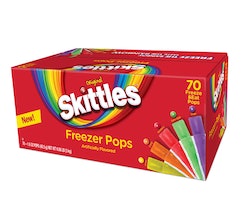 The only thing better than dessert is a dessert that’s made of even more dessert. That’s essentially what the new Skittles Freezer Pops are. They’re a frozen ice pop made to taste like the rainbow... or at least the rainbow, according to Skittles.

The Skittles Freezer Pops were first spotted in the freezer aisle earlier this summer, per PopSugar. As the name suggests, the ice pops come in five Skittles-inspired flavors: lemon, orange, strawberry, green apple, and grape. If you’re looking for new and delicious ways to consume your favorite fruity treat, this is exactly the Skittle-salve you seek.

The reviews are overwhelmingly positive with most people noting that the frozen pops taste almost exactly like Skittles. Really, the only negative reviews on Walmart.com are from a couple of people who got leaky boxes. To play it safe, you can buy your box in stores. Each box of 70 ice pops sells for just $6.98 at Walmart. In other words, you can get a nice, cold dose of nostalgia for 10 cents a pop. Not only will each pop remind you of your candy-coated childhood, it’ll help you cool down during the blistering heatwave we’re currently experiencing. If nothing else, these new Skittles Freezer Pops will be an excuse to eat candy to cool down.

Really want to go all out with your admiration for Skittles? You have more than a few options. In 2019, the candy brand launched Skittles Coolers in the U.K., a fruity ice cream bar jam-packed with rainbow Skittle pieces. Last year was apparently a blessed year for Skittles innovations as the brand also released Skittles Singles To Go, single-serving pouches of Skittle-flavored powder to mix with your water. So, not only can you taste the rainbow, you can drink it, too. Lest you think that the only drinkable Skittles creation made in the last year, think again. In October 2019, Taco Bell released a new Sour Skittles Freeze, a frozen drink that combined sour and sweet.

Why stop at Skittles when the internet is your candy-as-other-food oyster. There are Sour Patch Kids Cereal so you can absolutely have candy for breakfast. There are Nerds Slurpees, which I’m guessing would pair well with Taco Bell’s Sour Skittles Freeze. Even as recently as this week, The Cheesecake Factory released a new Chocolate Caramelicious Cheesecake made with Snickers. It has truly never been easier to classify candy as its own food group.

More like this
Dunkin’s Valentine’s Day Lineup Includes A Drink That Tastes Like Dessert
By Alexis Morillo
Ben & Jerry’s New Sundae Flavours Are A Chocoholic’s Dream
By Sophie McEvoy
Keep An Eye Out For These 5 Food Trends In 2023
By Isabella Biedenharn
16 Valentine’s Day Quotes About Chocolate That Will Make You Hungry
By Emma Cueto
Get Even More From Bustle — Sign Up For The Newsletter
From hair trends to relationship advice, our daily newsletter has everything you need to sound like a person who’s on TikTok, even if you aren’t.