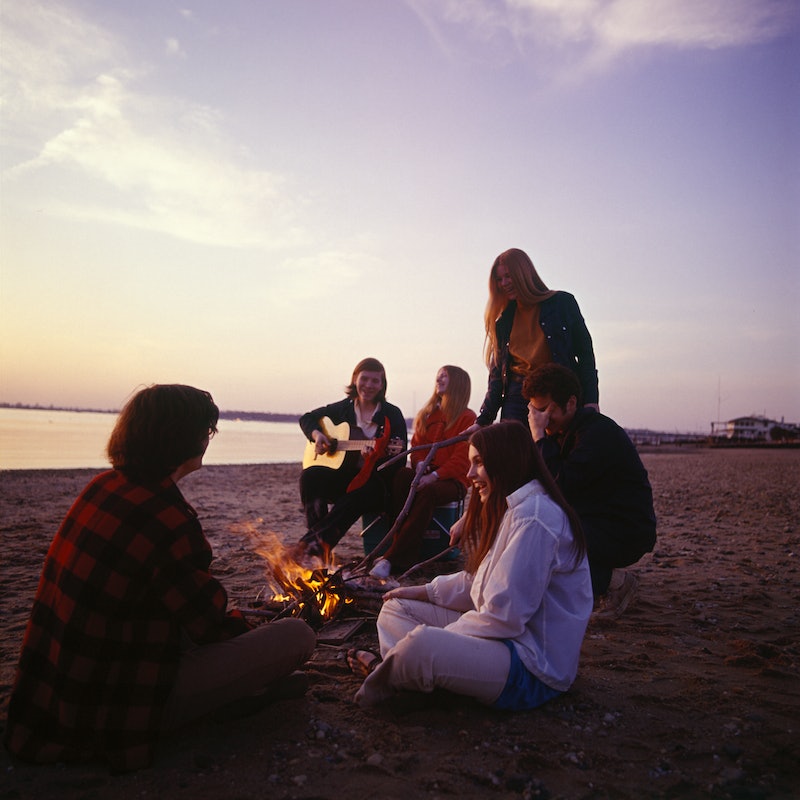 If you ever went to summer camp, or had an older sibling, or a particularly macabre set of school bus friends, you've probably heard spooky campfire stories before. In fact, you probably still wake up in a cold sweat some nights, thinking you can hear the distant scraping of a hook against a car door. And yet, you still can’t resist the urge to re-spook yourself every Halloween. ‘Tis the season to celebrate all things scary, rebranding them as festive.

Even if you weren't much for pitching tents and starting bonfires, you might recognize some of these creepy campfire tales from Alvin Schwartz's Scary Stories to Tell in the Dark. That's because Schwartz, like many ghost story writers before him, drew inspiration from American folktales and urban legends (and then he added those horrific illustrations from Stephen Gammell, to more effectively haunt our every waking thought). Most of these scary stories have no known origin, and no original author on record. They're good old fashioned oral tradition, kept alive around campfires, at sleepovers, and in the dark places beneath playground equipment. (Which means you can tailor them with whatever details you know will scare the pants off your friends the best.)

Here are some of the most memorably haunting stories that still make us feel all weird inside to this very day.

A pair of attractive teens are parked at Make Out Point (or Lover's Lane, depending on your version of the story), an isolated spot on the edge of town. The boyfriend switches on the radio for some mood music, and the two start canoodling. But just as things are getting hot and heavy, they're interrupted by a breaking news story: A murderer has escaped from the nearby state asylum. He's armed and dangerous, and he has a hook in place of his right hand.

The girlfriend is obviously frightened, and wants to go home straight away, but the boyfriend insists that they'll be fine. He locks all the car doors and tries to kiss her again. She calmly explains that no means no, and that she wants to go the heck home. Annoyed, the boyfriend slams the gas pedal and drives her back to her house. It's only when they both get out of the car that he notices something dangling from the door handle — a bloody, steel hook.

This one might be slightly more popular at sleepovers than campfires, but I bet that you're still just a little scared to actually try it. The story goes that if you look into a mirror in a darkened room and chant "Bloody Mary" three times, you'll see the ghostly visage of Bloody Mary herself staring back at you. That, or she'll pop out of the mirror and kill you. The real Bloody Mary was actually Queen Elizabeth's ill-fated older sister, and she's probably not coming to kill you — but staring into a darkened mirror for a prolonged period of time can cause very creepy hallucinations.

You might know this story as "The Blonde Wolf," which is admittedly not the creepiest of titles. But the story goes that a pregnant woman went into labor in a remote part of Texas. Her husband went for help, but both of their bodies were discovered the next day, ravaged by wolves. The baby was nowhere to be found. Over the years, sightings were reported of a little girl living with a pack of wolves, and later a grown woman, covered in hair, nursing wolf pups... and finally sightings of a strange-looking wolf with suspiciously human-like features.

Two college roommates are in the same science class, and the big midterm is tomorrow morning. Marie wants to stay in and study, but Tara wants to go out and party with a cute guy from the lacrosse team. She leaves Marie to her studies. When she gets home very late that night, Marie is in bed and the lights are off. Tara goes to bed without turning the lights on, trying not to disturb her studious friend. In the morning, she goes to wake Marie so they won't be late for the test... but Marie's body lies stiff, and her bed is soaked in blood. On the wall above her, scrawled in blood, are the words "Aren't You Glad You Didn't Turn on the Light?"

A babysitter has been hired to watch two children for the night. After she puts the kids to bed, the parents ask that she watches TV in their bedroom upstairs, because the children have been having nightmares recently. She puts the kids to bed easily enough, and settles in the parents' room to watch TV. But in the corner of the room there's a large, creepy clown statue, about life-sized. She tries to ignore it, but it's just too creepy. Finally, she calls the dad to ask if she can watch TV downstairs instead. "Sure, but why?" he asks. She tells him that the clown statue is just creeping her out too much. There's a pause. "Get the children and leave the house," says the dad. "We don't have a clown statue."

A man marries his beloved: a beautiful young woman who always wears a green velvet ribbon around her neck. On their wedding night, he asks why she never takes the ribbon off. "If I do, you'll be sorry," she says, and goes to sleep. Night after night, he keeps asking, but she always gives him the same reply. He begins to go mad with curiosity. Finally, one night, while she's sleeping, he steals the scissors from her sewing box and cuts through the ribbon himself. The black ribbon falls away... and her head rolls right off her neck and falls to the floor with a sickening thud.

"The Vanishing Hitchhiker" might be the most famous campfire story of all time. A couple are driving late at night when they notice a girl hitchhiking. They pick her up, and she thanks them profusely and gives them a nearby address. They drive her home, trying to make polite conversation. But after a few minutes, the girl falls silent. The driver asks if they've reached the right intersection, but when they turn to the backseat the girl is gone. She's vanished without a trace. When they reach the address she gave them, an elderly couple greets them at the door. They don't know of any girl... but their own daughter was killed in a car accident many years ago, just a few miles up the road.

A girl is just a little afraid of the dark, so every night her dog sleeps under her bed. When she's afraid, she puts her hand down, and her dog licks it to reassure her. One night, she wakes to hear a strange dripping sound. She puts her hand down, and feels the dog lick it, so she feels better and goes back to sleep. The next morning, she wakes to find the body of her dog hanging in the middle of the room, dripping blood. On the wall someone has written, "Humans Can Lick Too!" (The same murderer as that dorm room one? Possibly.)

A young woman is driving home late one night, when she notices a truck driving up directly behind her. No one else is on the road. She waits for the truck to pass her, but instead it stays directly behind her, and flashes its high beams. She becomes unsettled. No matter how fast she drives, or which back roads she heads down, the truck stays close behind her, flashing its high beams every few minutes. Terrified, she speeds home, with the truck right on her tail, and pulls into her driveway. She leaps out of her car and tries to run to her front door, but the truck driver gets out too — and he's holding a gun. He points the gun in her direction and shoots. The woman screams, but the bullet wasn't for her: She turns to see the body of a man fall out of the back seat of her car, clutching a butcher's knife. The shaken truck driver explains that he noticed the man in the backseat of her car, and was trying to signal to her. Every time the man raised his knife to stab her, he flashed his high beams.

In a small town, a man is taken by a newcomer — a widow who always wears black gloves, even inside. One day, he strikes up a conversation with her at the store, and as she brushes her hair out of her face, he notices gold gleaming through the glove of her right hand. She explains that she lost her hand in an accident, and instead of getting a traditional prosthetic, she treated herself to a solid gold hand. The man becomes obsessed with her hand. His heart beats for the the heavy, shiny, gold limb. He ends up courting the woman and eventually marrying her, only to poison her slowly. After only a month or marriage, she passes, and he buries her without the hand. One night, he wakes in a cold sweat to find the his bride standing at the end of the bed, gold hand intact. She strangles him with it and he goes limp. The next morning, a maid find the man, alone in his bed, with nothing but the golden hand gripping his lifeless neck.

A young woman is on vacation. She’s so relaxed while reading by the pool, that she falls asleep. When she wakes up, hours have passed. She stretches, and yawns, and notices that her face feels sore. She goes inside to find a mirror, assuming she just got too much sun. Only, she has a giant red blemish on her cheek. It looks like a pimple, and it feels like a pimple, so she washes her face and tries not to think about it. The next morning, the spot has grown. It’s swollen, bulging, and very painful. She places a hot washcloth on her cheek and then examines the sore in the mirror. She gives it a little squeeze and what looks like a long black hair pokes out of the bump — but it moves. She shrieks and the spot bursts open, releasing dozens of baby spiders. Blood and pus and fast-crawling insects ooze down her neck, biting her everywhere.

This article was originally published on Oct. 28, 2016