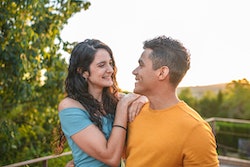 Taurus and Aquarius are two signs that you wouldn’t think would be attracted to each other. For instance, Taurus has a more traditional approach to relationships. They enjoy being wined and dined the old-school way, like taking things slow, and are most comfortable when they stick to a routine. Aquarius, on the other hand, is the unique and unconventional water bearer. They’re innovative, love pushing boundaries, and become easily bored with relationships that become too predictable. But despite these differences, the bull and the water bearer balance each other out pretty well. Taurus and Aquarius’ zodiac compatibility will tell you what you need to know about this fixed sign couple.

In general, earth and air sign pairings don’t always make the best matches. Earth signs tend to get along more with water signs, and air signs are better suited for fire signs. However, astrologer Simone Pinkhasova tells Bustle, “Taurus and Aquarius express contrasting elements and qualities of the zodiac in a way that complements each sign.”

For instance, Taurus is ruled by Venus, which is a “feminine” energy that brings about pleasure, playfulness, and passion to the relationship. On the other hand, Aquarius is ruled by the more “masculine” Uranus, the planet of chaos, sudden change, and upheavals. Aquarius will keep the relationship moving forward, while Taurus will infuse it with warmth and affection. Keep reading to learn more about Taurus and Aquarius’ compatibility in sex, dating, friendships, and relationships.

Sexually, Taurus and Aquarius are “built quite differently,” Stephanie Gailing, astrologer and author of The Complete Guide to Astrological Self-Care, tells Bustle. Taurus is all about the tried-and-true, while Aquarius is more into what’s new and offbeat.

Taurus is a sensual sign who enjoys being romanced and seduced. They want to be touched and kissed and to explore their partner’s bodies, too. According to Gailing, the atmosphere is also important to them. “If the lighting or music is off, it can be a buzzkill,” she says. An air sign like Aquarius is less in tune with the physical world. For them, a stimulating conversation that eventually turns to flirtation or dirty talk is what puts them in the mood. They also love experimenting.

When it comes to the bedroom, Taurus and Aquarius will have to communicate to understand each other’s needs. If they can get on the same page, Gailing says both signs are thought to have great endurance and can have a great time together.

As two fixed zodiac signs, Taurus and Aquarius have a basic understanding of each other’s approach towards life. They also have similarities in the way they process and express emotions. According to Gailing, they can be emotionally stubborn, too attached to what they feel, and slow to open up. “With two people entrenched in their views, there may not be much space to maneuver emotionally,” Gailing says.

Aquarius also has a reputation for being on the emotionally cold side. They’re logical and tend to rationalize their feelings before allowing themselves to just give in and experience them. Taurus loves affection and may need reassurance from their partner every now and then to feel secure. According to Gailing, “Taurus may find Aquarius a bit too detached at times, whereas Aquarius may feel that Taurus’ need for comfort gets in its way of being objective and seeing the whole picture.”

When it comes to friendship, the Taurus-Aquarius combination is a “head-scratcher,” Inbaal Honigman, celebrity psychic and astrologer, tells Bustle. In general, earth and air elements don’t make the best match. However, it’s not all bad. Taurus is generous and dependable, while Aquarius is selfless and optimistic. “These are qualities which don't clash, but don't really attract,” she says. “They're both very individualistic and neither has a tendency to be clingy. It's an odd combination of signs, more likely to be found co-running a charity or an academy, than be involved with each other on a personal level.”

Since they’re both fixed signs they can be stubborn and set in their ways. According to Honigman, a childhood friendship between a Taurus and Aquarius could last forever. It’s one of those friendships that’ll stick just because they’re both loyal and have known each other for a long time. “Later on in life, however, they won't be willing to invest the effort in a new friendship unless something unique happens, like a specialist interest or a humanitarian cause throws them together,” she says.

Taurus is ruled by the romantic and elegant Venus, which is a planet associated with beauty, femininity, and love. Aquarius, on the other hand, has been traditionally ruled by Saturn, which is all about maturity and responsibility. “If the Taurean brings the love together with their big heart, the Aquarian will keep it going with their honesty and loyalty,” Honigman says. “That is, if there’s an initial attraction in the first place.”

Honigman gives the example of George Clooney, a Taurus, and his wife, Amal, an Aquarius. “The attraction between them has nothing to do with being two of the hottest people on Earth, and everything to do with wanting to make the world a better place,” she says. “They demonstrate the very vibe of this unusual but fascinating combo."

The bull and the water may have some trouble connecting intellectually as they tend to have different interests. “Taurus reveres the beauty of physical objects and the natural world, while Aquarius lauds the beauty inherent in innovation and social progress,” Gailing says. “Taurus’ wanting to talk about sybaritic pleasures may not pique Aquarius’ interest, whereas Aquarius’ sharing things that have a scientific bent may be less than interesting to the bull.”

Incompatibility in this area may be an issue for Aquarius, who needs to be mentally stimulated to stay interested. They’re curious signs and will enjoy getting to know Taurus. But once that initial curiosity wears off, they may find that Taurus isn’t that right match for them. On the flip side, Taurus may feel like Aquarius is too much of a know-it-all.

Do Taurus And Aquarius Make A Good Match?

Overall, a Taurus and Aquarius relationship isn’t the best match, nor is it the worst. As two fixed signs, they can butt heads a lot, but they’re also made for long-term, stable relationships. If they can communicate and make a commitment to each other, they can make a good match.