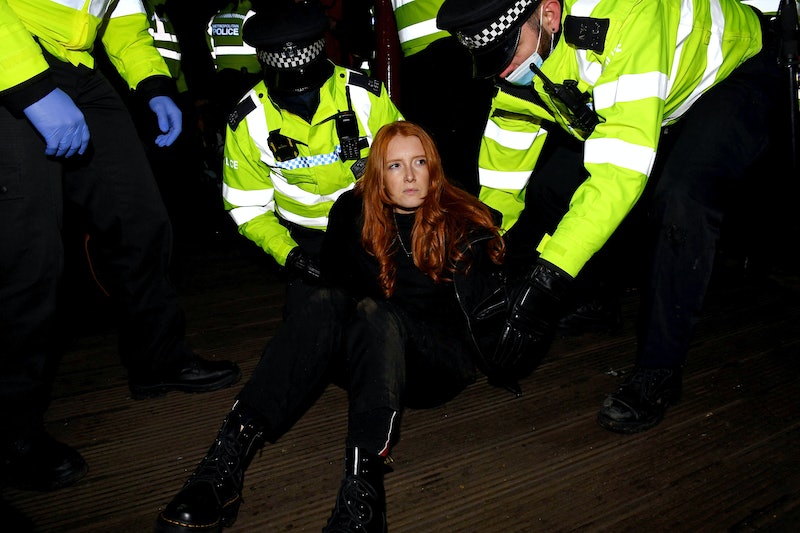 On March 13 Patsy Stevenson was among the hundreds of people who headed to Clapham Common to mourn the death of Sarah Everard, who was murdered by Met Officer Wayne Couzons ten days earlier. As chaos erupted between demonstrators and police, Stevenson was photographed being pinned down and arrested, and the image went viral. In the months that followed, Patsy Stevenson claims she has been sent multiple death threats and, in recent news, the 28 year old student says she has been contacted by “about 50 police officers” on Tinder. Stevenson, who has launched legal action against the Met for her vigil arrest, has said that she is now “terrified,” also alleging that officers had approached her on the dating app because they knew she was “fearful” of the police.

Who Is Patsy Stevenson?

Many have seen the photos and videos of Patsy staring directly into the camera as she was being arrested by police officers at the candlelit event in March. After the photo went viral, the 28-year-old physics student from Southend was quickly thrust into the media spotlight and many publications controversially dubbed her “the face of the vigil”.

Stevenson was initially reluctant to accept the title as an activist, telling Good Morning Britain in March that she is “not an activist” and had simply gone to the vigil to “lay a candle down” before she was forcefully arrested by the police. However, writing for the Independent, she said Sarah Everard’s death “fuelled a fire” in her fight against misogyny. “I decided that I wouldn’t step down, I wouldn’t back away and I would project my voice louder,” she wrote.

Patsy Stevenson and many others who attended the Sarah Everard vigil were arrested as the event was considered illegal under lockdown restrictions. Following her arrest, Stevenson was charged £200 fixed penalty and she is currently pursuing legal action against the Met police force.

Speaking to BBC News on October 6, Stevenson said that she has been approached by "about 50" messages from police officers and security guards on the dating app, Tinder.

They were all in uniform on their profiles or it said “I'm a police officer,” Stevenson claims.

She continued: “I do not understand why someone would do that. It is almost like an intimidation thing, saying 'look we can see you', and that, to me, is terrifying. They know what I went through and they know that I'm fearful of police and they've done that for a reason.”

Stevenson later clarified on Twitter that had purchased Tinder Gold, a feature on the dating app which allowed her to see who likes her without having to match with them.

“I could see who liked me, I didn’t match with them. There were 50 at the same time,” she tweeted.

Elsewhere, Stevenson says she has received messages threatening to kidnap her and told the broadcaster that she “can't count the amount of death threats I've had.”

“Now there's always that fear when I'm out and I see someone staring at me,” she said, adding “I just want to be able to live the way you live without fear. But then again, I'm a woman.”

What Have The Police Said In Response?

The Met has advised Stevenson to contact them to provide more information so they can “work to establish if any MPS officer is involved [and] whether any misconduct may have occurred,” per BBC News.

This news has come at a time when the Metropolitan Police Force is under intense scrutiny, with calls for the service to address why and how Couzens was able to continue working for them despite allegations against him of indecent exposure.

As Bustle reported, it has recently been revealed that 771 Metropolitan Police Service employees faced sexual misconduct allegations between January 1, 2010, and May 31, 2021.