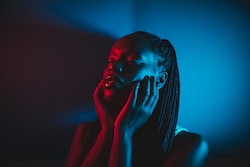 Nobody likes retrogrades. We're all familiar with the headache-inducing Mercury retrograde periods, which happen several times a year and bring all sorts of mix-ups to our communication and timing. However, contrary to popular belief, retrogrades are actually here to help us. Every major planet takes a backspin during the course of this year, but Uranus retrograde 2020 (which began on August 15) has the potential to be particularly positive and helpful for all zodiac signs' personal growth.

Uranus is the rebellious planet that rules over things like sudden changes, bursts of inspiration, and forward-thinking innovation. Its energy balks at tradition and embraces the weird, avant-garde, and unexpected sides of life — and its annual retrograde periods can be just as revolutionary as any of its other transits. "Usually, when a planet retrogrades, it loses its powers — but Uranus is different," astrologer Narayana Montúfar tells Bustle. "As the shocking planet that it is, its effects — whether retrograde or direct — are unpredictable, and never, ever boring."

Uranus retrograde is nothing to fear. And if you play your cosmic cards right and open your heart to change, you'll understand that it can easily be one of the most useful retrogrades of 2020.

As wildcard planet Uranus backspins, we'll have an opportunity to start adjusting to some of the life-altering shifts that have been thrust upon us since the start of 2020 in a more realistic way. "As Uranus retrogrades from now until the beginning of 2021, we are given the chance to revise all the change we have been going through this year," Montufar says. The astrology of 2020 has been a whirlwind, so use the coming months to be present with your new reality and acknowledge the ways its changed you. You'll enter 2021 feeling a lot more grounded than before — and even more ready to ride the roller coaster of life.

Uranus transits bring the energy of evolution and revolution. On a collective level, revolution is obviously all around us (and this will continue astrologically through the rest of the year) — and during Uranus retrograde, we'll have a chance to evolve on a more personal level, too. "For the next [five] months, while sudden and shocking changes knock at your door, Uranus asks you to give up the beliefs, people, and material possessions that no longer serve you," Montufar says. "Be willing to let go and take it as an opportunity to give yourself that amazing upgrade you’ve been waiting for."

While Uranus retrograde's energy may shake up your life in unforeseeable ways, try to view these shifts as as a form of necessary restructuring. The coming months are a time to loosen your grip on your perceived reality and acknowledge that you simply can't be in control of everything — but you can control your ability to continually grow, adapt, and evolve into a better version of yourself.

In The End, You'll Come Out Feeling More True To Yourself

The best part of this year's Uranus retrograde? If you accept life's surprises as they come and allow yourself to continually shapeshift to adapt to new circumstances, you'll come out the other side of this transit feeling so much more authentic. Stop worrying about what other people think and start doing what feels true to you. "Uranus' #1 mantra is 'the only constant in life is change,' and embracing that will help you get to your next destination," Montufar says. "Uranus is the awakener whose job is to keep us faithful to what makes us unique, fascinating, and weird."