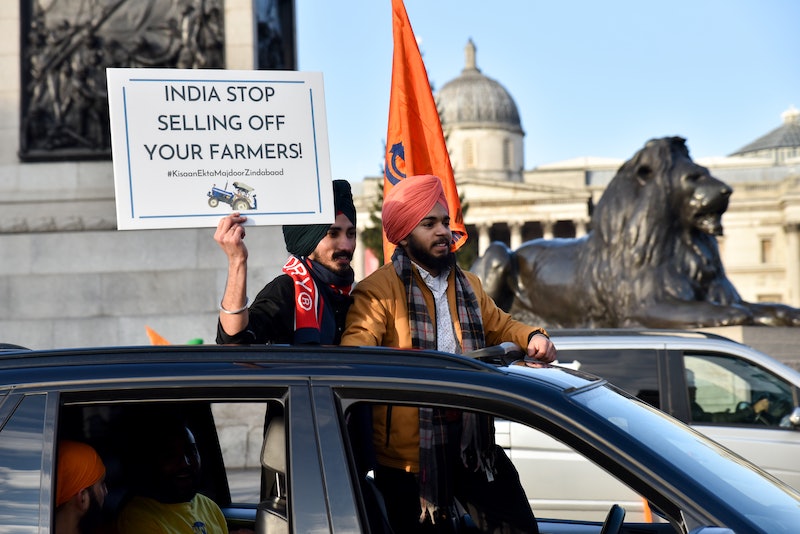 Thousands of farmers across India continue to protest controversial new laws which they say threaten their livelihoods. From Nov. 2020, more than 250 million workers went on nationwide strikes, blocking New Delhi roads with peaceful marches and tractors, and some took part in hunger strikes sparking solidarity protests in the UK and around the world. On Jan 27. 2021 tensions escalated during a violent clash between farmers and law enforcement (Jan.26) in New Delhi, resulting in the death of one protestor and the detaining of 200 others. Here's everything you need to know about the Indian farmers' protests.

Why Are Indian Farmers Protesting?

India's new reform is based on three main laws that would see the deregulation of India's agriculture sector. Per Reuters, these laws mean "the end of price support for staples such as wheat and rice" and would loosen rules around the sale, pricing, and storage of farm produce.

Previously, the Indian government offered guaranteed prices to farmers for certain crops and produce. Under the reform, small farmers fear that large corporations could exploit the agricultural sector by "driving down prices", which would drastically reduce their income.

On Jan. 26 the protests reached a fever pitch when farmers took to the streets of New Delhi during India’s Republic Day celebration. The otherwise peaceful demonstration became violent as protestors clashed with the police and stormed the Red Fort, a 400-year-old landmark. The clashes left hundreds injured on both sides including the death of one protester, however, farmers pledge to continue their protests and, per New York Times, will be marching on foot to India’s Parliament on Monday.

What Has The Indian Government Said?

This comes after Prime Minister Narendra Modi refused to back down, despite growing pressure from demonstrators. Via Sky News, the Indian official claimed the changes would "draw investment in agriculture and benefit farmers."

Speaking at the Federation of Indian Chambers of Commerce and Industry on Saturday (Dec. 12), Modi said the aim of the government reforms is "to make farmers prosperous". Other proposed benefits include farmers being able to set their own prices and selling directly to private companies such as supermarkets.

Despite a number of talks between government officials and farmers’ union leaders, the two sides have failed to find a resolution or come to an agreement. Back in December, farmers rejected a government proposal to amend the legislation, as reported by Reuters.

Meanwhile, protesters have made their demands clear. “We want them to repeal the laws,” said Gurbax Singh, a protest leader from the northern state of Punjab, which is at the forefront of the opposition. According to Reuters, Singh and other leaders went on a hunger strike at the main protest site.

Why Are People Protesting In The UK & Beyond?

"No farmers, no food" read protest signs from London to Leicester last year, with many people in the UK deeming the farmers' plight a human rights issue. It's worth noting that 70% of India's rural households still depend primarily on agriculture for their livelihood, says the United Nations.

There are also concerns that the reforms could have repercussions globally. A quick look inside most kitchen cupboards and you'll likely find something made in India. The UK is one of the major importers of Indian spices, and India is the largest producer, consumer and exporter of spices in the world. Not to mention that the country is the second-biggest supplier for cotton, rice and wheat, as well as exporting many more products

At the heart of the solidarity protests are the family and members of the Indian diaspora in the UK, who feel a personal connection with the farmers' protests. Speaking to the BBC, Satinderpal Gosal, 29, from Willenhall in the West Midlands, explained why he was compelled to join London's protests. "I'm a very proud Punjabi, even though I'm born in the UK," he said. "But generations of my family have put their blood, sweat, and tears into the farming in Punjab."

"Farming is the essence of that region. It is the heartbeat of the Punjabi people and it's our heritage," Gosal continued. "So I feel it is our duty. We could not sit at home in the warm when our ancestors are suffering. We have to support them and show there are people out there listening to what's going on."

What Has The UK Government Said?

The UK government has so far avoided commenting on what's happening. Slough MP Tanmanjeet Singh Dhesi, former Labour leader Jeremy Corbyn, and 33 other MPs have signed an open letter calling for Foreign Secretary Dominic Raab to back the farmers' protests. Per the Times Of India, the letter referred to the new farm laws as a "death warrant" for "India’s breadbasket." They're urging Raab to raise the issue with his Indian counterpart. However, the foreign secretary has said the issue was "a matter for the government of India."

On Dec. 9, Dhesi rose the issue during Prime Minister's questions, asking for Boris Johnson's thoughts about the demonstrations in India. In his response, Johnson appeared to confuse the situation with the ongoing conflict between India and Pakistan, saying "Our view is that of course we have serious concerns about what is happening between India and Pakistan but these are pre-eminently matters for those two governments to settle." A spokesperson has since said the prime minister misheard Dhesi.

How To Help From The UK