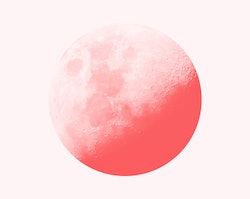 In astrology, each zodiac sign is ruled by a planet that gives it its hallmark traits. In the case of the wildly intuitive and empathetic crab, Cancer’s ruling “planet” is not only responsible for pulling the ocean tides, but also for giving the sensitive water sign the emotional flair and keen gut feeling they’re blessed with. Yes, Cancer is ruled by the moon, one of two zodiac signs whose rulers are technically luminaries, not planets. (The other is Leo, which is ruled by the sun.)

Astrologer Lauren Ash explains that in astrology, the moon symbolizes the subconscious mind, emotions, and intuition. “In a birth chart, your moon sign will show you how you express your emotions, how you nurture other people, and can even symbolize the mother and the relationship between a mother and child.” When you’re looking at the moon in relation to its transits and how it affects the collective as a whole, it represents the conflict between emotions versus our ego and logic according to Ash. That’s why Cancers are recognized for their psychic abilities and knack for picking up emotional cues.

Even if you’re not a Cancer, learning about the water sign’s planetary ruler is a great way to piece the rest of your birth chart together and get in-tune with your emotional side. Keep reading to learn more about Cancer’s planetary ruler.

All About The Moon, Cancer’s Ruling Planet

The moon is the only celestial body other than Earth that humans have visited, so our knowledge of it is pretty expansive. Ancient people used la luna as a calendar and way to tell time. Its changing face helped mark seasonal cycles, too. Many ancient cultures associated the moon with feminine energy: For the Incas in South America, the luminary was personified by a goddess named Mama Quilla, who helped regulate menstrual cycles.

“In astrology, the moon symbolizes the mother and the relationship between a mother and child,” explains Ash, which shows why Cancers are often seen as being maternal and compassionate.

The Moon’s Influence On Cancer

Since the moon is all about the subconscious workings of the self, Cancer zodiac signs are naturally intuitive and in-touch with their own feelings as well as those of others. Cancers are naturally able to flow with the emotional spectrum without overanalyzing their feelings or pushing them away entirely. They also have an innate ability to build trust in relationships.

“The moon heavily influences your interpersonal relationships, as well as how you intuitively see the world around you,” explains Ash. Cancers rely on their feelings and gut instincts to make decisions and would rather sit in their feelings and listen with compassion than explain them away with logic.

Their ruling planet also lends the water sign its ability to tap into their gut feelings with ease. That’s because the luminary symbolizes intuition, allowing Cancers to trust their instincts without giving it a second thought. Their sixth sense puts them in a constant state of self-awareness.

If you have a Cancer moon in your birth chart, Ash explains that you’re deeply connected to your inner self. “Having a natal moon in Cancer heightens your emotional sensitivity and intuition more than others,” Ash says. A Cancer’s responsiveness gives others a type of motherly comfort they can trust.

More like this
Eleven From ‘Stranger Things’ Is A Cancer Zodiac Sign, An Astrologer Says
By Brittany Beringer
Your July 2022 Monthly Tarot Reading
By Jezmina Von Thiele
Here’s Your Horoscope For July 2022
By Alexandria Lettman
June’s New Moon In Cancer Will Affect These 4 Zodiac Signs The Most
By Brittany Beringer
Get Even More From Bustle — Sign Up For The Newsletter