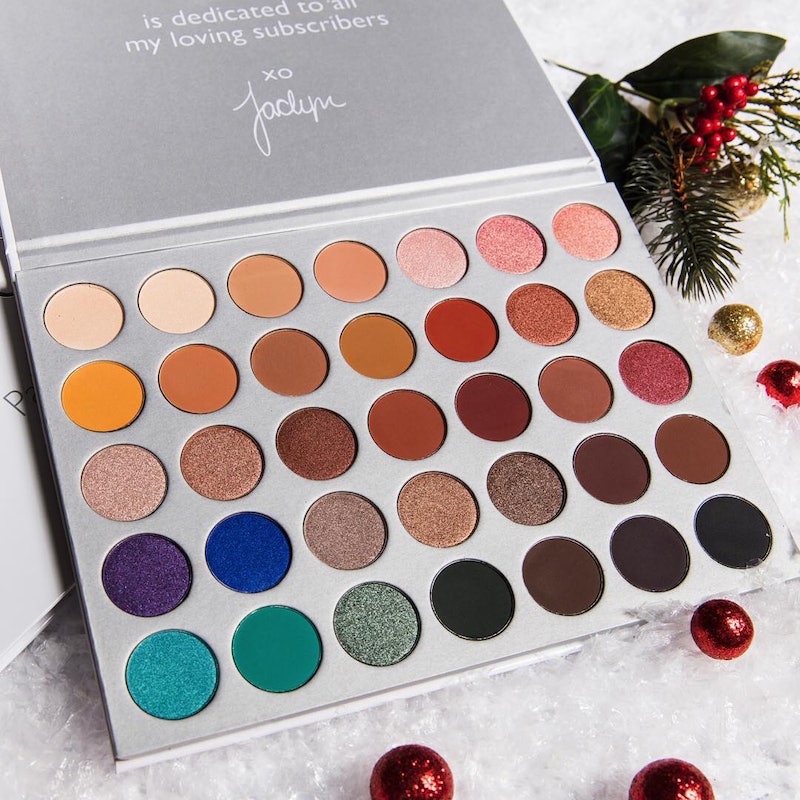 For beauty gurus, milestones seem to revolve around subscriber count. Whether it's 100,000 followers on Instagram or 2 million subscribers on Youtube, these are huge accomplishments. Now, one of the most popular gurus can add another feather in her cap. 1 million Morphe x Jaclyn Hill palettes were sold in 2017, and there's still more time left in the year.

Jaclyn Hill already has the milestones of a major beauty brand collaboration — Champagne Pop, anyone? — and 4.7 million Youtube subscribers, but her latest collaboration is yet another. Hill took to her Twitter on Thursday evening to announce that 1 million Morphe x Jaclyn Hill palettes have been sold, and that's a major number.

For fans of Hill, however, the incredible accomplishment wasn't surprising. Hill had been working on the palette for two years before its debut over the summer, and she clearly put her heart and soul into the product. From creating all 35 of the beautiful shades to working with Morphe on the formulation, she took serious control of this project, and fans knew she rocked it. One glance at how many times it sold out before becoming a permanent Morphe product will tell you that fans were in love from the second it debuted.

Of course, purchasing the palette as a means to support Hill is incredible, but fans were also quick to praise the YouTube guru and all of her success with Morphe.

Fellow guru Lauren Curtis was quick to congratulate Hill on her success, and it was such a cool display of women supporting other women.

Some fans celebrated with Hill using a bit of humor.

Others were quick to praise the quality of the palette itself insinuating that of course Hill would sell 1 million and counting.

With the holiday here, of course fans had to let her know that they'd purchased her palette for friends during the holiday season.

Perhaps some of the most meaningful responses, however, have come from makeup artists who admire Hill, her work ethic, and her love for fans and family. She's truly an inspiration for many, and they're more than happy to celebrate her successes.

Both Hill and Morphe have also been incredibly generous with the palettes. The guru and Morphe actually hosted a giveaway, and it's was good one, too. For the holiday season, the pair teamed up again to give away 100 signed Jaclyn Hill x Morphe palettes. Yes, you read that right. A whopping 100 will be given for free, and while the giveaway is undoubtedly exciting, it's unfortunately closed as of 11am ET on Dec. 22.

Thankfully, however, Hill is known for gifting palettes. Not only is she giving them away in her 12 Days of Christmas giveaway that she's hosting on her own over on her Instagram, but with 1 million palettes sold, there's always a chance that she and Morphe could decide to host yet another giveaway in order to celebrate the milestone.

As for what's next for Hill, she's been open about working on her own makeup line, and things are look bright for her fans in 2018. While the guru hasn't officially announced when the line will come out, back in November she told fans that she is working on names for the mystery products. Names seem like a pretty final step in production, so could 2018 be the year of Jaclyn Hill Cosmetics?

Regardless of when Hill's makeup line comes out, there's little doubt that she accomplished so much already. From her BECCA collaboration, to her incredible reach as a makeup artist on Youtube, and now to selling 1 million Morphe x Jaclyn Hill products, the sky seems to be limit for this guru.