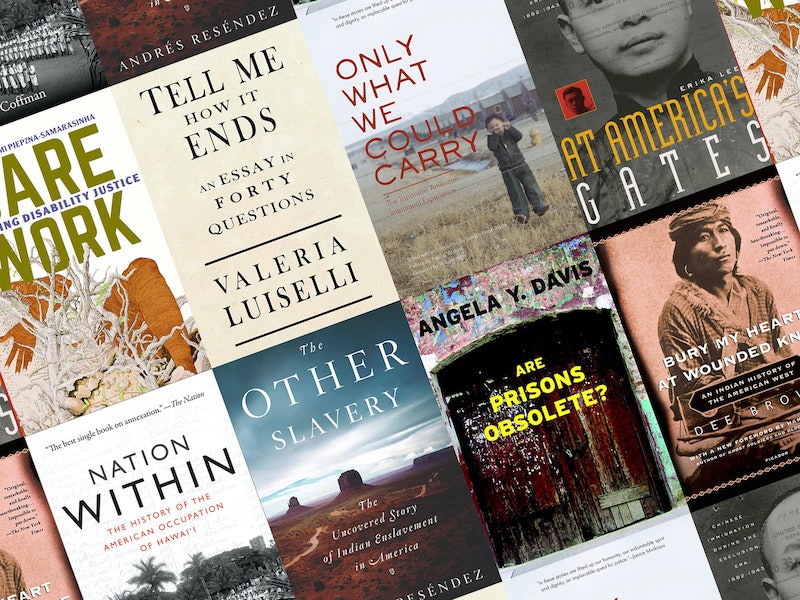 Many people view Independence Day as a time for gathering and celebrating the freedoms provided by living in the U.S. Not everyone in this country is able or allowed to exercise those freedoms, however. For your reading pleasure this July 4, I've picked out 10 books about American history and politics that complicate the idea of "independence," because for a country that claims to be all about freedom, we certainly make sure that only the "right" kinds of people have access to life, liberty, and the pursuit of happiness.

In addition to locking up U.S. citizens of color, the country also separates Hispanic and Latinx immigrant children from their families, and detains them in horrific living conditions, which many have compared to Nazi concentration camps. That's not taking into account the system of Japanese-American internment that detained and disenfranchised 120,000 citizens during World War II, claiming their homes and businesses in the name of... well, we still aren't sure about that.

Did I mention the fact that disabled people often have to give up basic rights and forgo working in order to afford housing? Or that the U.S. government destabilized and took over sovereign nations in order to monopolize fruit trade? Seriously, folks, I can't make this stuff up.

The U.S. might claim it's a place of freedom, but not everyone here is free. Not even close. Here are 10 books you should read if you want to dig into the realities of American "independence."

More like this
The UK Government Is *Finally* Banning Conversion Therapy
By Sophie McEvoy
Prince Harry Incorrectly Recites Christina Aguilera’s “Genie In A Bottle” Lyrics
By Jake Viswanath
I Read Prince Harry's 'Spare' So You Don’t Have To: 11 Highlights To Know
By Marina Watts
'Mayfair Witches' Already Changed 2 Major Characters From The Books
By Grace Wehniainen
Get Even More From Bustle — Sign Up For The Newsletter
From hair trends to relationship advice, our daily newsletter has everything you need to sound like a person who’s on TikTok, even if you aren’t.