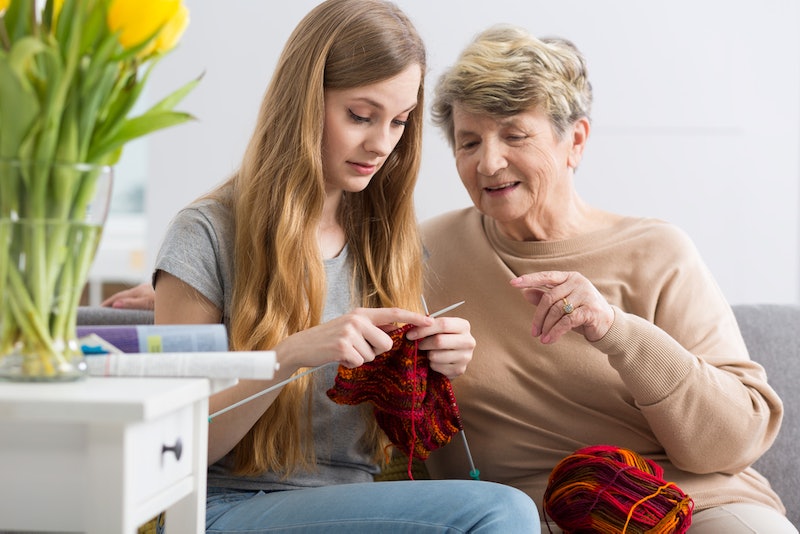 As people get older, there's a chance they'll experience age-related forgetfulness, which can include misplacing things around the house, blanking on someone's name, or using the wrong word. And these things can certainly seem like the early symptoms of dementia. But unless the person's life is majorly impacted, it isn't necessarily the case.

"The main difference between age-related memory loss and dementia is that in normal aging the forgetfulness does not interfere with your ability to carry on with normal daily activities," Verna R. Porter, MD, neurologist and director of the Alzheimer's Disease Program at Providence Saint John's Health Center, tells Bustle.

It may be frustrating, Dr. Porter says, but the person will still be able to carry on with their day-to-day life. "In contrast, dementia is characterized by marked, persistent, and disabling decline in two or more intellectual abilities such as memory, language, judgment, or abstract reasoning that significantly interfere with and disrupt your normal daily activities," Dr. Porter says.

While dementia can occur at any age due to various health issues or injuries, it's typically associated with Alzheimer's disease, and doesn't occur until later in life. Many causes of dementia begin at age 65, and about half of the population will become diagnosed with it if they live past 85, Susan London, LMSW, director of social work at Shore View Rehabilitation and Nursing Center, tells Bustle.

Dementia doesn't affect everyone, but it's still good to know the signs. Read on below for some of the earliest symptoms of dementia, according to experts.

More like this
This Company Will Send STI Tests Right To Your Door
By Lexi Inks
These Are The 3 Most Mellow Zodiac Signs
By Kristine Fellizar
6 Unexpected Causes Of Post-Workout Fatigue
By Carolyn Steber
I Visited Remedy Place, The Social Club Transforming The Wellness Industry
By Rachel Lapidos
Get Even More From Bustle — Sign Up For The Newsletter