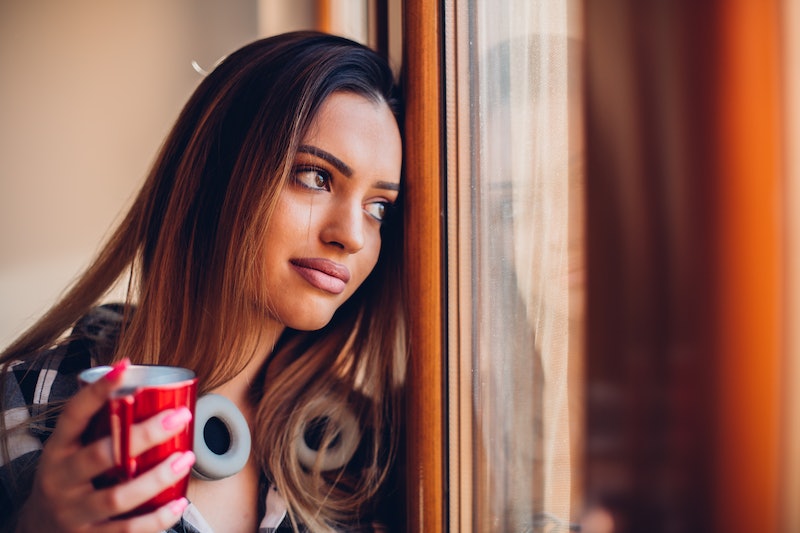 While you may feel far too young to care about the early warning signs of Alzheimer's Disease, it's not something that only strikes the elderly. Sure, the disease generally affects those older than 65, according to WebMD. But it can occasionally develop in your 30s or 40s in what's appropriately referred to as early-onset Alzheimer's.

While the thought of the cognitive decline, confusion, and mood changes associated with the disease is scary, please don't get too freaked out. Only about 200,000 people have the early-onset form of the disease, Dr. Fred Pescatore, MD, MPH, CCN tells me. It is, however, a good idea to be informed — and keep an eye out for — any early signs of a problem.

It's also a good idea to take preventative measures now as a way of lowering your chances of developing the disease. This, unsurprisingly, simply involves taking care of your health. Go outside (for that dose of vitamin D from the sun), add exercise to your routine, and do your best to avoid "white" foods.

As Dr. Scott Schreiber says, "Many of the foods that are associated with Alzheimer's include processed and 'white foods.'" (Think white bread, rice, pasta, American cheese, popcorn, cold cuts, and even beer.) "Not only have these been linked to Alzheimer's, but also raise systemic inflammation, which has been speculated as another cause." While you don't have to be "perfect," it's always smart to look after your health. And, of course, you should see a doctor if any of the signs below sound familiar.

1. You're Always Caught Staring Off Into Space

While it's fine to occasionally space out at work, it's not exactly normal to constantly have a 100 yard stare. Since Alzheimer's is known to cause changes in the cognitive and executive functioning of your brain, staring is often an early warning sign of the disease, according to health writer Andrea Atkins on HuffingtonPost.com.

2. You Can't Manage A Budget To Save Your Life

If you were always good at handling your money, take note if you suddenly can't manage a budget, Schreiber tells me. Forgetting to pay bills, or consistently blanking on how to manage your bank account, might be an early sign of a problem.

OK, some people are horrible at remembering names and always will be. So if this is you, it does not mean you have Alzheimer's. But if it's happening out of the blue and with increasing frequency, it may be cause for concern, Schreiber tells me.

4. You're Struggling To Find Your Words

Issues with word retrieval can be another early warning sign, Pescatore tells me. You might find yourself losing your words halfway through a story, or blanking on what you had for breakfast. While it can be chalked to up to a dozen other problems, it may be something worth getting checked out.

5. You Keep Forgetting How To Use Certain Objects

It's not a great sign if you find yourself forgetting how to use your keys, according to Atkins. Misplacing them on a busy morning is one thing. But forgetting what, exactly, a key is used for can be an early sign that Alzheimer's is setting in.

While there are a million and one reasons why you might feel the need to eat more, the onset of Alzheimer's may be one of them. You might even find yourself eating inedible things. If your brain is becoming diseased, it can start react improperly to your body's hunger signals, according to Atkins. Scary (and strange), but true.

7. You Keep Getting Lost In Familiar Places

If take the train every day, but suddenly can't make your way through the station, it may be time to see a doctor. As Schreiber tells me, getting lost in familiar places is an early warning sign of the disease.

8. You Can't Remember What Day It Is

Forgetting what day it is due to a packed schedule is a-OK. But constantly forgetting the date, or what season it is, isn't as normal. "The earliest warning sign is usually forgetfulness," says Schreiber. While symptoms vary from person to person, this is one that's worth watching out for.

9. You Keep Breaking The Law

Have you gotten caught shoplifting or running red lights? It may be because your brain is beginning to let you down. As Atkins said, "People’s executive function — their ability to make decisions — can be affected by the disease, which may explain why they become unable to discern right from wrong."

10. You Keep Finding Your Wallet In The Fridge

Finding your things in odd places — like your keys in the shower, or your wallet in the fridge — can point to a problem, Pescatore tells me. This is especially true if you can't retrace your steps and find missing things.

11. You're Bad At Recognizing Sarcasm

Not everyone "gets" sarcasm 100 percent of time, so don't panic if you miss a joke. Do take note, however, if you find yourself suddenly taking sarcasm very literally or seriously, according to Atkins. It may be a sign of atrophy in your brain.

Struggling to keep up during a convo? It may be worth worrying about. "Those with Alzheimer's have trouble remembering what the conversation topic is," Schreiber says. "Some even have trouble joining and following as the conversation moves ... When this begins to affect daily life, it is cause for concern."

13. You're Suddenly Struggling With Depression

Depression, as it relates to Alzheimer's, generally strikes those over the age of 50. So, while it may not be quite time to worry, it's definitely something to look out for. As Atkins said, "One study showed that people who suffered from depression after age 50 were three times more likely to develop an Alzheimer’s-related disease, Vascular Dementia, than those that did not."

Keep in mind, however, that most of these symptoms are usually a sign of something way less scary than Alzheimer's disease. But if you're feeling forgetful, keep getting lost, or are suddenly feel all sorts of confused, it is definitely worth getting checked by your doctor.