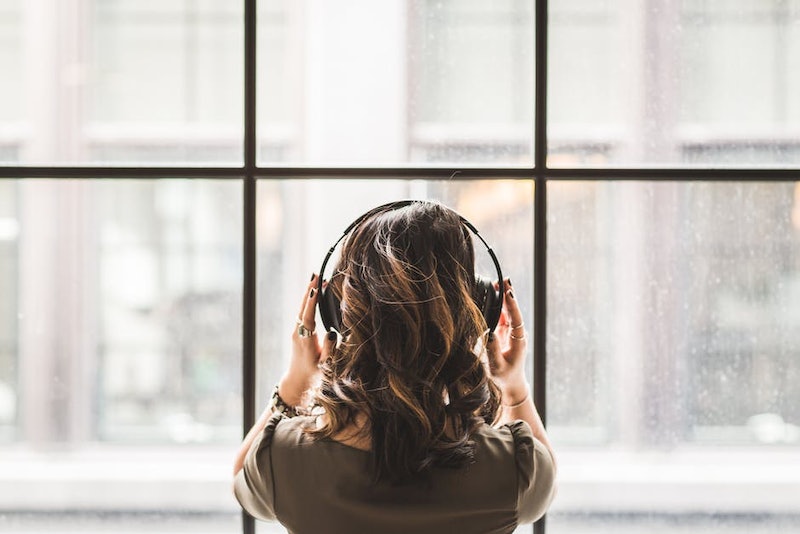 It's normal to have a few paranoid thoughts throughout the day. You might, for example, worry that your boss is mad at you, even when she isn't. Or, it might feel like your friends are talking behind your back, despite the fact they'd never do that. Generally, these little suspicions can be chalked up to stress or a bad mood. But if they're severe, ongoing, and truly impacting your life, they may be a sign of a deeper issue, such as paranoid personality disorder (PPD).

The word "paranoid" gets thrown around a lot, so it's important to understand that it doesn't mean you're a worrier. "I think there is a difference between paranoid as it's understood by the general public and the clinical term," psychologist Todd Bennett Psy.D, LPC, ACS tells Bustle. You might occasionally feel paranoid at work, like I said above, but that doesn't mean you're paranoid in the clinical sense.

"Paranoia is also different from Generalized Anxiety Disorder, which is when someone worries about a lot of different things [that are] likely to occur or not, [and] OCD, when someone has a reoccurring thought pattern about something specific," Bennett says. "In the raw clinical sense, the term 'paranoia,' when referenced as a disorder, is only used in reference to a personality disorder, in which there is a longstanding pattern of distrust and suspicion that others are 'out to get them.'"

Here are a few examples of these types of paranoid thoughts, which might indicate you have a paranoid personality. If any of them sound familiar, don't be afraid to chat with a therapist to figure out what you should do next.

1. It Seems Like Everyone Is Out To Get You

If you're plagued with paranoid thoughts, you might think other people are always up to something. "You spend a large portion of your day wondering if and how others are out to get you," Bennett says. And everything — why your friends invited you to a party, or why they didn't invite you — becomes a conspiracy.

2. Your Thinking Has Become Rigid

When a friend or family member offers a differing view point or possible explanation for your paranoia, you struggle to accept it. "It's hard for you to entertain other evidence that would contradict your thought process," Bennett says. You're convinced something's going on behind your back, and you can't see it any other way.

3. Your Suspicions Impact Your Day

If you change your plans, or alter your routine to accommodate these paranoid thoughts, take it as a sign. You might, for example, go a different route to the bathroom at work, all in the name of avoiding a certain coworker who is "out to get you." As Bennett tells me, this is a clear sign you're having too many paranoid thoughts. And that's not OK.

4. Other People Have Expressed Concern

It's not always possible for a paranoid person to realize they're paranoid, so do listen to your friends and family. As Bennett tells me, it's likely they've spotted your paranoid behaviors. So if they've been expressing concern or pointing out your extreme thoughts, take them seriously.

5. You've Started Trying To Protect Yourself

If your paranoid thoughts are getting out of hand, you might start taking certain measures to protect yourself and/or your identity. "If someone who is usually very comfortable in public starts withdrawing abruptly or feels the need to conceal their identity (with more or less make-up, hats, hoods, or glasses) and feels visually persecuted, like everyone is looking at them, there is a sign they may be having extreme paranoid thoughts," psychologist Dr. Michele Barton, of Psychology Life Well, tells Bustle.

6. There's No Evidence To Back Up Your Claims

Hey, sometimes people are horrible and there might actually be an issue at work, or with your friends or partner. But do remember to check the facts. As Barton tells me, you need to assess the likelihood of your concerns and look for evidence that supports your claims. If you (or a friend or therapist) can't find anything, that's a good indicator your thoughts are strictly paranoid.

Remember, a true personality disorder will affect your entire life, and will stick around for years — usually until you seek therapy. So no, you aren't paranoid if you'd like to stay home one night. You might be dealing with an issue, though, if your concerns are keeping you indoors 24/7. "If your paranoia is preventing you from engaging in personal, professional, or social activities it is a problem, and that's too much paranoia," Barton says.

8. The Thoughts Are Intrusive

We all worry, we all have anxiety, and we're all occasionally paranoid. But more often than not, it's possible to shut these thoughts down. It's only when you can't that you need to be concerned. As psychologist Dr. Joshua Klapow tells me, these "intrusive thoughts" might come into your stream of consciousness frequently — sometimes even hourly — and can't be stopped or settled down.

9. You're Always Looking People Up And Scouring The Web

While it's smart to do a little research before meeting up with a stranger, it is possible to go too far when doing a background check. So, if you can't seem to stay off of Google and you feel super suspicious all the the time, take note. "If you feel the need to check up on all your dates, new friends or people you encounter to make sure they don't have a shady past, this is a sign you may be more than untrustworthy," says NYC-based therapist Kimberly Hershenson, LMSW.

10. Things Have Been Tough At Work

Most people can maintain a healthy perspective when it comes to other people's emotions. But you always feel like people are out to get you, or purposefully attacking you. As Bennett tells me, you might be quick to counterattack when it seems like someone is lashing out. And, you might even have a hard time at work, since it's tough for you to take constructive criticism.

11. Your Suspicions Are Officially Stressing You Out

If you're having too many paranoid thoughts — instead of the usual ones we all have — it'll likely start stressing you out. "The thoughts cause feelings of anxiety, stress, worry that sticks with the person throughout the day," Klapow says. "Sometimes a person can have paranoid thoughts that have a lasting emotional impact. So they may not be actually having the thought but they have a feeling of 'free floating' stress and anxiety and they don't know why. This is the emotional impact of a paranoid thought that is too intense and too frequent."

Remember, these issues have to be ongoing and super impactful before you should consider them a personality disorder. It's normal to have a few paranoid thoughts, but they definitely shouldn't be overtaking your life.