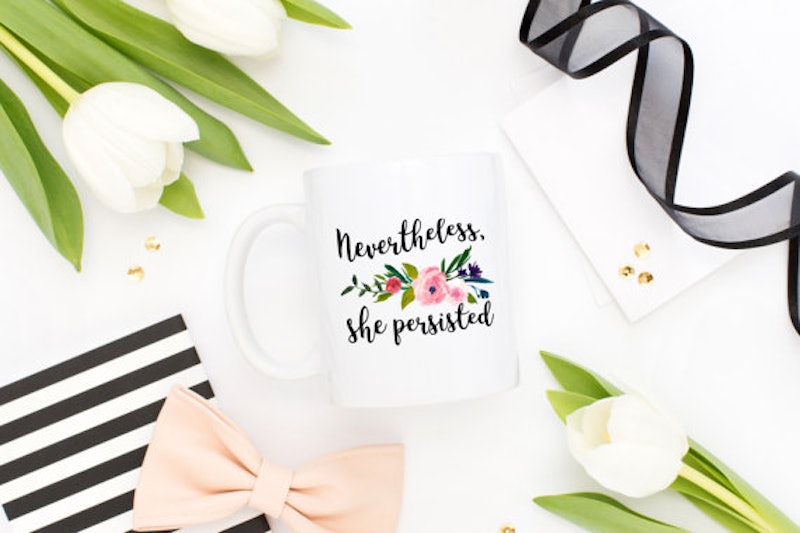 Tuesday night, Senate Majority Leader Mitch McConnell silenced Elizabeth Warren, the Democratic Senator from Massachusetts by evoking an old Senate rule that forbid Warren from speaking, and when describing the incident later, McConnell said, "She was warned. She was given an explanation. Nevertheless, she persisted." Warren was shut down after she spoke out against Trump's nominee for Attorney General, Jeff Sessions, who, as of Wednesday night, has officially been confirmed as the Attorney General of the United States.

Within no time, "nevertheless, she persisted" merchandise starting hitting Etsy's virtual shelves, because much like when Donald Trump referred to Hillary Clinton as a "nasty woman," women were quick to take ownership of something that was meant to be negative. "Nevertheless, she persisted" is the perfect rallying cry for women in the US (and the world) who feel belittled by the current administration. Because we won't give up. We will persist in this fight for equality.

"Nevertheless, she persisted" merch is the new "nasty woman" merch, and in record time, Etsy shop owners managed to create plenty of items with the quote, including t-shirts, tote bags, necklaces, pins — you name it. These producers are really on top of things, because I'm not even sure I heard this quote by the time many of them had already created a whole "nevertheless, she persisted" line.

Here are 11 "nevertheless, she persisted" items you can buy right now.

How did someone design this symbol so quickly? It's impressive.

You can never go wrong with a classic gray t-shirt.

I would drink coffee out of this every day.

You can carry this tote around every day and remind yourself that you can't and won't stop.

*Hangs this up in every room of my house*

Elizabeth Warren won't stop and neither should you.

A Brief History of Feminism: Nevertheless, She Persisted Tank Top, $16, Shirts From Shinola

Can you really have too many mugs? No.

Nevertheless She Persisted Baseball Tee, $17, Tees and Thank You Shop

Elizabeth Warren will not go down without a fight, and I admire that. This t-shirt is a perfect way to support the Massachusetts Senator.