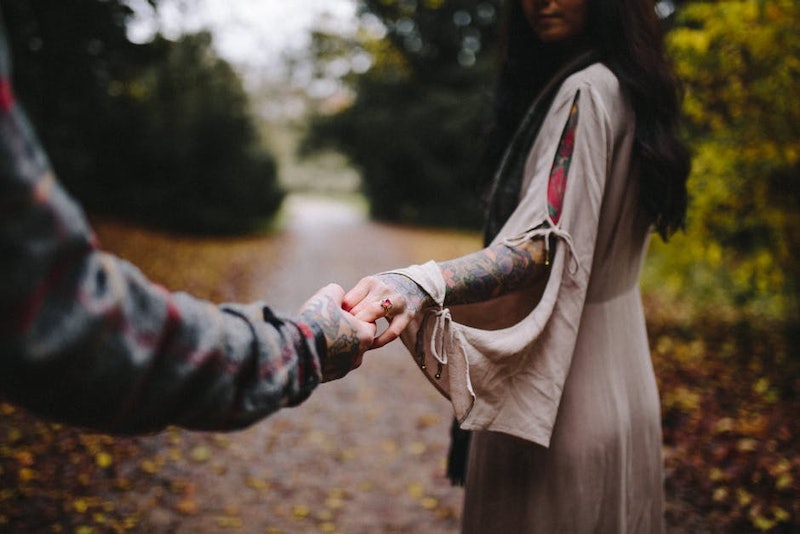 Has your partner ever given you a compliment or said something "helpful," but their advice kind of rubbed you the wrong way? If so, you could be dealing with a passive aggressive person, as well as a relationship that may need some reevaluating. On the other hand, it could be you have a totally well-intentioned yet not-so-socially gracious partner. And while not as hurtful, their comments can certainly drag your relationship down.

In either case, if your partner says something "nice" but it isn't actually so "nice," it's important to speak up. "The best response for these 'nice' comments is to say 'that isn't helpful' followed by 'what I need from you is...' and let your partner know exactly what you are looking for," NYC-based therapist Kimberly Hershenson, LMSW tells Bustle. This will shut down their passive aggressiveness, while also allowing room for change to take place.

It may be tough to speak up, but it's worth it for the sake of your self-esteem, as well as your relationship. "Ultimately, these not-so-nice 'nice' gestures, even if unintentional, can be very harmful to a relationship," says certified counselor Jonathan Bennett. "No one wants to be with another person who makes them feel bad all the time." Read on for some common comments that aren't actually kind, as well as what to do about them.

While they may be coming from a caring place, if your partner tells you "not to worry," it can feel downright dismissive. "A statement like this invalidates your partner's feelings and [makes them believe] they aren't entitled to be upset," Hershenson says. "In reality, someone cannot tell you what is an appropriate response to a situation because they are your feelings." If your partner constantly shuts you down, be sure to speak up and let them know this isn't actually a helpful response.

While they may simply be concerned about your health, any comments about exercise might be your partner crossing a line when it comes to your body. If that seems to be the case, Hershenson tells me it's totally normal to feel hurt, or even less motivated to care for your health. The best way to handle it is to them down and explain why this comment is hurtful, and then move on from there.

When trying to decide what to do on a Friday night, the last thing you want is that classic back and forth "whatever you want" battle — even if it is well intentioned. "If someone is asking for your opinion or insight, not giving one sends a signal that you don't care," Hershenon says. Let your partner know it's totally OK for them to offer an opinion, and that you'd really appreciate some decisiveness.

4. "This food is actually really good."

"This one is all about tone," psychologist Dr. Nikki Martinez tells Bustle. If your partner is complimenting you, but they sound totally surprised while doing so, it can sting a bit. Other examples include "the house actually looks pretty clean" and "you look really nice tonight." If they do this, it may be time to ask why they're being so passive aggressive.

Again, comments like these can feel a bit invalidating. "It's meant to help someone change their perspective on the issue that's bumming them out. And usually it's said from a loving place, out of kindness," says child and family therapist Shanna Donhauser. "But the underlying message can be toxic: your issue isn't that important; the thing that's bothering you is petty; get over it."

6. "That outfit doesn't look bad, even though you're so [fill in the blank]."

Be wary of backhanded compliments, too. "If your partner has to add qualifications to a compliment, then he or she isn’t really being all that nice," says Bennett. They may say you look really hot, "even though you're so short" or that they like you're dress, "even though you've put on weight." And that's not cool.

7. "You should consider changing XYZ about yourself..."

If your partner doles out unsolicited advice, it may be disguised as helpful, but it's likely not. "Giving advice is generally considered a nice gesture. But, lots of people use 'advice' as a passive-aggressive way to shame others into changing behavior," Bennett says. It's important that your SO know how this "help" makes you feel, so let 'em know.

Of course this can be said with love, but it's also a comment that should send little alarm bells off in your head. As relationship consultant Dr. Rhoberta Shaler tells me, sometimes people say this to a partner they believe is malleable, overly accommodating, and way too willing to please. "It's not nice or kind because of the malicious intent behind it, and the power play that it is." For that reasons, it should definitely spark a conversation.

This may sound like the sweetest comment ever. And it is, in a way. But beware a partner who is letting themselves get too comfy. "This may sound like your SO is oh so comfortable around you and you may think this is nice, but a SO that continues to try to be their best self for you is really the one that you should keep around," says relationship therapist Julienne B. Derichs, LCPC. In other words, even if you two have been together forever, it's still important to make an effort.

Here's yet another qualifying statement that'll instantly undo anything kind that was said. "We want to feel like our SO is someone we can turn to to share the 'heavy lifting' in life," Derichs says. "This sends a message that actually 'I'm not here for you. You are on you own.' Not so nice."

If your partner says they know everything about you, consider it a red flag. "It's not great when your SO is no longer curious about what is really on your mind and thinks they can anticipate where you are going in the conversation," Derichs says. "We all want to be seen. It's not so nice that you become so familiar to your SO that you become invisible. "

It's important not to jump to any conclusions with these. If your partner says they are comfortable around you, for example, it's doesn't automatically mean they're being unkind. But do keep in mind all the comments that sound "nice" and actually aren't. They may be a sign of a problem, as well as a reason to have a heart-to-heart ASAP.