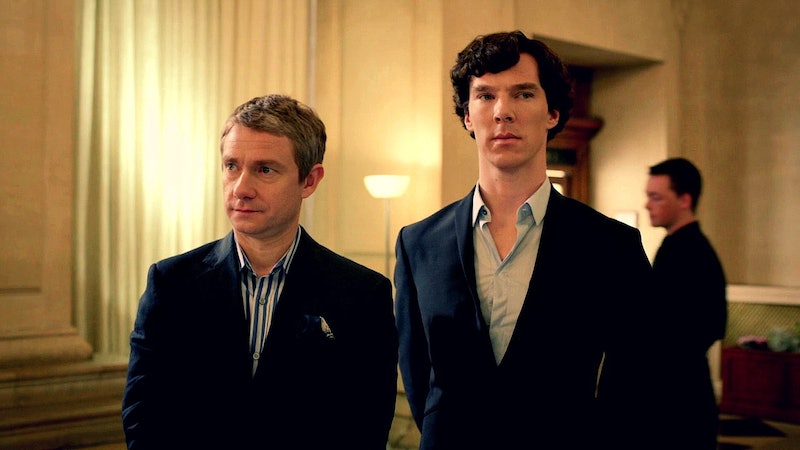 After literal years of waiting, Sherlock Season 4 has come and gone, and fans have been left with no answer about if or when there will be more. At the moment, no decision has been made on whether or not there will be a Season 5. Luckily if there is, Season 4 ended with plenty of room for the show to continue — none of the main characters died, Sherlock isn't in hiding, and the question of Moriarty is no longer lingering over Sherlock and Watson's lives. The Season 4 finale set up plenty of potential plots for Sherlock Season 5, from the romantic to the mysterious, without resorting to another cliffhanger.

With Watson and Sherlock back to business as usual at 221B Baker Street, Season 5 could act as a natural reboot point for the series. By drawing on its twisty, evil sister-fueled finale, the show has the opportunity to go back to its roots in a big way by finding cases and emotional beats close to the (consulting) detectives' hearts. There were some dark twists in "The Final Problem" that deserve to be explored more thoroughly, and they would require the show to focus in on its two dynamic leads, while leaving the more melodramatic touches behind.

If Season 5 does happen — and, yes, it does need to happen — here are 11 plots inspired by the Season 4 finale, just waiting to be untangled by Sherlock and Watson's skills of deduction.

Presumably, Eurus isn't Sherrinford's only inmate. The asylum may very well hold the show's next great villain, one who was inspired by Eurus herself.

2. A Taste Of Redemption For Eurus

Sherlock and Eurus' violin duet should lead to the siblings teaming up to solve a seemingly unsolvable case together. Given her penchant for killing without remorse, Euros can never be fully redeemed or trusted, but that only makes the prospect of Sherlock being forced to work with her all the more interesting.

Sherlock's childhood friend was murdered by Eurus, and the episode failed to reveal what little Victor's family had to say about the matter. Did they even know the true fate of their son? Seeing Victor's family return to the Holmes' family's lives is a must.

That "I love you" cannot go unaddressed forever. It's about time Molly and Sherlock figure out what exactly it is that exists between them.

5. Does Eurus Have An Accomplice?

The finale intimated that Eurus' powers of persuasion are so advanced she can convince anyone to do her bidding, including all of the guards at Sherrinford. Were they really so easily manipulated they strung up three brothers from a bridge, though? It would make far more sense for Eurus to have a willing accomplice to assist in pulling off her grisliest crimes.

Mycroft was a standout in "The Final Problem," proving once and for all he is an indispensable character. The episode revealed Mycroft was recruited by the government as a young man, and there is so much more to explore there. Might I suggest a Mycroft-centric outing?

It's all well and good to show John and Sherlock solving cases and playing with baby Rosie, but the truth is John is now a single parent. The show would do well to explore how John copes with balancing single parenthood with his dangerous line of work.

8. How Many Secrets Does Mycroft Hold?

Mycroft is the keeper of the Holmes' family's secrets and minder of his siblings' mental health. He kept Eurus' existence from Sherlock, which makes it easy to suspect there's even more he is avoiding telling his brother about their shared past.

Just like with Victor, the death of three brothers surely would have some repercussions. Given Sherlock's fame, the Garridebs' family could blame the detective and his troubled family for the death of their three sons. It would be interesting to see Sherlock faced with a down tick in his popularity as a result of Eurus' deadly games, if for no other reason than it would force John and Sherlock to take less flashy cases again.

10. The Return Of The Woman

OK, so Irene didn't play a role in the finale, but her memory was at the forefront of the season. The revelation that Sherlock has been stamping down his emotions as the result of not knowing how to deal with his past trauma is a natural way to lead him back to The Woman, Irene, the one he just can't seem to let go of.

11. Why Is Mycroft Afraid Of Clowns?

Come on, there has to be a story there.

If a Season 5 is commissioned, the wait will no doubt be long, but with so many stories yet to be told, the game really should still be on for the Baker Street Boys.

More like this
‘Squid Game’ Creator Hwang Dong-Hyuk Just Dropped A Major Season 2 Tease
By Brian Anthony Hernandez and Bustle Editors
Everything To Know About 'Westworld' Season 5
By Sophia Moore
Everything To Know About 'Evil' Season 4
By Meguire Hennes
'Stranger Things' Season 5 Will Echo Season 1 In A Key Way, The Duffer Brothers Confirm
By Kadin Burnett and Sophie McEvoy
Get Even More From Bustle — Sign Up For The Newsletter