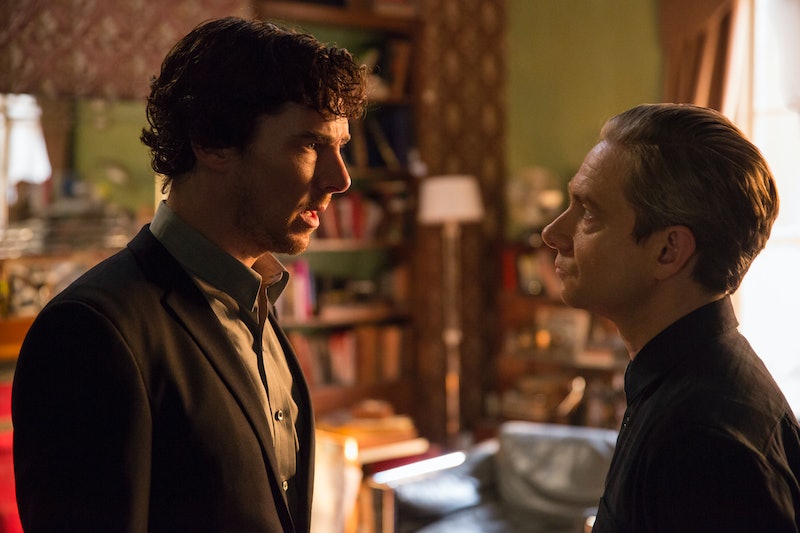 After three years without a full season of Sherlock, it's felt positively decadent to have a new episode every Sunday night. But as every Sherlock fan intimately knows, these seasons are short and sweet. The Sherlock Season 4 finale airs on Jan. 15 before its audience is plunged back into that cruel holding pattern: hiatus. The showrunners and stars have yet to explicitly commit to a Season 5 of the international hit, but it's not off the table either. And since I live in hope that the game will be on for ever, I'm going with the assumption that Season 5 of Sherlock will happen sooner or later. (Later, definitely.) But what will it look like? These Sherlock Season 5 spoilers are clues worth investigating.

Season 4 has been a dark one, even by Sherlock standards. The death of Mary Watson and Sherlock's culpability have changed everything for him and his trusty best friend. The days of James Moriarty torturing his detective nemesis by turning the entire city against him and then blackmailing him into faking his own suicide look downright relaxing in hindsight. If Sherlock does continue as its devoted fandom hopes, perhaps the traditionally long break will allow these characters to overcome some of that anger or at least master it.

There isn't much to go on yet, but here are a few deductions I can make about Sherlock Season 5.

It Won't Happen Next Year

It's less of a disappointment when you know to expect it, right? Due to the busy schedules of its leads Benedict Cumberbatch and Martin Freeman and showrunners Steven Moffat and Mark Gatiss, Sherlock will never be on a regular series production schedule. Moffat told Radio Times, "Sherlock can only ever be a passion project. So give us a moment and Mark and I will go back to [Arthur Conan] Doyle and see what we’ve missed." Considering the breadth of the Sherlock canon, I'd say there's plenty of material still left to adapt.

But according to Moffat, this upcoming season finale will include some revelations that will contribute to the show's erratic timeline. He explained to the AP (via Metro UK) that "you’ll have to see the fourth season to realize why, for now, it’s not going to happen again at the same regularity that it has been happening." Hm.

There'll Never Be A Sherlock Without Sherlock And John

"Anything can happen to anyone," Moffat told Entertainment Weekly after Mary's death. Sherlock's London is quite dangerous, as past seasons have proven. But the co-showrunner clarified that the show would never kill off its core crime-fighting duo and pass the reins over to some new characters. "I think it’s safe to say we couldn’t do Sherlock Holmes and Dr. Watson without Holmes and Watson," he said.

The Showrunners Aren't Handing It Over

Moffat is due to pass off his other series Doctor Who to new showrunner Chris Chibnall after Season 10. But he and Gatiss have no plans for letting go of this particular toy. Sherlock Season 5 won't happen without its creators. "We've got the keys to Baker Street for a bit and other people will get them, as it should be," Gatiss told Digital Spy. "Of course, loads of other people will do Sherlock Holmes and we'll be the first people to watch those," Moffat added. "But our version is our version."

Back in 2014, Moffat told the audience at a screening of the Season 3 finale that he and Gatiss had met to sketch out not just Season 4 but also the arc of Season 5. Whether they stuck with those plans or went completely back to the drawing board is unclear. But somewhere in the world, there is an outline for a fifth season of Sherlock. According to The Independent, Moffat said, "The ideas we had that day, I thought were the best we’ve ever had.” Bring it on then, gentlemen.

The bright side of the Sherlock hiatus is that you'll have plenty of time to watch and rewatch the existing episodes to see what you might have missed. Because there are no coincidences in this show, and this hypothetical Season 5 will build on everything that's come before.