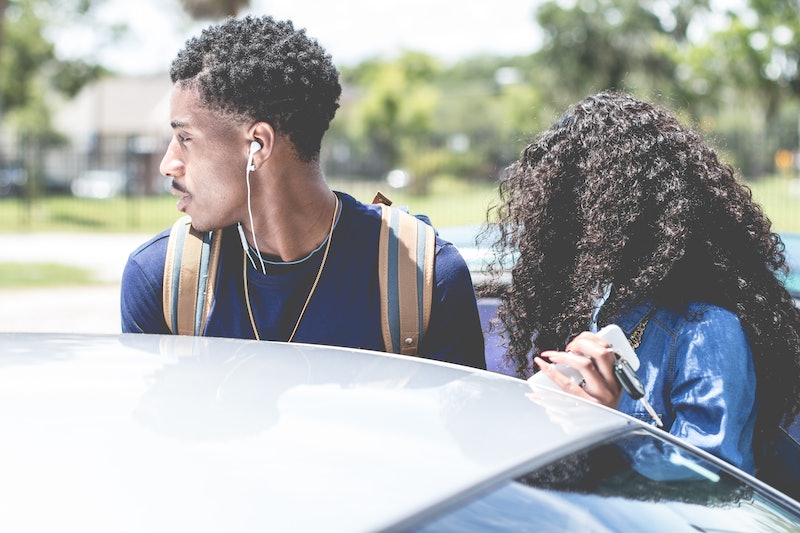 If your relationship is going through a rough patch, you're probably spending a decent amount of time wondering if things are going to be OK. Maybe you aren't spending as much time with your partner and it's freaking you out, or you've been arguing a bit more and it feels so strange. Whatever the case may be, if you're worried about the future of your relationship, life can certainly feel all sorts of stressful.

So, here's a little action plan. First, decide if the relationship is something you'd like to stick around for. "Until you can come to an answer to this question, you can't move forward in any manner," clinical psychologist Joshua Klapow, PhD tells Bustle. It's important to remember this situation is definitely a two way street.

Once it's clear that you'd both like to work on things, talk with your partner about all the worrying signs you've been seeing. "Let them know that you are concerned about the relationship and that you want it to work," Klapow says. And then put in the effort necessary to keep things moving forward. If your relationship is meant to last, you'll likely get through this rocky period. But if not, you might notice some of the issues below, which are all signs your relationship is actually in trouble.

1. Your Partner Has Announced They "Need A Break"

While it's definitely smart to spend time apart and have a life outside the relationship, it's not a great sign if your partner suddenly wants a full on break. "For most, it is probably leading to a breakup," relationship expert Stef Safran tells Bustle. Occasionally, space will allow a couple room to breathe before getting back together. But more often than not, a break is simply an easier (and kind of cheap and more painful) way to split up.

2. You Two Have Stopped Talking About The Future

Another sign your relationship is in trouble? If you (or your partner) stops making plans for the future. "If you used to go out every weekend and make plans for trips and the future [and now you don't], this might mean that they are unsure about the relationship," Safran says. It's not a death sentence, but it may mean you both need to sit down for a chat.

3. They Have Begun To Cancel Plans

An increase in cancelled plans is another subtle sign of a problem. So yes, it may be worth worrying if your partner tells you they need more space, or that they don't feel like hanging out. "If you were together 24/7, maybe there is reason to slow it down, but this type of comment requires a longer conversation," Safran says.

Sex can fizzle a bit as the relationship goes on. But that doesn't mean you should ignore or accept a total lack of intimacy. "If your partner no longer wants to be intimate with you, this may signal infidelity, or there could be something medical going on that they do not want to talk about," spiritual counselor and psychic Davida Rappaport tells Bustle. Whatever the case may be, a lack of sex should spark a conversation.

5. Your Arguments Have Been Getting Worse

It's totally normal to have arguments, as long as you both work them out in a healthy way. That said, pay attention to fights that seem to go on and on, as well as ones that involve name-calling or blaming. Klapow tells me a shift to a less-than-helpful arguing style could be a sign of a true problem, and possibly even one you guys won't be able to come back from.

You're going to experience ups and downs as a couple, but at the relationship's core, it should still feel like you're on the same team. That's why, if things are truly going south, it might feel like you're in a constant competition to "win." As Klapow says, "Whether that is an argument, an idea to do something together, a sport — you go from being on the same team to wanting them to lose."

7. The Respect Is Gone

Since respect is a pillar of a healthy relationship, you have every right to worry if it it seems to have vanished. "Couples that stop respecting one another should be concerned about the state of their relationship," marriage and family therapist Shadeen Francis tells Bustle. "Common signs are name-calling, humiliating in public, ignoring, or doing things that cross the relationship boundaries that the two of you have agreed on, like sexting with others." If any of that sounds familiar, it may be time to call the whole thing quits.

8. Your Partner Is Unwilling To Compromise

Your partner needs to be willing to compromise, if this thing is gonna work. So take note if they can't seem to meet you half way. "If your partner starts wanting everything their way, it is a red flag," says NYC-based therapist Kimberly Heshenson, LMSW. "For instance, if family is important to you but your partner starts refusing to go to family events this is a problem."

Take note if your partner is suddenly all about making plans — just not any that involve you. "Whether it's short term plans or plans for the future, if your partner intentionally (or even subconsciously) does not want you participating in their plans, it is a sign your relationship is in trouble," Hershenson says.

10. You Find Yourself Making Other Plans

Remember what I said about this being a two way street? While you may be bummed out by the rift in your relationship, be sure to pay attention to what you're doing to push your partner away, too. If the relationship isn't working out, Kaplow tells me you may catch yourself making plans to stay out of your partner's way, or avoiding being around them for extended periods of time.

11. They Seem To Be Resentful During Your Time Together

If you go on a date with your partner, and they seem to resent being there, don't take it lightly. "Some folks ... start feeling annoyed or resentful when they spend time with their partner," Francis says. "This is a major clue that things are changing in your relationship. Without finding ways to reconnect, partners might find themselves with little in common and without motivation to work things out."

If anything of this rings true, it doesn't mean your relationship is doomed. It does, however, mean that you'll both need to make an effort to bring things back from the brink — should that be what you decide to do.

More like this
20 Things You Should Never Tolerate In A Relationship
By Rachel Sanoff and Kathleen Ferraro
The Best Time To Date After A Breakup, According To Experts
By Bustle Editors
12 Ways You're Sabotaging Your Love Life
By Teresa Newsome and Lexi Inks
Your Daily Horoscope For August 18, 2022
By Alexandria Lettman
Get Even More From Bustle — Sign Up For The Newsletter