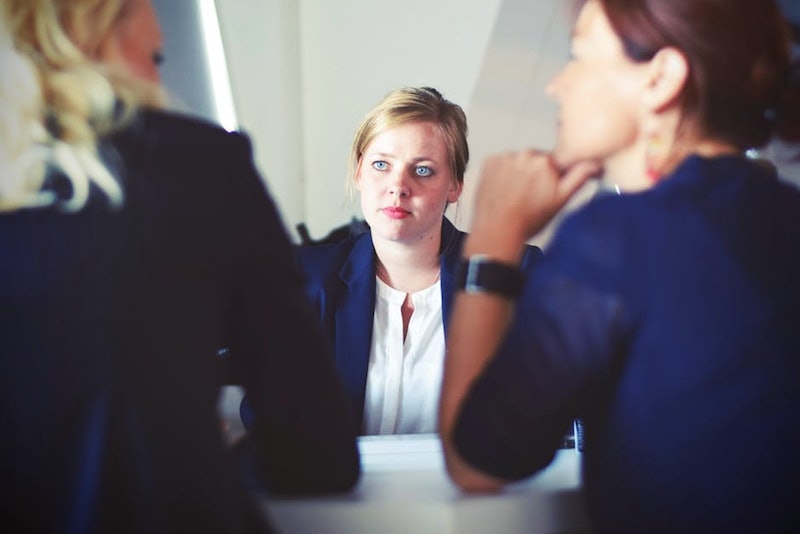 If you lucked out and found a boss who's supportive and caring, count yourself lucky. Some bosses and managers are cool like that, and want you to come to them with your problems, questions, and concerns. That said, not every work environment is as open as this. If you're in a more traditional office, for instance, there are some things you should never say to your boss, as the info can sometimes (unfortunately) be used against you.

"As much as we want the workplace to feel open and comfortable, sharing too much information is not always a good thing," clinical psychologist and The Web Radio Show host Dr. Joshua Klapow tells Bustle. "This is not about being secretive, as much as it is being prudent with your information. Your boss, like other people in your life, does not need to know every situation, every challenge, and every transition you are undergoing."

It is important to keep in mind, though, that you should always go with your gut. If something's been bothering you or affecting you at work — like a mental health issue — sharing that with your boss could start an important and productive conversation.

So, what's OK to share? And what should you keep to yourself? The choice is definitely up to you. But when it comes to the topics below, a few of them should make you think twice, all in the name of doing what's best for you at work.

1. The Stressful Things Happening Outside Of Work

Personal challenges, like issues going on in your family, can be tough to leave at home. But it's often best to separate your work life from your home life. "Unless you feel this is bleeding over to your work, to your ability to do your job, then your boss really doesn’t need to know the intimate details of your life," says Klapow. "We all have them (including your boss) and that is a social line that you don’t want to cross. You don’t know how it will be interpreted."

If you're going through a difficult breakup, putting on a good face at work can feel impossible. And yet, you should try to remain as professional as possible. "While there might be some compassionate jobs, too often I have heard of women who were adversely impacted for sharing something like this," psychologist Dr. Nikki Martinez tells Bustle. "Showing our vulnerabilities, unfortunately, gives [companies] ammunition and often changes their perception of us." So tell a friend, tell a therapist, tell your mom — but don't tell your boss.

3. What You Really Think About Your Coworkers

Unless you're asked directly (and sometimes even then) it's smart to keep your opinions about your coworkers to yourself — even if everyone else is sharing what they think. "Stick to the facts when it comes to talking to your boss," says Klapow. "You may not personally like a co-worker, [but] your boss does not need that from you." Sharing secrets or opinions can make you seem immature or rude, and that's definitely not a good look at work.

4. If You're Looking For A New Job

If you're currently searching for a new job, you might feel the need to inform your boss, as well as all your coworkers. But do resist. "While honesty is a virtue ... you never know if or when you will find something, so keep this information to yourself," says Martinez. "Share the information when you have been formally offered a position that you would like to accept. Otherwise, you may find yourself in a very unfortunate position." Like, with an angry or wary boss who'd rather fire you than wait around for you to quit.

5. If You're Moving Over To A Competing Company

Once you're officially moving on, it's obviously OK to share the news. But you might not want to wax poetic about it too much, especially if you're moving to a competing company. "Bosses can be extremely sympathetic to you having a change of heart with your current industry or wanting to branch off on your own, but leaving their company for a rival's tends to seem personal," says author and life coach Kali Rogers. "Really tread lightly here and think about all of the possible outcomes." And try to leave on a good note.

People are pretty conflicted when it comes to talking about mental health at work. On the one hand, it's incredibly personal, and — because we live in an imperfect world — the news can be held against you. But, on the other hand, some people think it's important to share so that everyone remains on the same page. In this situation, evaluate your work environment, and the impact your illness is having on your career, before speaking up. You might also want to chat with a therapist to try to figure out the best course of action for you.

Some people think this is a huge no, since it can change peoples' opinions of you. And yet, deciding to talk about an illness at work is totally up to you. Just make sure you cover all your bases, especially if your illness has been holding you back. "When you are sharing something about your life that affects your work productivity, put it in writing," Rogers says. "That way it's documented and if anyone tries to come back and say you were 'just slacking off' — there's a paper trail that says otherwise. We always have to have our own backs!"

8. Whether Or Not Something Was "Your Fault"

Sometimes, when sh*t goes down at work, you just gotta shoulder the blame, especially if it means maintaining your professional persona. So resist the urge to tell your boss something wasn't "your fault." As career coach Anna Frances Wood says, "Even if it's true, absolving yourself of responsibility (or worse, passing blame), is never a good look. Instead, propose a fix and take action. Your boss may not even remember whose 'fault' something was, but she'll remember the person that found solutions."

9. Anything Extremely Personal In Nature

Whether it's your crazy party-packed weekend, weird personal habits, or some unsavory opinions, think twice before sharing these things with your boss. "Anything that is extremely personal in nature (either about yourself or your boss) ... should absolutely be kept out of conversations," says certified career coach Scott Robson. "Keeping things 'clean' will help to avoid problematic situations where lines have been crossed, and getting them back to a professional place becomes almost impossible."

10. Whether Or Not You Feel Overwhelmed

If you're in a stressful situation, it's totally normal to feel a bit panicked or upset. And if it's really bad, you should tell your boss or delegate your work. But if you're just having a bad day, give yourself time to cool off before saying anything. "If you're having trouble coping with anxiety during the day, it's better to take a breather and step outside or take a few moments to meditate than it is to have a breakdown in front of your boss," says NYC-based therapist Kimberly Hershenson, LMSW. While it's OK to have emotions, usually a quick break can do the trick, and get you back to impressing your boss.

Your boss likely knows how much money you make, but that doesn't mean it's OK to openly talk finances at work — good, bad, or otherwise. If it becomes known that you or your partner is pretty financially stable, for example, the news "can drastically reduce the likelihood that you'll get a raise in the future, simply because your boss might think that you don't need the additional money," says Peter Yang, co-founder of ResumeGo.

All of that said, you should always weigh the pros and cons and do what's right for you. And keep in mind that some things should always be shared with your boss, like sexual harassment at work. That's something he or she needs to know about, ASAP, so that something can be done.

More like this
Black Women's Equal Pay Day Highlights An Upsetting Problem
By Brandi Neal
10 Ways To Be More Empathetic To Your Partner
By Raven Ishak and Lexi Inks
Think Your Partner Is Cheating? These Tarot Cards May Confirm Your Suspicions
By Kristine Fellizar
The 19 Best Tweets & Memes About Bisexual Awareness Week
By Lexi Inks
Get Even More From Bustle — Sign Up For The Newsletter