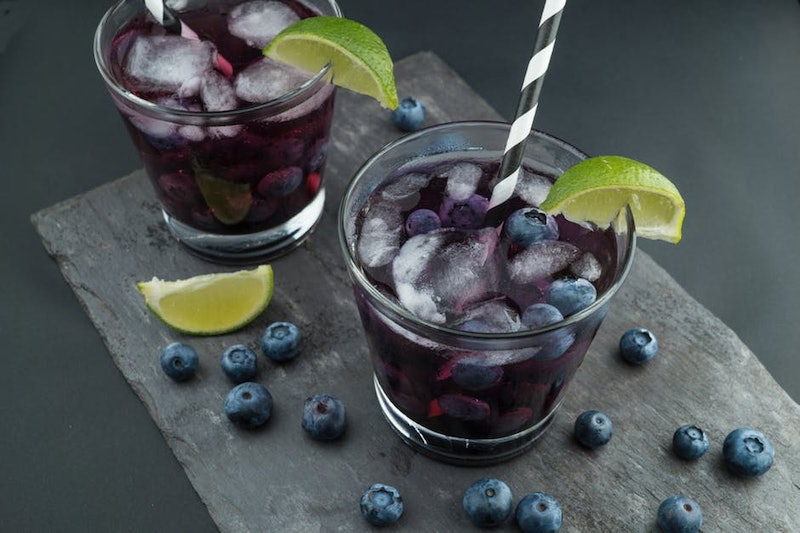 When faced with all the options at the bar — or in your own personal collection of liquors and wines — it never hurts to know which types of alcohol are healthier for you. It may not always be your top priority when drinking (and that's OK). But sometimes it's nice to go with a sugar-free, gluten-free, or antioxidant-rich option whilst imbibing on a Saturday night.

If you're trying to limit the amount of sugar in your life, for example, there are definitely some liquors that are better options than others. Same thing is true if you want or need to be gluten-free, have a family history of illnesses to consider, or simply want to stay feelin' great all night long.

"For anyone choosing to consume alcohol, finding some types of alcohol with particular health benefits is a way to minimize or offset some of the negative aspects of alcohol consumption," health expert Christopher J. Carrubba, MD, MBA tells Bustle. "Choosing an alcohol that might improve metabolism or help with cholesterol can mitigate those other, more unwanted effects." Sounds good, right? Then read on for the surprising health benefits of different types of alcohol, so you'll know exactly what to put in your next drink.

If you're on the hunt for a low sugar option, vodka is going to be your new best friend. (If it isn't already.) As health expert KJ Landis says, "Vodka is clear and clean in flavor with low sugar content. She suggests mixing yours with olive juice for a savory sugar-free drink. Or, you could always combine it with club soda and some fresh fruit. So good.

Vodka wins again if you need to go gluten-free. "Vodka is distilled many times over," Landis says. "Even if it doesn't say gluten-free on the label, the distillation process makes most vodkas gluten-free — even the ones that began as a grain-based alcohol." Good to know, right?

By now you've probably heard all the benefits of red wine, so keep 'em in mind the next time you're choosing a drink for the evening. As health expert and co-founder of Tone It Up Katrina Scott tells me, wine contains an incredible amount of heart-healthy antioxidants. So pour a glass and drink up.

If you're looking to speed up your metabolism, ask for tequila. As Carrubba says, "... some studies have shown that a shot before dinner can increase metabolism and help cause early satiety, thus decreasing caloric consumption." It may come in handy when gearing up for Taco Tuesday.

Need another reason to take a shot of tequila? As Carrubba tells me, it has been demonstrated that it can decrease the development of osteoporosis due to the presence of agave fructans, which may aid in the absorption of calcium. Of course you need to eat well and exercise for bone health, but a shot or two of tequila certainly won't hurt.

Champagne is made from grapes, which are chock full of chemicals known as polyphenols. That's why some studies, as top cardiac surgeon Dr. Steven Gundrey points out, show it can ​improve your memory. Another reason to have mimosas at brunch? I think so.

Red wine again, FTW. As Carrubba says, "Consuming an average of one to three glasses of red wine per day has been associated with a reduced risk of dementia and Alzheimer's disease." This is thanks the compound Resveratrol, which may help reduce the plaques found in the brains of patients with Alzheimer's disease.

OK, one more reason to be pro wine: it may help reduce the risk of several types of cancer. As Carrubba tells me, it may help ward off colon, basal cell cancer, ovarian, and prostate cancers.

Hate artificial flavors? Me too, which is why I love the idea of hard seltzers. As Kylie Barnett, a Wine & Spirits Specialist at Raising the Bar Communications tells me, many don't use artificial flavors or ingredients. Hard seltzers also have lower alcohol levels, which means you can easily drink in moderation. Win win.

Have you heard of Amaro? It's a popular Italian liquor with origins in 19th century monasteries, Amaro spokesperson Patrick Rizzuto tells me. It was originally made for medicinal reasons and to aid in digestion — and many people still use it today as a digéstif. "Like many bitter liquors and Amari, it’s a natural kickstart to get an individual’s gastric juice and saliva to settle an appetite and aid in digestion," he says. Sounds helpful to me.

If you have a sensitivity to tannins or sulfites (often found in wine), then sake should be your new go-to drink. As TYKU Sake senior brand manager Adrian Molina says, "Rice, water, koji, and yeast are used to produce a gluten-free TYKU sake with no sulfites, tannins additives, or preservatives." Good to know if you're tired of having allergic reactions.

So, there you have it. Keep in mind, however, that you shouldn't drink any of these alcohols in excess or rely on them to improve your health. This list is merely meant to provide you with some info about healthier alcohol options. Cheers!