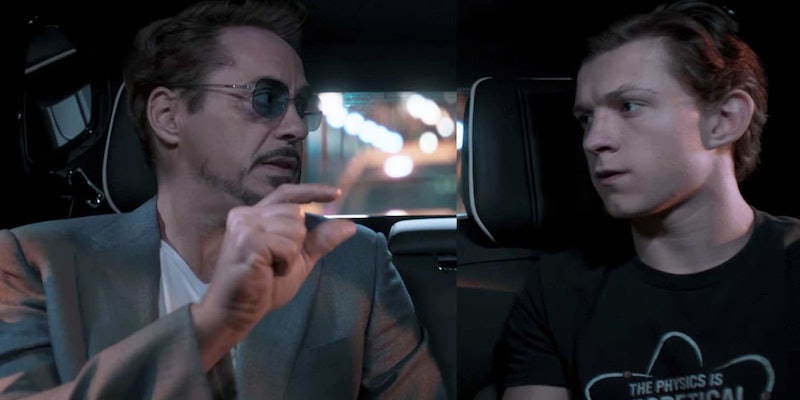 It's a new year, which can only mean one thing: It's time for a new crop of Marvel movies. After 2016 dazzled with the year's highest-grossing film at the worldwide box office, Captain America: Civil War, and one of the most thrilling character introductions ever, Doctor Strange, 2017 promises to be even better with three new MCU films: Guardians of the Galaxy: Volume 2, Thor: Ragnarok, and perhaps the most exciting, Spider-Man: Homecoming. That film will showcase a new Spider-Man, who's basically a young Tony Stark.

Now, I obviously don't mean that the new Peter Parker is actually a younger version of Tony Stark (remember, young Tony Stark appeared in Civil War thanks to some movie magic — and he didn't look like Spider-Man star Tom Holland), I just mean the two heroes share some obvious similarities. I think it's safe to say that Stark would agree, given how he took Parker under his wing in Civil War. And since Stark will soon be seen further mentoring the high schooler in Spider-Man: Homecoming, it would make sense for Marvel's two most marquee names to be two peas in a pod. So here are all the reasons why the new Peter Parker is basically Tony Stark Jr.

Just like his mentor, Parker has a scientific mind and sometimes has a tough time relating to others given his superior intellect.

2. He Invents His Own Weaponry

Although he doesn't fully rely on technology for his powers like Stark does, Parker still uses his inventions to augment his abilities. Case in point, his web-shooters, which he created himself.

Maybe this goes back to the intellect thing, but Parker and Stark are probably the two biggest wiseasses in the Marvel Cinematic Universe. Well, OK, maybe Star Lord is on their level, too.

4. He Has A Strong Desire To Do What's Right

Although he, like Stark, can sometimes seem abrasive, Parker's moral compass never wavers.

A Queens native, Parker can relate to midtown-resident Stark when it comes to subjects like the subway and Halal carts.

Superheroes can wear whatever colors they want, so it must mean something that both Parker and Stark choose red as the color with which they go into battle.

7. He Has A Problem With Authority

In the trailer for Homecoming, Stark flatly tells Parker that his time to be a superhero has not yet come — advice that Parker quickly ignores. A chip off the ol' anti-establishment Stark block, if you ask me.

He may not be Stark-level full of himself yet, but give him time — he's only 15.

9. He Lives In The Shadow Of A Father Figure

The death of Uncle Ben tortures and drives Spider-Man, just as Tony Stark is haunted by the accomplishments and death of his father, Howard Stark.

10. He's Struggling To Balance His Life With His Heroism

Stark's days as Iron Man have interfered with his business and his personal life, just as Parker's gig as Spidey threatens to harm his school work and his love life.

11. He's The New Face Of The Franchise

When Iron Man kicked off the MCU in 2008, Robert Downey Jr.'s titular character became the face of the franchise, and he remains that to this day. But Downey is 51, and he's not going to be Iron Man forever, which means Marvel will be looking to someone new to carry the torch. And who better than the latest incarnation of the brand's most iconic hero, Spider-Man?

Although he's not an Iron Man clone, the new Spider-Man could definitely be a young Tony Stark in an alternate universe — which seems like good news for Marvel Studios.