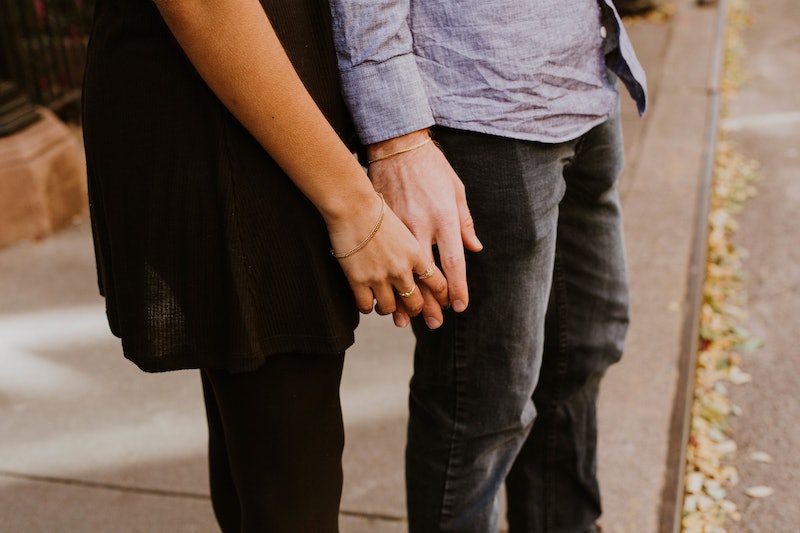 Sometimes it can be tough to tell the difference between the comfy (kind of boring) stage of a relationship and the signs that you're not really satisfied. They have many of the same traits in common, such as less chatty dinners, less sex, and more time spent in separate rooms on your phones. (Not cool, btw.)

So how can you tell? How do you know if you just need to spice things up, or if you should consider reevaluating your relationship? Well, first of all, good on you for recognizing that there might be a problem. As psychologist Dr. Nikki Martinez says, "It is essential that you catch these signs early and address them. Too many people just sit back, don't say a word, and watch things get worse and worse."

Besides, if you feel like there's a problem, there probably is. It's always possible to work things out though — especially if you speak up before things get out of hand. "If both people think this is a relationship worth working on and worth saving, doing so is always possible," Martinez says. Of course, it's always OK to bow out if you feel like that's what you'd rather do. Read on for some signs you might not be satisfied in your relationship, and hopefully you'll be able to figure out what you truly want.

1. You Live With Your SO But Spend Most Of Your Time Apart

Sure, you two are squeezed into a tiny one bedroom apartment. But when was the last time you were even in the same room? If it's been a while since you ate breakfast with your SO or watched TV at the same time, something might be up. As Martinez says, "These are things that you used to do together and, no matter how small, kept you physically with one another and created a connection. The growing distance may show the same thing is happening emotionally in your relationship." Not good.

2. You Constantly Make Plans That Don't Involve Your Partner

When met with a free night or an open weekend, your mind immediately jumps to what you can do alone or with your friends — never what you could do with your partner. As professional matchmaker Samantha Daniels, founder of the The Dating Lounge Dating App, says, "... if you constantly leave your significant other out of your free time activities, then you need to ask yourself why you are doing so." Is it because you prefer other people's company to your partner's? If so, it could be a sign that you're less than satisfied in your relationship.

Affection is one of the many signs of a healthy relationship, so it's never good if you suddenly don't want to kiss or cuddle your SO. In fact, as Martinez tells me, any kind of major shift in this area could be a strong indicator that something has changed for you emotionally.

4. You Sit In Utter Silence During Dinner

If you guys can hang out without having to talk, that's a sign of a healthy, secure relationship. (And it's so nice sometimes, right?) But take note if there's stone cold silence every night during dinner. As lifestyle writer Amy Shearn said on Oprah.com, "... the 12th time [this happens] you might experience a chill so subtle you blame it on the temperature in the room." Not only is this awkward AF, but it's also often a sign one or both of you is checking out.

5. You Always Forget To Ask About Your Partner's Day

In a similar vein, don't ignore your habit of ignoring your partner when you both get home at night. If it almost always "slips your mind" to ask about their day, Daniels tells me this could be a sign that you're less invested in your relationship than you might have thought. Of course, it may have just slipped your mind, so take some time to evaluate why you always forget to ask.

6. You're Constantly Ogling Other People On The Street

While it's totally normal to think other people are attractive, take note if you're constantly ogling every cutie who walks by or thinking "what if" every time that hot bartender looks your way. It might mean it's time to reevaluate your feelings towards your partner, or at least why you're looking for some extra attention.

7. You Can't Stop Peeking At Your Phone

I'm addicted to my phone just as much as the next gal, but still try to stuff it in my pocket when out to dinner with my partner. Not only is this the polite thing to do, but it shows I'd rather talk to him than stare at a cat photo on my phone. Take note, however, if you'd rather see the cat photo. "If you find yourself scrolling through Instagram ... then it is time to reevaluate your relationship," Daniels says.

8. You Don't Listen To Each Other During Arguments

Another thing to look out for? Your tendency to brush your partner off during arguments. While it may be tempting to sweep that ongoing tiff under the rug, a healthy relationship means listening to each other rather than just focusing on how repetitive the argument is, according to Shearn. If you can't be bothered, things may be nearing an end.

It may sound like a dream: a relationship that exists sans arguments. And yet, the occasional disagreement is actually considered healthy. So take note if you've entirely lost your will to bicker. As relationship writers Hannah Hickock and Mallory Schlossberg said in Redbook, it could be a sign that "... you've maxed out your ability to keep fighting for your relationship." Or that you no longer care. Either way, it's not good.

10. Your Partner Goes Out Without You And You Don't Really Care

When someone starts checking out of their relationship, they may fill their schedule with outside activities. You know, so they don't have to be home with their SO. As Martinez tells me, you might be the one making plans. Or, you might be the partner stuck at home. Take note either way — especially if you find yourself not caring what your SO is up to.

11. You're Always Fixated On Someone Else

Do you have a "friend" who gets all your attention while your SO sits idly by? You know, that one person you call instead of talking to your partner? If so, it could be a sign of a problem. As Shearn said, "... it could suggest that something is lacking from your relationship that [you're] looking for somewhere else." And that, my friend, ain't good.

There's no denying relationships are tough, but sometimes problems can get a bit out of hand — and point to greater issues. If you address them sooner, rather than later, it'll be easier to work through them. So if you're feeling checked out, make it a point to talk with your partner ASAP.

More like this
10 Ways To Be More Empathetic To Your Partner
By Raven Ishak and Lexi Inks
6 Dating App Tips To Try If You're Looking For A Serious Relationship
By Lexi Inks
Think Your Partner Is Cheating? These Tarot Cards May Confirm Your Suspicions
By Kristine Fellizar
It's A Pleasure #53: Help! My Boyfriend Won't Tell Me Why He Stopped Going Down On Me
By Sophia Benoit
Get Even More From Bustle — Sign Up For The Newsletter