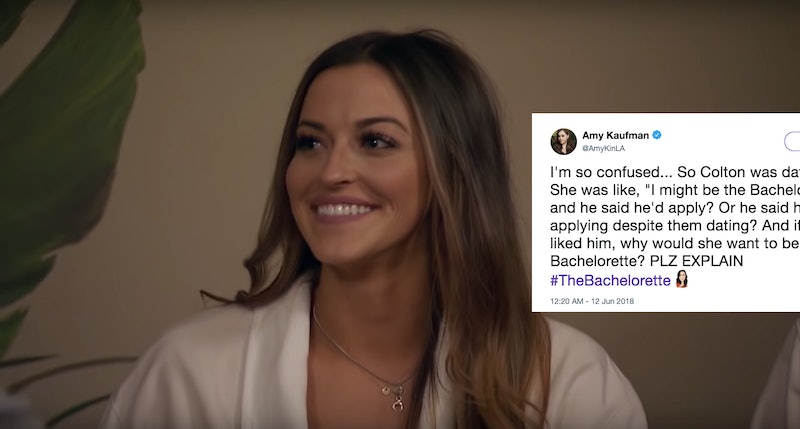 The premise for The Bachelorette entails multiple men vying for one woman's heart. This is a transparent situation that no one should be surprised by. But what was very surprising is when one of Becca Kufrin's contestants revealed that he dated one of her friends. The fans had plenty of tweets about Colton and Tia on The Bachelorette.

Just as a refresher, Becca and Tia both appeared on Arie Luyendyk Jr.'s season of The Bachelor. So they've both dated Arie, and now they've both dated Colton. To make matters even more complicated, Tia appeared on Monday night's group date with other girls from Arie's season. Of course, Colton was "coincidentally" on this date. You could cut the tension with a knife, and it was all even more awkward considering that Tia was just wearing a robe and Becca had Colton clip her toe nails.

As if running into an ex with the woman you're currently trying to date isn't uncomfortable enough, this was the reality TV equivalent of watching a car crash on the highway. No one actually wanted to see this, yet people just couldn't look away. Almost everyone felt vicariously awkward and just as confused watching Tia, Colton, and Becca in the same room during the spa date.

So, what does it mean when Tia and Colton say they "dated"? They went from having a vague "relationship" of some sort, to spending a weekend together (which sounds a lot more significant than just one date), to just kissing all within the course of the episode. Needless to say, the viewers were perplexed.

Tia shared her point of view in a June 11 interview with People. The Arkansas native revealed, "We started talking before my season started airing." Tia continued, "Colton was in the casting process for The Bachelorette, and he followed me on Instagram." That in itself is a little bit sketchy. Why would he randomly follow her on Instagram before she was ever on TV?

After that, it was actually Tia who initiated the conversation. She confessed, "I DM’d him first and within a few days he told me he had applied to be on The Bachelorette. But he hadn’t gotten the final call so we thought, we get along well, we might as well just keep talking and doing whatever this is. The whole time I kept thinking, ‘What are the odds that he would get on the show?’" Colton is a good-looking athlete who loves charity work. Of course, he was going to get on the show.

Apparently, they met up in Los Angeles for a date. Then Colton found out he was selected for The Bachelorette. Tia said, "things came to a halt" at that point. Tia's explanation does clear up a lot, but there are still so many unanswered questions and lots of confusion in response to this week's episode. The viewers had a lot to say about the Tia, Colton, and Becca love triangle.

More like this
A Guide To All Of Zach Shallcross' 'Bachelor' Filming Locations
By Brad Witter
10 Photos Of The Wildest Limo Arrivals From 'The Bachelor' Premiere
By Brad Witter
Zach Swears He Didn’t Look Up Contestants Before The Bachelor Began Filming
By Brad Witter
Zach Addressed His "Boring Bachelor Energy" After His Group Date With Latto
By Grace Wehniainen
Get Even More From Bustle — Sign Up For The Newsletter
From hair trends to relationship advice, our daily newsletter has everything you need to sound like a person who’s on TikTok, even if you aren’t.