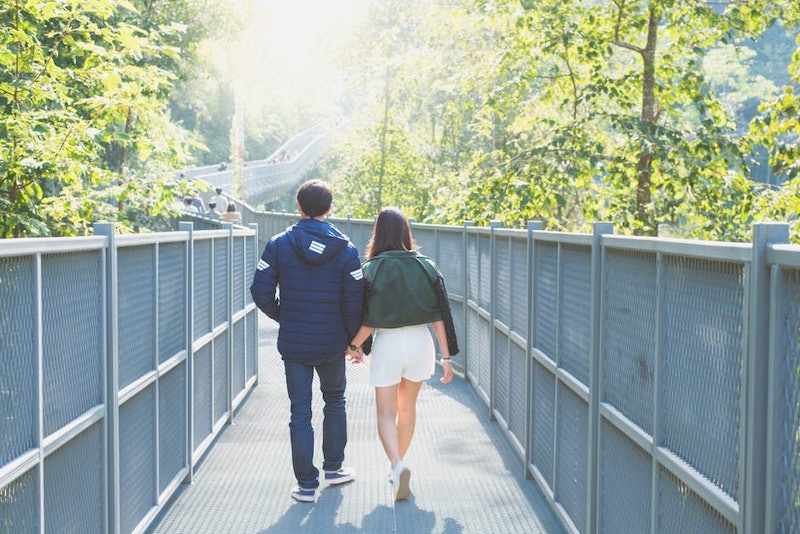 The beginning of a relationship is meant to be fun, easy, and relaxed. Instead of analyzing each other's every move, or stressing yourselves out with too much talk about the future, you should be having fun and getting to know each other.

That said, the moment things look like they might be heading in a long-term direction, you'll probably want to avoid making certain mistakes that can lead to problems later on in your relationship. Yes, I'm talking about ignoring red flags, moving too fast, and telling little white lies — all of which can come back to bite you in the future. But I'm also talking about falling into unhealthy ruts, which can be difficult to fix down the road.

"People develop habits very easily and they are difficult to break," NYC-based therapist Kimberly Hershenson, LMSW tells Bustle. "If someone is used to doing something one way, then asked to change, there may be resentment, which can lead to fighting and an eventual breakup."

Here, some pretty common mistakes that can lead to a breakup down the road.

1. Putting Your Own Life On Hold

Everyone gets wrapped up in their relationship early on, and that's OK — as long as you don't go overboard. "I've seen this happen so often when people begin new relationships... they somehow think every waking moment should be spent with their new partner," says certified relationship coach Tiya Cunningham-Sumter. "They put their life, hobbies, and interests on hold so they're always available to their new boo. It's a bad decision that leads to regret and actually wears the other person out."

The healthier alternative? Giving each other some space, and having lives outside your relationship.

Moving too fast is another big mistake. "If you're already talking marriage and the relationship has just begun, that could be a problem," says Cunningham-Sumter. "It's important to spend time getting to know each other before big decisions are made."

In an effort to play it cool in the beginning of the relationship, you might find yourself going with the flow and not speaking up when something bothers you. But this can and will lead to problems down the road — especially if you're ignoring red flags.

"Many people discount some warning signs because some other aspect of the person or relationship are good," Lesli Doares, couples coach and communication expert, tells Bustle. "But not addressing these aspects can be fatal long-term. Maybe someone has the right job or the right look but doesn’t listen. But if you want to be in a relationship or not be alone, there is a good chance that you are ignoring red flags."

4. Making It All About Sex

Hey, this one's entirely up to you. If you want to make this all about sex, then go for it. But do keep in mind how it can, in some instances, change how a long-term relationship might play out.

As Doares says, "While not always a problem, getting involved physically may again blind you to things that will create problems down the road. If the sex is good, you might think that is a great foundation — but it won’t keep the real challenges at bay."

5. Not Truly Knowing Yourself And What You Want

Just because you're in a relationship doesn't mean you should lose track of figuring yourself out, and what you want out of life. "If you enter a relationship not really knowing who you are, that sets things up for failure down the road," says author and life coach Jaya Jaya Myra. "If you are not defined as an individual, when you get to that point ... you may find you've become someone vastly different, with different dreams and desires that your partner can't support. It's best to know what makes you tick before you try and find Mr. or Miss Right."

Again, building a relationship based on surface things — like great sex, or how much money someone has — can set you up for long-term failure. "Unless your relationship is strictly business, it would serve you well to cultivate a real connection with your partner," Myra says. "Not how good looking they are or how much money they make, or that they check off everything on your 'want list' for a partner. All that ultimately is inconsequential to how you feel when you are with someone. Learn to love and be devoted to the person you are with, not who they are on paper."

You might find yourself, early on in a relationship, repeating bad habits from previous partnerships. And that really can spell disaster, if you don't take the time to figure out what went wrong, and do what you can to avoid the same pitfalls.

"We should learn something about ourselves with every relationship, especially the ones that ended," says Cunningham-Sumter. "We should be better as a result of them. Paying attention to the changes you need to make in order to make this new relationship work will surely set you up for success."

8. Not Being You Truest Self

"We tend to keep the not-so-great qualities under wraps for as long as we can, but we all know that this isn't sustainable," life design coach Leannah Lumauig tells Bustle. Eventually, you'll have to come clean about all your secrets, quirks, and eccentricities. Or, your partner might find these things out on their own, and that can lead to fights — as well as a lack of trust. It's much healthier for you, and your relationship, to be honest from the start.

9. Failing To Set Up Healthy Boundaries

Again, there's a lot of appeal in seeming game for anything during those early days. But if you guys are talking long-term, boundaries will be key. "When we don't draw the line on where our boundaries are, we are communicating to our partners that we are OK with something that actually bothers us," says Lumauig. "We are setting false expectations. This can lead to confusion and distrust down the road."

10. Making Excuses For Their Unacceptable Behavior

Is your partner kind of rude? Do they suck at listening? Are they a little bit mean? If so, speak up about it now, while the problem is still manageable, instead of letting it go on for years.

"If you let your partner get away with things that aren't acceptable to you in the beginning, that behavior will never change and could cause the end of the relationship," says life coach Mitzi Bockman. This is due not only to growing resentment, but also the fact many people with these bad habits get worse with time, as they begin to let their guards down. And that's something you definitely want to avoid.

11. Saying Yes When You Really Mean No

The start of a relationship is all about establishing how you'd like to be treated, and how you'd like the dynamic of your relationship to be from now on. So don't get into the habit of saying "yes" when you really mean "no." As psychotherapist Beatty Cohan, MSW, LCSW, AASECT says, "This pattern will make you angry and resentful. Much better to discover his and your emotional communication and problem solving skills — or lack of."

Unless you want to live a lie for the next 30 to 40 years, or live in fear of being found out, resist the urge to tell fibs during the early years of your relationship. Not only will this set you up for a stressful life, but lies don't make for the healthiest foundation for a long-term relationship.

As licensed psychologist Dr. Gia Daino, PsyD says, "A relationship is based on mutual trust respect and understanding. If you aren’t open and honest with your partner, how can a solid foundation be developed?"

It may not seem like a big deal, but if you notice early on that your love languages don't sync up, it can lead to problems down the road. "It’s important to get a sense of your partner’s love language, how they give/receive love, early on in a relationship," says licensed marriage and family therapist Christie Tcharkhoutian, a professional matchmaker for Three Day Rule. "This will prevent placing attributions of your partner’s behavior and wrongfully placing beliefs about their partner’s feelings when it may just be a factor of a difference in love language style. Understanding love languages early on in a relationship will help you understand your partner early on."

And that can mean saving your relationship, and keeping it healthy for years to come.