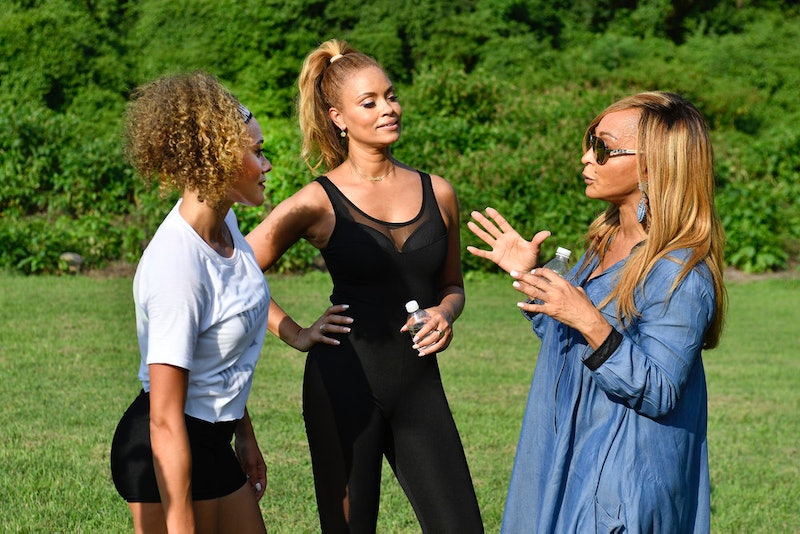 There are definitely no shortage of Real Housewives shows to watch, and it seems like everyone has a favorite. Unfortunately, it also seems like the long-running cities like New York and Atlanta steal most — if not all — of the attention. If there’s one show in the franchise that's under-appreciated, it's definitely The Real Housewives of Potomac, but after reading this list, you’ll undoubtedly agree that RHOP deserves more attention.

RHOP follows the lives of stars Gizelle Bryant, Ashley Darby, Robyn Dixon, Karen Huger, Charrisse Jackson-Jordan, and Monique Samuels in the city of Potomac, Maryland — which is just outside of Washington D.C. It's had two full seasons so far, and RHOP just kicked off Season 3 in April, along with the addition of a new cast member Candiace Dillard. And although the ratings for RHOP aren't as high as RHOA or other more-talked-about Real Housewives shows, that doesn't mean that RHOP doesn't have its own (albeit smaller) fan base.

If you're one of the people still on the fence about RHOP, then let me offer up a number of reasons you should immediately start catching up on reruns of the show.

1. Some Of The Ladies Seem Like They're Actually Friends

Specifically Gizelle and Robyn, who claim to have been close friends for years — and they actually behave like it.

2. While Others Seem To Really, Really Dislike One Another

Gizelle and Season 2's newcomer Monique, for example, not only argued frequently, but they didn't seem all that fond of one another. In the reunion special, the ladies both claimed that their relationship had improved since filming, but in Season 2, these two seemed to really dislike each other. Which made for lots of cringeworthy and watchable moments.

3. Etiquette Is Of The Utmost Importance

Especially to Karen, also known as the Grande Dame of Potomac. She's always preaching about proper etiquette, and calling out other cast members who doesn't adhere to the rules.

4. The Shade Is Real & Hilarious

Like full-on arguments over who's technically "hosting" a specific event, people being kicked out of parties, and throwing shade about each other's romantic lives.

5. No One Ever Seems To Avoid A Confrontation

Confrontations are always welcome on RHOP, and always enjoyable as a viewer.

6. Surprise Ambushes Are A Frequent Occurrence

The ladies of RHOP love a good surprise ambush. Especially when someone is caught still in the hair and makeup chair.

7. Potomac Is A Historic City

That means lots of brunches and afternoon tea parties at historic locations.

8. Some Of The Characters Live Really Lavish Lifestyles

Specifically, Monique and Karen — who refers to her husband as "the black Bill Gates."

9. While Others Are More Realistic & Unapologetic

Gizelle and Robyn are both a little more down-to-earth when it comes to finances. Gizelle talks about wanting to be successful to inspire her daughters, while Robyn has been honest with viewers about her and her husband's financial troubles.

10. The Romantic Relationships Are Complicated

And none of the husbands seem camera shy, which means lots of marital arguments in front of the cameras.

11. The Ladies Apologize When They Mess Up

Reality stars mess up too, and there's nothing more enjoyable to watch than an argument that ends with someone apologizing and realizing they messed up.

No shade, but the RHOP stars are on the rise. Meaning they aren't jaded or over reality television and seem like they want to give us viewers an enjoyable show.

To lift her spirits after separating from her husband Eddie, Charisse decided to turn one of the bedrooms in her house into a "Champagne room." It's exactly what it sounds like — a fabulous sitting area filled with sparkling wine and accessories.

Has your interest been piqued? There are a few full episodes of RHOP Season 3 available on Bravo's website, or check your local listings to see when you can get caught up on repeats of RHOP.