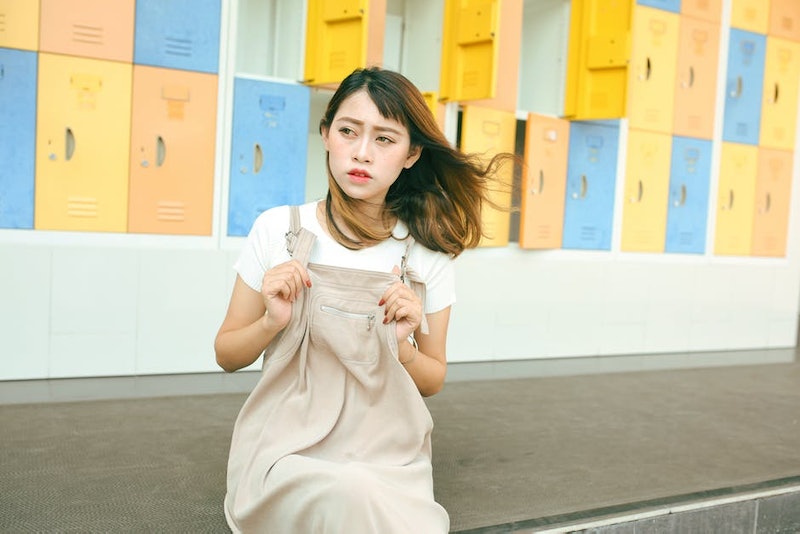 If you don't have a great relationship with your mom, or if you dealt with all sorts of drama while growing up, it may be because your mom is a narcissist. Now, this just doesn't mean she's rude or kind of selfish, though that's definitely part of it. True signs of narcissism can fall into what's known as Narcissistic Personality Disorder, which can wreak all sorts of havoc on your mother-daughter relationship.

That's because narcissists are unable to care about anyone other than themselves. So if you two always fight, or if you can't seem to get your mom to give you any (healthy) attention, this may be why. "Narcissists have an excessive need for admiration, disregard others' feelings, cannot handle any criticism, and have a sense of entitlement," NYC-based therapist Kimberly Hershenson, LMSW tells Bustle. "It is difficult to have a meaningful relationship with a narcissist because conversations are always one-sided and about them. Narcissists also manipulate situations and violate boundaries, so trust becomes an issue."

Even though it can feel impossible at times, there might be a way you two can work things out. "Boundaries are incredibly important," Hershenson says. "You need to learn to say 'no' when she is being intrusive. Don't engage in arguments. It's easy to want to defend yourself when attacked, but narcissists are unable to hear you. Simply tell your mom you disagree and end the conversation." Got it? Now read on for a few signs this may be what you're dealing with.

1. The Conversation Always Comes Back Around To Her

If you can't seem to have a conversation without the topic swinging back 'round to her, take note. "You could be talking to your mom about a health scare you had and the conversation drifts to her upcoming vacation," Hershenson says. And it seems to happen without fail.

The thing about narcissists is they're incredibly likable, and often do what they can to win everyone's favor. But it doesn't last long. As Hershenson says, "If people seem to gravitate towards your mom and she is well-liked on first impression, but overtime her interaction with others becomes a negative experience, she may be a narcissist."

3. No Matter What, She Always Ends Up The Victim

Dealing with a narcissist can be a draining experience, mostly because they always find a way to become the victim. As Hershenon tells me, you might notice that your mom always complains about being "misunderstood." She might also find a way to feel hurt, even when the issue at hand is clearly not about her.

4. She Cares A Lot About What Other People Think

While it's fine to want nice things, your mom likely takes it to the extreme. "Narcissists like to display a high status and emphasize their prestige," Hershenon says. "If your mom flashes new purchases or brags constantly, she may be a narcissist."

5. While She Can Dish Out Criticism, She Certainly Can't Take It

Narcissists are pretty good at finding fault in others, but struggle to see any issues in themselves. They're also really bad at receiving criticism, and will often become way too upset when it's suggested they aren't perfect. "Most people don't like criticism, but narcissists are hyper-sensitive to it," Hershonson says. Your mom may cry, scream, or throw tantrums whenever she's being criticized — as well as when she merely thinks she's been criticized.

6. She Needs The Attention On Her At All Times

Most people enjoy receiving some attention, but your narcissistic mom may kind of need it. "The world revolves around her and her issues, and she will not handle it well when the spotlight is off of her, or when you or someone else tries to take the light away and talk about something you are struggling with," says psychologist Dr. Nikki Martinez. And it can be incredibly difficult to deal with.

7. There Are Definitely More Empathetic People In The World

Traditionally, moms are supposed to be caring, loving, empathetic people. So it truly can suck when yours can't seem to care about anyone else's needs. As Martinez tells me, she may struggle with empathy, and may unable to put your needs first.

8. She's Mixed Up In All Sorts Of "Misunderstandings"

Because narcissists believe the world revolves around them, it can (and eventually will) lead to misunderstandings. "Women like this struggle with relationships, as they struggle to connect with others," Martinez says. "They are fine as long as the focus is on them, but they will often get in arguments over misunderstandings as they assume anything anyone says or does is about them." Even when it's totally not.

9. She's Easily Hurt When You Make Decisions That Don't Involve Her

Whenever you make big decisions — like moving to a new job, or deciding to get married — is your mom able to handle it? "A narcissistic person operates from self protection and if their ego is bruised or they feel a decision was made they could not control they can become cruel, blaming, defensive, and project immense amounts of guilt and shame into the other," psychotherapist Daniel Sokal, LCSW, ABD tells Bustle. If that sounds familiar, it may be that your mom is a narcissist.

10. She's Never Been Able To Let You Win

Look back throughout your history together and see if your mom has tried to "win" every situation. As licensed clinical psychologist Marla Vannucci, PhD says, "This behavior can range from trying to look younger or more attractive than a daughter, flirting with a child's romantic partner or spouse, competing with a child in business success (needing to make more money or be more successful, etc)." The list goes on and on.

11. She's Definitely Ignored Your Needs Over The Years

Since narcissists are so focused on themselves, they often find it difficult to give anyone else the time of day. As Vannucci tells me, you may have been ignored as a kid, or routinely left with nannies or older siblings. And now that you're an adult, you may struggle to get your mom on the phone, or notice that she doesn't listen or let you talk whenever you visit. Whatever the case, a pattern of neglect is definitely there.

12. It Doesn't Take Much To Offend Her

A narcissist's feelings can be hurt incredibly easily, so take note if your mom feels slighted all the time and over the tiniest things. "If you say, 'My mother-in-law gave me a lovely birthday gift,' she might reply, 'Well, I’ve given you lots of beautiful gifts, haven’t I?'" says therapist Karen R. Koenig, MEd, LCSW. There's just no winning with her, or making her happy.

13. You're Not The Best At Making Decisions

Growing up with a narcissistic mom may have had a profound impact on you, and may even have led to an inability to trust yourself. As Koenig tells me, this is all thanks to your mom's inability to show any empathy. When you grow up feeling invalidated, with thoughts and feelings that are ignored, it can leave you all sorts of confused as an adult.

If you think you're dealing with a narcissistic mom, or if you had one growing up, definitely consider going to a therapist for help. Aside from learning how to better deal with your mom, therapy can help you uncover all the damage she's likely done over the years.