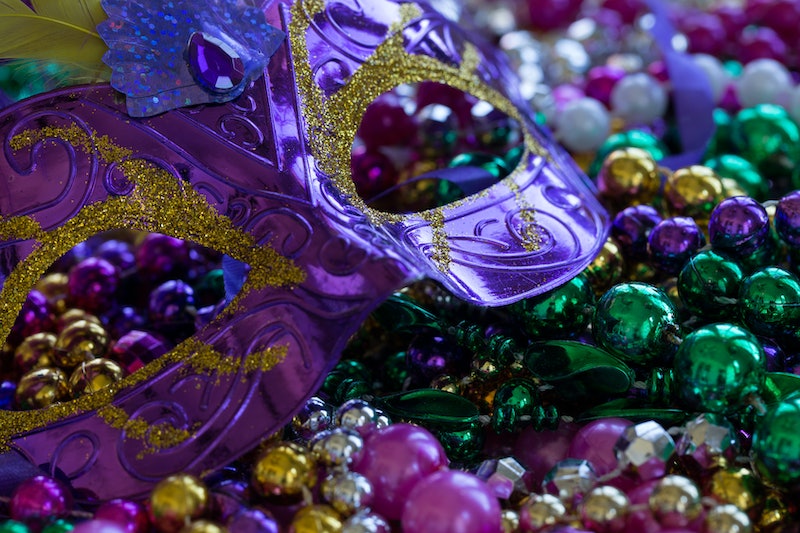 I doubt there's anyone in America who hasn't considered taking a trip to New Orleans, Louisiana for Mardi Gras. The city itself looks amazing but the celebration of Mardi Gras goes to the next level. Every year I see beautiful Instagram pictures posted from Mardi Gras that make me promise myself I'll go the year after. While I have yet to actually attend Mardi Gras, I've thought a lot about the holiday.

So, where did Mardi Gras start? According to Mardi Gras New Orleans, the celebration began in Medieval Europe, before moving through Rome and Venice. It ended up at the French House of the Bourbons, before ultimately being carried to New Orleans in 1699 when the French-Canadian explorer Jean Baptiste Le Moyne Sieur de Bienville landed some 60-miles south of what's now the city in present day. He named the plot of land "Pointe du Mardi Gras," as it was the eve of Mardi Gras. The holiday was officially celebrated in the US for the first time in 1703, and when New Orleans was established in 1718, the party was moved to the city.

Mardi Gras is a time of enjoyment and fun. If you do go to New Orleans for it, make sure to take lots of pictures for your social media platforms. Then read on for funny Mardi Gras Instagram captions to use when you post them.

3. "There's a thing I've dreamed of all my life, and I'll be damned if it don't look like it's about to come true-to be King of the Zulu's parade. After that, I'll be ready to die." — Louis Armstrong

4. "It's a great party, and anyone who doesn't enjoy Mardi Gras is not of this world." — Franklin Alvarado

5. "If no tourists came, we'd still have Mardi Gras. Mardi Gras is a state of mind." — Ed Muniz

6. "A great, wild, adult thing to see is the costume competition in front of the bar Oz on Bourbon early morning on Fat Tuesday." — Bryan Batt

7. "I think Mardi Gras is a symbol that we're down but not out." — Arthur Hardy

8. "Mardi Gras is the love of life. It is the harmonic convergence of our food, our music, our creativity, our eccentricity, our neighborhoods, and our joy of living. All at once." — Chris Rose

9. "Not even Katrina could stop Mardi Gras." — Tony Scott

11. "New Orleans is unlike any city in America. Its cultural diversity is woven into the food, the music, the architecture — even the local superstitions. It's a sensory experience on all levels and there's a story lurking around every corner." — Ruta Sepetys

12. "I started making calls a week after Katrina. The captains all said the same thing: you can take away our homes, but you can't take away our Mardi Gras." — Arthur Hardy

13. "Normally, Mardi Gras is when we make all our money to pay our taxes and back bills." — Earl Bernhardt

Thinking of heading to New Orleans for Mardi Gras this year? All you need is a few friends, a lot of beads and a great Instagram caption. Then you're all good to go.