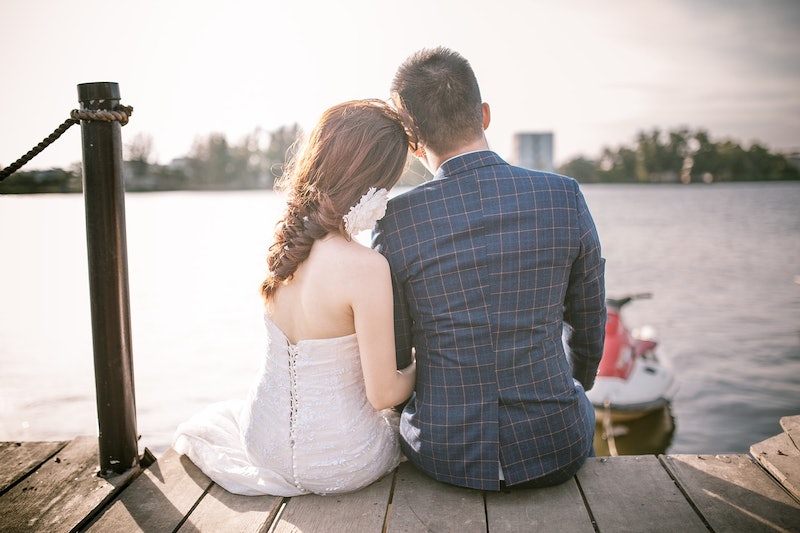 Married life isn't always so easy as it seems. While it's pretty normal to have an argument here and there, if you're fighting all the time, it might be a way to know that you should end your marriage and move on, before things get even rougher. Throw kids into the mix, and it can be even scarier. Yet, if if it's for the best, it's time to make a move, get some closure, and handle the situation as best as possible.

As a certified health coach, I work with clients on finding ways to make relationships healthy and happy, and when there are times where you're feeling more drained and upset than usual, it could be a clear indicator that a change is needed. If you're married, it's even harder to separate, as there are so many other variables involved, such as kids, familial relationships, and just plain history, as it's likely you've been together for a substantial amount of time to warrant such intimacy and dependency. Figuring out what to do with the home and finances can also be tough, so maybe consider speaking with someone to help tackle the logistics. Here are 15 ways to know that your marriage is destined for divorce and a few ways to handle the matter as best as possible, for everyone involved.

1. You're Made To Feel Ashamed

If you're not comfortable being vulnerable with your spouse and are even made to feel ashamed about it, it's not a good marriage. "When you share your struggles and difficulties you not only strengthen your bond through your vulnerability but you also set the precedence for an open and nonjudgmental relationship for the future," says Dana Peters, life coach, over email with Bustle.

2. You're Having Tension Between Families

"While I'd advise anyone to execute their best judgement, it's never the best idea to keep secrets about your family," says Peters. "Ultimately the truth comes out and your partner may question why you felt you couldn't be straight with them about any of your family issues," Peters adds. Plus, if family drama is too tense, it could cause several issues in the marriage that might not be worth the struggle.

"There has been a lot of research on couples and divorce. One of the leading researchers for predicting divorce is John Gottman," says Erika Fay, LMFT, transformational coach and licensed marriage and family therapist, over email with Bustle. Fay says that one of Gottman's principles includes using "criticism," where you're "attacking your partner's character," with the intent to make him or her feel in the wrong. This is a big issue that could lead to divorce.

4. You Lie About Finances

Peters says that if you lie about finances, you're jeopardizing the relationship and the trust between you and your partner. "It may be a difficult conversation to have but being transparent about your financial situation may help you avoid smaller arguments based off a misunderstanding about each others financial situations," Peters says. If there's financial secrecy, it might be time to get a divorce to protect your future.

5. You Have Different Thoughts About Having Children

If you have differing opinions on how to raise children (or even if you want children to begin with, or how many you'd like), it could mean your future in the marriage isn't as promising as you had hoped, explains Michelle Sinkovits Ferguson, Divorce Attorney & Partner at Greenberg & Sinkovits, LLC, over email with Bustle.

6. You Have Serious Contempt

"This looks like insults and name-calling, such as wimp, fat, stupid, ugly, slob, lazy, etc.," says Fay. It also includes "hostile humor, sarcasm or mockery as well as negative body gesture and tone. It's common to see sneering, rolling your eyes, and curling your upper lip," Fay adds. If this is happening, a divorce could be the best solution.

7. You Think About Other People Constantly

If you're fantasizing about being with other people or checking other people on regularly, it could mean you're not happy in your relationship and your marriage might need to end in order to make room for a new life with a different partner.

"This is withdrawal from the conversation or relationship to avoid conflict. In my work with couples, I have seen that each of these can appear with all couples from time to time. But healthy couples don't use them as often and promptly make attempts to repair if any of them are used," Fay says. If you're no longer putting in the effort to fix things, it could be time for a divorce. Ferguson also says that a lack of communication can be a big problem for relationships down the line.

9. You Can't Agree On Decisions

According to Dr. Judith H. Tanenbaum, a psychiatrist in New York City over email with Bustle, if you can't agree on decisions, from big to small, it can cause more conflict within the marriage and lead to less satisfaction. If you can't be a team, it might be best to end the marriage.

10. You Don't Trust Each Other

Trust is so important for a marriage to work. If you no longer trust your partner, it could mean that it is destined for divorce and you need a clean slate. If you think your partner could be cheating or lying to you, talk to him or her about it first, and if it's not resolved for too long, consider calling it quits.

If there's abuse of any kind, emotional or physical, it's time to say goodbye and move on. Violence should never be tolerated, and it clearly signifies an unhealthy and toxic marriage. It's normal to be scared, but letting go and getting a divorce to protect yourself will better your future.

12. You Don't Agree On What Constitutes Cheating

Is it cheating if you check out other people? If you dance with others when out at a nightclub with your girlfriends? If you accept a drink from someone who is clearly hitting on you? Defining these rules in a marriage is super important, as these boundaries exist, and if your partner starts violating your commitment, it could be time for a divorce.

If you're one-sided in the chore-sharing tasks at home, it can make a partner seem unequal to the other. Ideally, couples should share these duties to foster greater satisfaction and equality within the household, most importantly, the relationship. If you're doing all the work, you're more likely to want to get a divorce.

Things get busy, so not having sex like you used to when first dating or early on in marriage is pretty normal for couples, with time. Yet, if your sex life is zero, and it's mostly because you're no longer attracted to your spouse or interested in having sex with him or her (or are maybe even fantasizing about sex with another person), it could be a clear predicator of divorce.

15. You Spend No Time Together

If you're avoiding your spouse or simply just not thinking to have quality, bonding time together, in favor of other relationships or solo time, it could mean that your relationship and marriage is headed for a divorce, advised Sam Margulies, pHd, Esq, over interview with Psychology Today.

All of these situations can hurt an already unstable marriage with time, so unless you're open to making serious changes or getting help, it might be time to say goodbye and open a new chapter.

More like this
Emily Ratajkowski & Pete Davidson's Astrological Compatibility, Revealed
By Nina Kahn
Bumble's "Compliments" Feature Lets You Message Before You Match
By Lexi Inks
15 Ways To Deal With A Toxic Family During The Holidays
By Gabrielle Moss and Carolyn Steber
Michelle Obama Opened Up About The "Discord And Discomfort" Of Marriage
By Stephanie Topacio Long
Get Even More From Bustle — Sign Up For The Newsletter