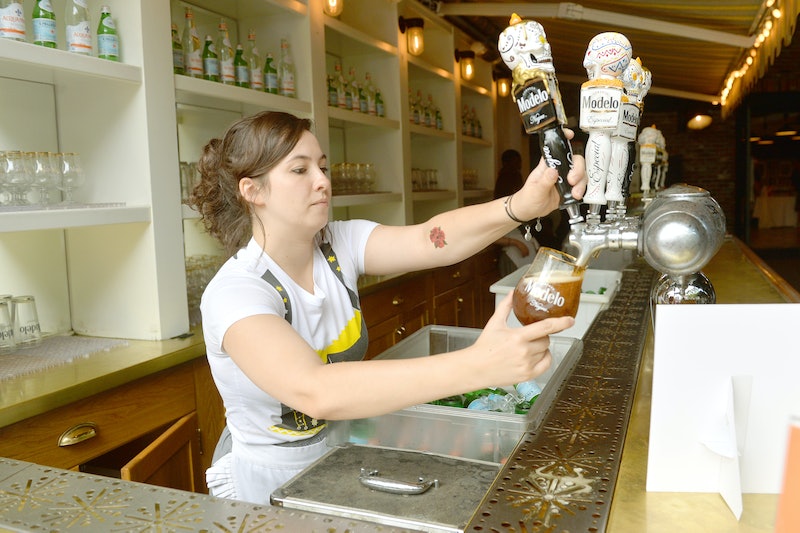 If you've ever worked in a customer service job, or sat in stunned silence while someone acted horribly in a restaurant, then you know people often say whatever they want to bartenders, waiters, and flight attendants. This has a lot to do with stress levels and mild "hangry" episodes, but rudeness can also come about due to unreasonable expectations — and plain old bad manners.

Whatever the case may be, there's no excuse for rude or demanding behavior. And if you're stressed, there's do not take it out on the people trying to help you. "There [is the] misconception that people that fill these positions are meant to serve unconditionally — which is furthest from the truth," says etiquette expert Keyonna Coburn, owner of First30Seconds.

Not to mention, following proper bar/restaurant/plane etiquette can mean a nicer experience for all involved. "The way you speak to people in the service industry directly affects the service you receive," Coburn says. (Extra bread basket, anyone?)

With that in mind, read on below for a few things you should never ever say to your bartender, waiter, or flight attendant. (Because remember, they are real people. And they are handling your food.)

To assume that bartending isn't a profession, or that your serve doesn't want to be there, is also all sorts of condescending. As Josh Cameron, head bartender at Boulton & Watt says, "For the amount of research, training, and dedication we put into each shift and each drink, I think it's disrespectful to assume we’re only paying our way to something else."

There's never any excuse to call your bartender or flight-attendant sweetie, honey, or any other pet name. "Avoid endearments ... and stick to the server’s name," says Sharon Schweitzer, an international etiquette expert, author, and the founder of Access to Culture. "These terms of address can make others uncomfortable if they don’t know you well, and may be perceived as condescending or belittling."

I'm all about saving money at the bar, but this Q can put bartenders on the defensive. "You're essentially telling me you have every intention of drinking too much," says Will Benedetto, a cocktail curator at In Good Company Hospitality. And that can affect your service.

Not everyone has liquor and mixed drink lists memorized, but it's a good idea to approach the bar with at least some idea of what you'd like to drink. "While this is probably well-intentioned, it doesn't give us as bartenders much of a chance," Benedetto says. "We don't know if you have food allergies, what your taste is, and what your expectation range is."

I'll say it again, waiters are people, too. Don't shout to get their attention or (cringe) snap your fingers. "Snapping your fingers or waving to gain the attention of a waiter or bartender can appear entitled and disrespectful," says Coburn. A simple nod or some eye contact will do.

Plenty of things can go wrong in the long chain of events between placing your order and actually getting your food. So try to be understanding if your order isn't perfect. "Don’t order them around or express over-the-top discontent with a minor mistake," Schweitzer says. "Use your common sense and treat them as you would like to be treated."

Servers makes, like, two dollars an hour without tips, so don't even think about asking if your coupon will apply to the tip. "While coupons may cut you a great deal on your meal, you should still tip your server at least 15 percent of the total bill," Schweitzer says. "Don’t stiff your server!"

Even if you've fallen madly in love with your bartender, resist the urge to ask them out — especially while they're still on shift. As Schweitzer says, "Flirting with the wait staff is a sure way to cause awkward encounters, and may even get you escorted from the establishment."

Your server does not decide the prices, so there's really no point in freaking out over the bill, Schweitzer tells me. "Don’t shoot the messenger and make them feel uncomfortable by ranting about the price of the sandwich."

Restaurant staff have a plan when they choose where to seat you, and asking to switch tables can really mess that up. "If the assigned seat is truly bothersome or uncomfortable, feel free to ask for an exchange," Schweitzer says. "But in most cases, stick with the assigned seat to ensure a smoother flow of the restaurant."

Are you running late to something, and want your food to come faster? "Not the server’s problem," says etiquette expert Lisa Grotts. "Next time plan ahead and come earlier. If you’re that worried about time, there’s always the fast food option."

Traveling can be stressful AF, and you might be tempted to make special demands. But just like a server doesn't decide the price of sandwiches, Grotts tells me flight attendants have no power over flight schedules.

Figuring out the right tip is always a bit confusing, but don't turn to your server for help. Grotts suggests Googling it instead. But the standard is usually 15 to 20 percent.

If you've been waiting for a drink for five hours, go ahead and ask when or if it'll ever arrive. But if the restaurant is busy, try to be understanding of a slight delay. And don't punish your server with a smaller tip. "Sometimes things are out of their control," Grotts says.

Divvying up a bill is a lot of math, and it can make your head spin. But let that be your problem. "Split the check among yourselves," Grotts says. "If someone has to pay a few cents more they can make it up the next time." (Or you can use one of these nifty apps.)

Being polite to bartenders, waiters, and flight attendants, no only makes you a better person, but it can even score you better service. So keep that in mind the next to you step into a restaurant, bar, or plane.