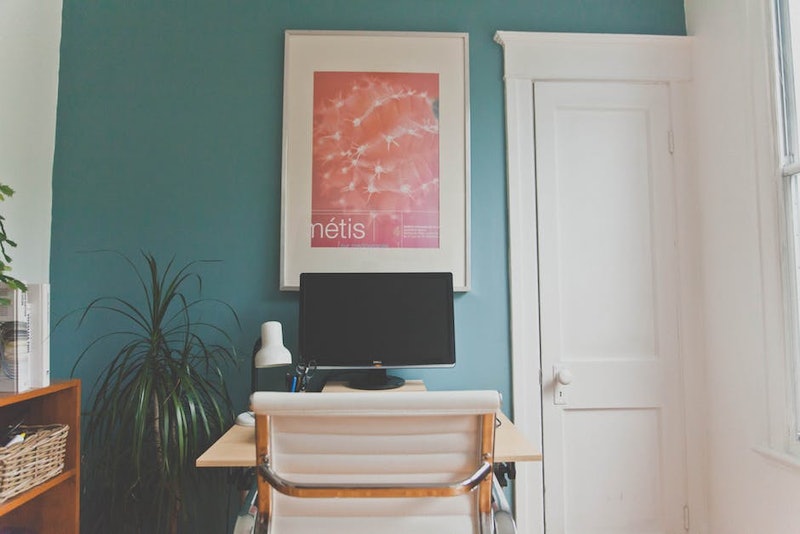 How much stuff is too much stuff is entirely subjective. You may have drawers full of kitchen gadgets and closets packed with clothes that someone else might view as way too much, but for you it's just enough. That's why, when it comes to figuring out if you own too much stuff, you really need to evaluate your own life and how everything in it makes you feel.

That said, if you totally relate to all the signs below — you're wasting money, losing things, or feeling super stressed — it's probably time for a clean out. So, where can you begin? As organizational expert Dorothy Breininger, star of the show Hoarders says, "Decide on a theme for your space. If you can remind yourself about the outcome you’re going for, it’s easier to make decisions. If you’re going for Zen, then it’s easier to declutter ... that space." Just as an example.

Once you have an end goal in mind, it'll be easier to get rid of (and donate) the extras. Hold yourself to it, and don't stop de-cluttering until you're happy with the look and feel of your space. It'll be a difficult process, either because you're used to the sheer volume of things, or you've somehow convinced yourself that you need each and every item you own. But if you really, truly evaluate your life and living space, you'll likely see that's not the case. Read on for some signs it's time to purge, then go ahead and do it.

1. Clothes Are Lying All Over The Floor

If you have clothes piling up in the corners of your room, it's a good sign you own way too many pieces. "Folks who have fewer items in their closet tend to care for the small amount of clothing they have," Breininger says. Because they don't have any excess, they can't afford to leave things lying around — making this an excellent barometer.

2. You Don't Have To Unpack After A Trip

It's one thing to get home from a trip and then live in the same pair of jeans for a week. But if you can leave all your stuff in a suitcase without noticing a deficit, take it as another sign you own too much stuff. "For people who don’t keep a lot around, they can’t afford to not unpack and put their things away," Breininger says.

3. You Have Doubles (And Triples) Of Most Things

When cleaning up, do you notice duplicates? (Two copies of the same book, three red lipsticks, etc.?) "When we allow clutter to build up we often lose track of certain items or the quantity," says Anna Bauer, Thumbtack home organizer and owner of Sorted by Anna. "Instead of being able to easily find something we continue to overbuy to 'replace it' resulting in multiple pairs of similar shoes, eight different toothbrushes, or 20 boxes of paper towels."

The moment you consider looking into storage is the moment you have too much stuff. As Bauer says, "It’s time to pair down and reevaluate your belongings ... when you’d rather pay to place your stuff in a storage unit miles away or in your basement than deal with letting the items go." It can be tough to part ways with your possessions, but it's often worth it not to waste all that money.

5. All Your Closets Are Overflowing In A Big Way

Closets obviously exist for storage purposes, but all that hidden space can mean your things will slowly get out of control. "Do you have a closet where the mere act of opening it causes chaos? It might be a drawer, an area in your garage, or a shed in the back," Natalie Angelillo, vice president of community at OfferUp, tells Bustle. "If you have a place for things that are 'out of sight, out of mind,' you should probably think about decluttering."

6. You Have Lots Of Useless Items Taking Up Space

If you've procured some great free things over the years, it can be difficult to let 'em go. But unless you're a true connoisseur of collectibles, it's probably time to clean up. "It’s hard to let things go that were free or on sale, because of the perception that you got a good deal or you think it must be worth something," says Angelillo. But usually, if you're honest with yourself, you'll realize it's all just clutter.

7. It's Been A Minute Since You Allowed Anyone To Visit

If your clutter feels normal, check in and see how you feel about inviting someone over. "One in three (34 percent) of Americans say they avoid having people over because their house is so messy," says Debra Johnson, a home cleaning expert for Merry Maids. If this is you, take it as a sign.

8. Your Night Stand Is Totally Covered With Junk

The state of your nightstand can say a lot about your clutter situation. "When nightstands go from practical pieces of furniture to clutter collectors, it’s time to either toss the miscellaneous items or find it a permanent home," Johnson says. "Everything should have a place." And if you can't find that place, the extra stuff probably needs to go.

9. You Have To Move Things Before Sitting Down

When your home is particularly over-stuffed, it can reach a point where you need to clear a spot on the couch just to sit down. "This could be that you’re unorganized or have too much stuff," Johnson says. "Either way, furniture is not the place to store things — unless it’s intended to add storage to the home (like ottomans with storage space)."

10. You Have More Than One Junk Drawer

Every home has a junk drawer for all those rubber bands, twisty ties, and matchboxes. But you really should only have one. "One is OK, multiple is not," Johnson says. And, she asks, "if it's in a junk drawer, do you really need it?" (Probably not.)

11. You Don't Open Your Online Purchases Right Away

Do you impulse shop online, then leave the unopened packages lying around your apartment? Or quickly forget what you even ordered? "For those who seem to have a surplus of everything, they often make purchases because they want it," Breininger says. Not because they need it.

12. You Don't Let Things Go Because You're Emotionally Attached

It's perfectly OK to hold onto meaningful items, even if you don't use them every day. But if you get sentimental about everything, the stuff in your life can quickly add up. "Sometimes we become emotionally attached to 'things' that we probably don't even need," says Erin Condren, creator of the LifePlanner™ and expert organizer with Liberty Mutual Insurance. When that happens, it's smart to get some help. "I like to call on friends to help determine what should be saved or 'tossed' (donated or in the trash). It can be hard to pare down, but it is so crucial!"

13. Things Are Spilling Over Into Other Areas

If you have bathroom stuff in your living room, or living room stuff spilling into your bedroom, it could be a pretty obvious sign you have too many things. "Your stuff should have a place it belongs," professional organizer Felice Cohen tells Bustle. "Most people think they need a larger home, but the truth is they need to get rid of stuff."

14. Your Stuff Is Stressing You Out

Your home should be your sanctuary, so take note if you walk inside and instantly feel stressed. Same is true if your stuff has become a chore. As Chris Seman, president of the estate sale website Caring Transitions says, it's a bad sign if "taking care of, procuring, or moving stuff around the house becomes a priority and the 'need' to do it takes over other areas of [your] life." Not good.

15. You're Having Financial Troubles

Another way to tell if you have too much stuff? Your belongings are causing financial problems. As Seman tells me, this could be due to overbuying (i.e., getting multiples of things, or buying lots of extras you don't need). But it could also show up in the form of lost bills, which might be disappearing in your piles of junk.

If your belongings are causing problems like this in your life, consider it a major sign you have too much stuff. But, if you feel like you're happy and healthfully functioning in your home, the amount you own is likely nothing to worry about.