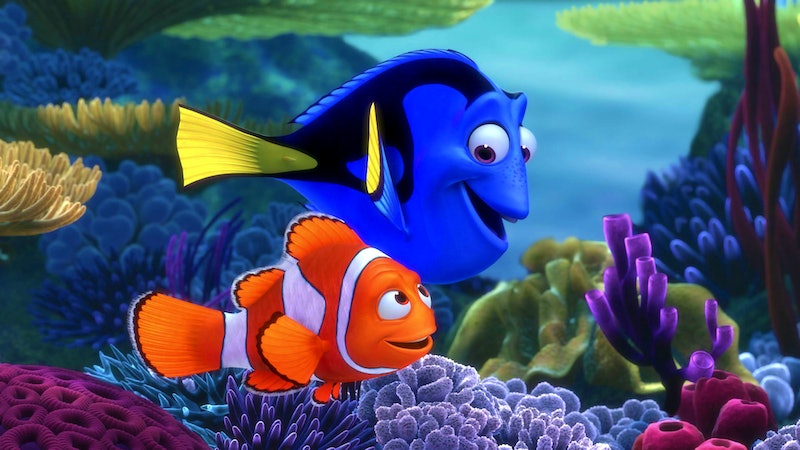 From its debut in 2003 until Toy Story 3's run in 2010, Finding Nemo was the most successful film Pixar had ever produced. The movie made over $900 million at the worldwide box office, and it also sports the highest Rotten Tomatoes rating (99 percent) of any Pixar film that doesn't have the words "Toy Story" in its title. So anticipation is running high for the film's sequel, Finding Dory, but just how does one get ready for a sequel of this magnitude? By remembering the first film, naturally. That's why I've gathered 16 Finding Nemo quotes to prepare you for Finding Dory .

If it's been a while since you've seen the first film, here's one thing you should know right off the bat: Dory completely steals the show. The forgetful blue tang gets virtually all the best lines, which you'll see in the quotes below, that show off not just her funny side but her heartfelt side as well. Like any Pixar movie, I'm expecting a healthy mix of both laughs and tears in Finding Dory, so seeing what types of humor and pathos Finding Nemo put out there should help mentally prepare fans for what is sure to be an emotional roller coaster in the new film. So check out these quotes from Finding Nemo and get ready for Finding Dory.

Dory's memory issues don't do her any favors when it comes to the game of "I Spy." In one of the funniest scenes in the film, Dory and Marlin pass the time by playing a few rounds of the game, and the little orange clown fish ends up being the object that Dory spies. Every. Single. Time.

Jellyfish are scary and dangerous... for the most part. Then there's Squishy. A teeny, tiny, adorable jellyfish, Dory can't help but give the creature a cute nickname while planning to adopt it as her pet. We really wish she'd been able to keep "her Squishy."

Crush doesn't like to be called Mr. Turtle, presumably because it makes him feel like an old man (to be fair, he is over 100 years old). And since Mr. Turtle is his dad's name, does that mean Crush's last name is Turtle? Do all turtles share that name, or just Crush's family? So many questions. Thankfully, Crush is definitely coming back for the sequel, so maybe he'll bring some answers, dude.

4. "When life gets you down, you know what you gotta do? Just keep swimming." — Dory

If there is one quote that defines Dory, this is it. It's also a good mantra to live by in real life. When times are tough and you feel like there's no way out, just keep moving forward. You'll get through it eventually. Who ever thought a memory-challenged blue tang could be so wise?

The address of the dentist's office where Nemo ends up is a clue that helps immensely during Marlin's journey. A Buzzfeed reporter found out that this exact street address doesn't exist in the city of Sydney, but it'll be burned into the minds of Disney fans forever.

Marlin has a pretty tough time getting close to anyone, which is bound to happen after the tragedy that befell his family. But his experience in the first film clearly helped him get over his complicated feelings for Dory, because in the sequel since he goes on a search for her.

It's got to be tough being a squid when all of your friends are fish. Thankfully, Nemo and company don't seem to mind too much when Pearl does the squid equivalent of soiling herself in public. Way to go, Nemo and friends!

This line was part of Dory's memorable introduction, when she flips out on Marlin for following her after she'd already introduced herself to him due to her memory troubles. Hopefully the new characters in Finding Dory receive an equally great treatment.

Dory may have some issues with her memory, but she's still a capable individual with plenty of other skills that make up for it. She's great with people (well, sea creatures), she speaks whale, and she can even read! This fish is full of surprises.

With the line that (probably) inspired countless pescatarians to turn vegan, Bruce instantly became one of the most iconic movie sharks in Hollywood history. He ranks right up there with the shark from Jaws, who also goes by Bruce. Wait... are they the same shark? Does Bruce think fish aren't food because he eats people instead? Wow, this got dark fast.

Dory and Marlin cheat death loads of times during their search for Nemo. They run across a swarm of Jellyfish, some scary sharks, and one very toothy angler fish. But through it all, Dory maintains her positive outlook. We should all be so lucky to have a friend like Dory.

Remember when everyone was yelling this all the time? It was like the "Run, Forrest, Run!" of 2003. And even though this movie came out well over a decade ago, admit it: you still yell this every time you see a seagull in real life.

13. "Nemo, newcomer of orange and white, you have been called forth to the summit of Mt. Wannahockaloogie to join with us in the fraternal bonds of tankhood!" — Jacques

Jacques and his accent add a layer of formality to the community Nemo finds himself in after he's taken. Fortunately, he's immediately welcomed in by the rest of the residents of Dr. Sherman's tank, who are working on an elaborate escape plan.

One of several jokes in the film that's aimed more at adults than kids, Dory insists that blue is her natural hair, er, scale color. Ah, nobody hides adult jokes in a supposedly children's movie quite like Pixar.

This line comes at one of the film's most hard-hitting emotional moments, when Marlin contemplates striking out on his own. The fact that Dory is able to remember how much he means to her, in spite of her memory issues, is a testament to both their friendship and the effect that Marlin has on her.

The line that inspired the sequel. It's wild to think that a throwaway joke line like this was able to then turn into an entirely new film, but that's what happened. It just goes to show you that when it comes to Pixar movies, every line — no matter how insignificant it may seem at the time — has the potential for greatness.

After reading these Finding Nemo quotes, you should be more excited than ever for Finding Dory. Now good luck not shouting "Mine!" all the time again like it's the early 2000s.

This article was originally published on June 15, 2016