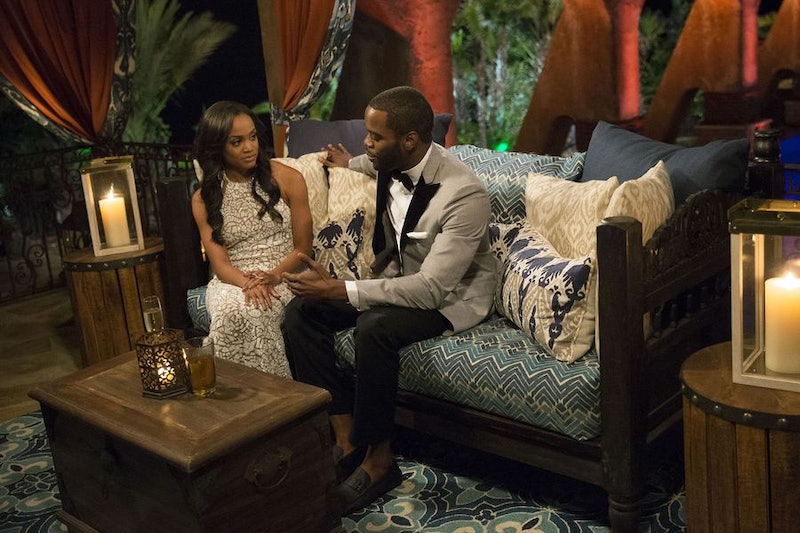 As if you needed more proof that she's the best, Rachel Lindsay is back to work post-Bachelorette. The Dallas native took time away from her career as an attorney to film, but she's back. According to Lindsay's Instagram story, she returned to work on June 1. And in case you're worried that she's bummed about it, the smile on her face should be all you need to convince you otherwise. Sporting a killer new hairstyle, the 31 year old grins into the camera behind her desk with four of what I presume are her coworkers tagged in the background. If you're new to the franchise, you might be wondering why you should care. So, let me just tell you that this is a very big deal in Bachelor Nation.

No matter what type of career you enter the franchise with, it's very rare to return to it once your time on the show is over. And high-powered jobs like Lindsay's, as a civil defense litigation attorney, aren't immune. In fact, you only have to go back three seasons to find a fellow Bachelorette alum who left her legal career behind post-show. Andi Dorfman was an assistant district attorney in Atlanta before joining Juan Pablo Galavis' season of The Bachelor, but chose to quit her job after filming her own season of The Bachelorette.

And she's far from alone. One of the hallmarks of the show is that its stars seldom maintain the same career trajectory before and after. Whatever it is that's on the chyron on Night One — those are the superimposed captions that share a contestant's age and occupation — is usually outdated by the finale. Take the most recent Bachelor and Bachelorettes, for example. When we first met Nick Viall, it was as a software sales executive on Dorfman's season of The Bachelorette. But four turns through the franchise later, you'd be hard-pressed to refer to him as anything other than a reality star or a television personality.

The situation is similar with Ben Higgins, who entered Kaitlyn Bristowe's season as a software salesman, but didn't seem to be doing much selling on his own spinoff, Happily Ever After? And speaking of the 31-year old Canadian, Bristowe seems to have had a bit of a career interruption herself. She was a dance and spin class instructor in her life before The Bachelorette, but her social media shows no indication that she's led any classes of late. Real Estate Developer JoJo Fletcher is a notable exception, as her pre-show title still technically applies to the work she does now. Her Instagram lately has shown the former Bachelorette has gotten back to flipping houses post-show, alongside her fiancé, Jordan Rodgers.

But, to be fair, that's a much more independent, freelance type of job. It's a less traditional way of earning a living that doesn't require you to return to the world of us normals after a taste of fame. Those Bachelors and Bachelorettes who once had to show up to an office every day have largely taken their lives in a different direction after their seasons aired. Whether you go on for the #wrongreasons or #rightreasons, the show undeniably boosts your profile, until many contestants — even non-winners — can survive off of paid appearances and social media promotions.

All of which is what makes Lindsay's return to her pre-show career so interesting. I have no doubt that she could make a living from here on out without ever returning to the law, so the fact that she has is proof that she loves it. Not to mention, the fact that she was welcomed back after two seasons-worth of absence proves that she's pretty dang good at what she does. Lindsay began the show looking for a better work-life balance, and, with the reports that she's happily engaged, I'm thrilled to say that it looks like she's well on her way to finding it.