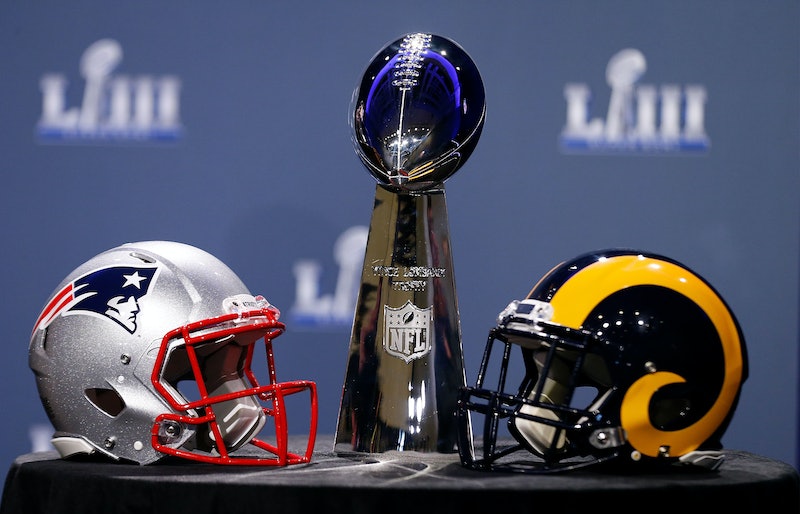 Super Bowl 2019 weekend is officially upon us, which that means watching Tom Brady play on Super Bowl Sunday for the ninth time in nearly 20 years. The New England Patriots will face off against the Los Angeles Rams this year in Super Bowl LIII at Mercedes-Benz Stadium in Atlanta, GA. Brady fan or not, everyone’s sure to be hanging out this Sunday with their squad — even if they're really just there for the chips and the guac. Super Bowl Sunday is a favorite holiday for so many Americans, and what’s not to love? The parties are wild, there’s good food (if you're rooting for The Patriots, try these themed food and drink ideas), good beer (did you know Americans consume 325.5 million gallons of beer for the Super Bowl?), a charitable halftime show with Travis Scott, and of course, hilarious Super Bowl commercials.

That means your social media feed is sure to be blowing up all day long as everyone gears up for the big game. People will be posting everything from game time updates and noteworthy moments from the halftime show, to funny memes, game-related GIFs, and squad pics repping their favorite team or ones repping the impressive game-day spread at their party. In fact, during the 2017 Super Bowl, 44 million people posted on Instagram and interacted 150 million times, according to Facebook. This means that everyone’s online, and it’s the perfect time to post a pic of you and your squad.

Whether you’re at a Super Bowl party for the beer, the instant pot dishes, the Instagram pics, or the actual game, you'll definitely need the perfect caption for your game day pic. After all, you'll want it to stand out from the crowd. So get your jerseys, food, and game-day poses ready, here are 18 hilarious captions to post alongside your 2019 Super Bowl Insta — pun(t)s intended.

1. “My anaconda don’t want none unless you got punts hon”

9. Got those Super Bowl Sunday Scaries

11. “I can’t really see another squad tryna cross us” - Drake

If you're honestly just there for the food:

There you have it — whether you're rooting for The Patriots, The Rams, or more guac, these 18 punny captions will add some laughter to a truly ~winning~ Insta pic of your Super Bowl Sunday.