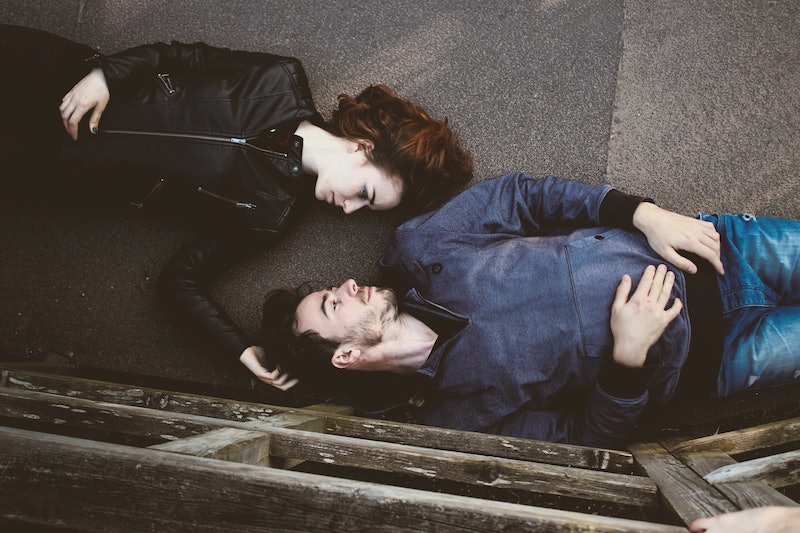 People go on and on about high divorce rates, and how nobody stays together any more. And you know what? It's kind of true. I'll spare you all the boring statistics, but marriages seem to break up so often these days, it can leave you wondering what, if anything, increases your chances of divorce. Or, if it's even worth tying the knot in the first place.

The latter is up to you, of course, but I can help shine some light on which issues are most likely to lead to a breakup. As it turns out, one of the biggest issues is expecting too much of your partner. "Couples have very high expectations of what marriage should provide for them: a companion, a lover, a best friend, validator, protector, mind reader, healer, interpreter," relationship counselor Julienne B. Derichs, LCPC tells Bustle. If you expect your partner to be all of these things and more, it kind of sets off a chain reaction that often ends in divorce.

Same goes for giving up early, which Derichs tells me happens all too often. "Marriage is seen as disposable," she says. But this completely discounts what marriage is all about. Barring truly toxic or abusive situations — which you should leave, as soon as you can — marriage takes a lot of work, and a lot of effort. That means navigating all the pitfalls, sticking it out, and avoiding mistakes whenever you can. Here are some situations that can lead to divorce, or at least increase your odds that things won't work out.

1. Focusing Too Much On Your Social Media Accounts

Of course it's fun to post cute couple-y photos online. But if this is the base upon which your marriage is built, good luck. "When people find themselves investing more time and energy in their social media content than their marriage, you have a problem," says Dr. Jill Murray and Adam Dodge, co-authors of The Empowered Woman's Guide To Divorce. "That effort is better spent working on the relationship."

If you two don't take time to practice self-care, it will lead to problems down the road. "Many people believe that marriage means they become one person: they should like and agree with the other person’s taste in music, entertainment, political beliefs, etc.," Murray and Dodge say. "What happens when that is a belief is ... one or both partners lose their sense of self, their individuality that brought them together disappears and resentment, hostility, and passive-aggressiveness builds." And that mindset can tear you two apart.

3. Not Creating A Family Budget

Money issues play a major role in divorce, so make sure you're both on the same financial page from the start. "A couple needs to share financial expenses," says licensed professional counselor Patricia Bubash, MEd. "It is a matter of sharing the responsibility of the finances of the home, and not allowing one person to make all the monetary decisions." Doing so can lead to stress and arguments, and that can lead to divorce.

4. Focusing Too Much On Your Careers

While it's perfectly possible to give equal attention to your career and your relationship, so many couples can't find that balance. "When couples are under so much pressure, they do not take time to relate to each other, spend leisure time together, or create time for just the two of them," says Bubash. "When down time and fun time is not set aside, a couple loses compatibility."

While you obviously want to avoid abusive situations, as well as 24/7 fighting, being in a relationship where there are zero arguments is actually far from healthy. "Fighting is never fun but couples that avoid dealing with issues in order to keep the peace are actually doing themselves a disservice," NYC-based therapist Kimberly Hershenson, LMSW tells Bustle. "The only way things can change and get better are if they are discussed." And sometimes that means a fight or two.

6. Missing The "Big" Moments In Life

As a married couple, you'll have to weather all sorts of harrowing life experiences, like deaths and illnesses. If one or both of you doesn't show up to support the other through these tough times, it can create a rift. "If a spouse isn’t there, there is a huge breech of trust," says marriage therapist Caroline Madden, PhD. "Many clients said that 'something broke' when they thought their spouse would be there for them, but wasn’t."

While this might sound like a good thing, it actually can destroy a relationship. "Raising kids is the ultimate responsibly, but you’ve also made a lifelong commitment to your partner and the two may not always jive," says licensed therapist Dana Czachorowski, MA, LAC. "You have to make time to be a couple."

8. Getting Stuck In A Routine

While a comfy routine is one of the best things about a stable relationship, it is possible to go a bit overboard and cross into the realm of soul-crushing sameness. "Variety is the spice of life and doing the same thing day in day out can lead to boredom," says love psychic reader Vaishali Nikhade. "This can escalate to taking things for granted and [one] or both people trying to find some 'spice' outside their marriage. It's important to shake up the routine once in a while and make time for enjoying different things."

9. Failing To Notice The Little Things

While this likely won't lead to divorce, it can be the last straw in many situations. "When we fail to notice the everyday small acts of kindness we used to cherish, [that's] the biggest sign of a failing relationship," says author and relationship expert Lisa Orban. This is a sign you're both taking each other for granted, and it can become a major source of unhappiness.

10. Being Immature And Unrealistic

Marriage is kind of a big deal, so going into it without fully understanding what you're signing up for can up your chances of divorce. "When someone has a fantasy about marriage, long-term relationship or happily ever after, they need to have a good dose of reality and be willing to work on the relationship," says spiritual counselor and psychic Davida Rappaport. "It is a trial and error thing and they will make mistakes. Without mistakes and the willingness to forgive and grow, the relationship will fall apart."

11. Having A Mental Illness

Sadly, an untreated mental illness can spell the end, too. "If you have a partner who suffers from anxiety, depression, or may have bipolar disorder, etc., your partner should be taking medication (if prescribed) or managing their health in a way that it is not destructive to the relationship," says Rappaport.

12. Letting Your Family Get In The Way

Of course you can love your family, and see them every day, if you so please. But at some point, you will have to branch out and create your own family with your spouse. As Valerie Tocci, a partner at SSL LP in New York City says, "Being too aligned with your family of origin is a relationship killer that I see a lot of in divorce situations. You have to remember that you chose your spouse to make a new family with and that means leaving your relationship with your parents and siblings behind."

14. Having Contempt For Each Other

It's OK to argue, and it's OK to dislike certain things about each other. But you shouldn't feel a sense of contempt. "This is actually the number one predictor of divorce, according to research by Drs. John & Julie Gottman," says counselor Heather Seguin, LMFT, CSAT. "Contempt is regarding your partner as inferior to you. It comes across in tone and body language more so than through words much of the time. It tells your partner, 'you're an idiot,' without actually using those words. When you don't respect your partner, you're headed for divorce."

15. Being A People Pleaser

While you certainly want to be kind to each other, having a "people pleasing" nature can cause problems. "People pleasing is inauthentic and will lead to resentment and passive-aggressiveness," says Seguin. "We all have needs and while sacrifice is part of a healthy relationship, when it becomes a way of life, you lose your personhood and end up getting those needs met in unhealthy or destructive ways.

16. Not Putting In The Work

You might think that, once you're married, all the hard work is over. But really, it's just begun. "Couples who are not willing to commit to the time and energy it takes to nurture a relationship often end up in divorce," says clinical psychologist Dr. Joshua Klapow. "There are always three key players in a successful marriage: individual one, individual two, and the relationship itself." If you aren't nurturing all three, things might not work out.

Of course this isn't true for every young couple, but some studies show it's not smart to get married before 23. "Recent research suggests that the longer couples wait to get married, the better their chances for marital success," says relationship expert Rhonda Milrad, LCSW. "It appears that if you get married before the age of 23, you are more likely to end up in divorce. This is likely due to the fact that you are more settled in your life, job, and education at 23 than when you are 18."

Another unhealthy fighting style is bickering, which should be avoided at all costs. "You have to be able to communicate your needs constructively and achieve a positive resolution," says matchmaker Susan Trombetti, in an email to Bustle. "When you fight to destroy, that creates other problems. Don’t fight and bicker until there is no good will left in the relationship."

If you're waking up just as your partner gets home from an overnight shift, and this goes on for forever, it can take a toll. "Passing like two ships in the night is a bad habit," Trombetti says. "Keep that up and you lose the love."

As I said above, it's important for a married couple to create their own family vibes, and this includes establishing your own rituals. "Rituals that a couple share are once again important to maintain, which comes with time spent and a bond that is fostered," Trombetti says. Even if this just means having a movie night on Fridays, "it lets you know that your partner has your back and is there for you. You will soon become nothing more than roommates if you lose this habit."

Keep an eye out for these signs, and if you notice them, start steering your marriage in a healthier direction. Sometimes all it takes is awareness, and some effort, to keep a couple together.

More like this
Emily Ratajkowski & Pete Davidson's Astrological Compatibility, Revealed
By Nina Kahn
Bumble's "Compliments" Feature Lets You Message Before You Match
By Lexi Inks
15 Ways To Deal With A Toxic Family During The Holidays
By Gabrielle Moss and Carolyn Steber
Here's How To Support Jewish People Amid Rising Antisemitism
By Hannah Orenstein
Get Even More From Bustle — Sign Up For The Newsletter