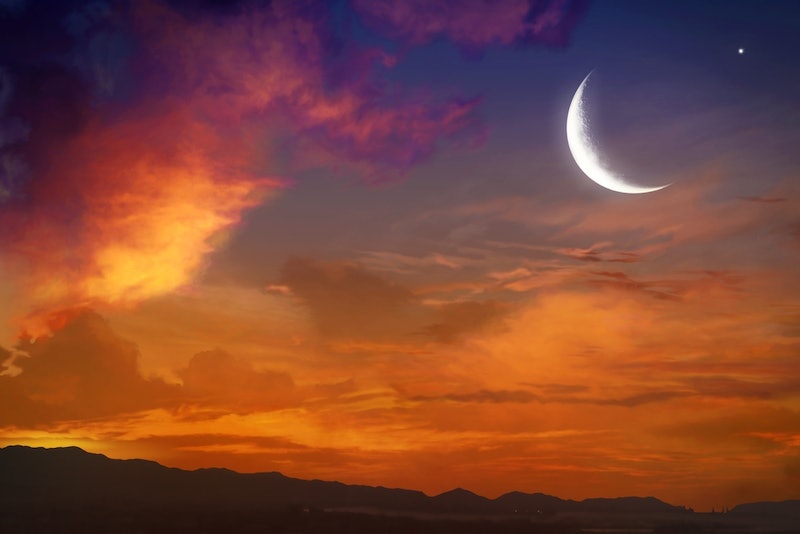 If you feel like the last few weeks have been all about a time of major changes, plenty of new beginnings, and lots of goodbyes, you aren't wrong: between the Spring Equinox and the beginning of Aries season, things have definitely been shaken up for everyone lately. It doesn't seem like that's ending any time soon, either. On Apr. 5, the Aries New Moon will rise, and it brings about some change and fresh starts as well - along with the confidence you need for these types of challenges. While it will affect everyone, it will be slightly different for each zodiac sign, and some won't be affected as much as others. We have the details on which zodiac signs the Aries New Moon will affect the least, and you probably want to know if that includes you.

Bustle spoke with astrologer Lisa Stardust, who explained, "The Aries New Moon will push us all to change our core beliefs. We may be met with resistance, but with perseverance we can grow into the best version of ourselves." Because the New Moon is the beginning of a new lunar cycle, it will always inspire us to do something new - but that kind of energy is even more intense with the Aries influence. That's because Aries is a bold, fiery sign with all of the confidence you could need, and it's going to rub off on pretty much everyone. Aries is a sign that knows what it wants, and doesn't want to wait for it. They go after things, and you'll find that you may want to do that as well during this New Moon.

Aries is a sign that is known for courage, impulsiveness, and outgoing energy. An Aries is not timid or meek, or scared to go out on a limb and try something totally different. We're all going to feel motivated to make a change... but at the same time, that intensity will be different for everyone, and that can depend on your zodiac sign. Every sign will feel something, of course (it's almost impossible not to during a powerful moon cycle!), but some will have things a little more chill, and that's not always a bad thing. Below are the four signs that will be the least affected by the Aries New Moon: