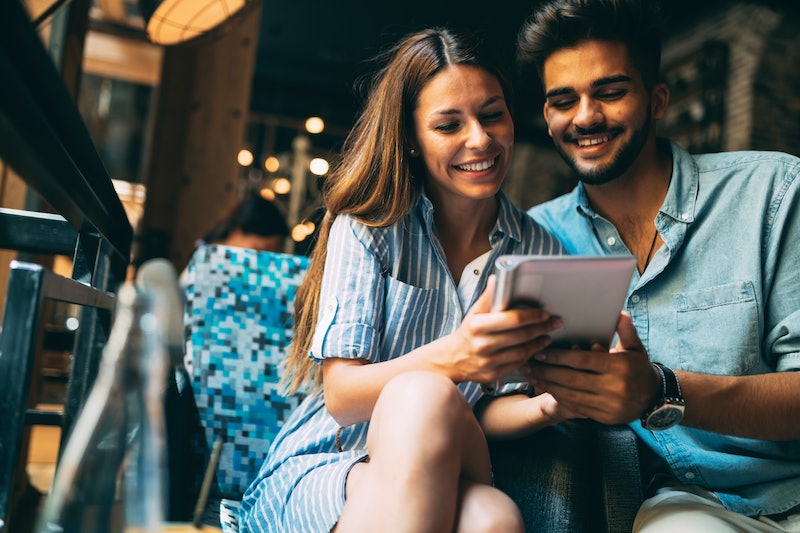 Finding a suitable cuff for cuffing season is no simple task, but this year, it's become all the more complicated thanks to the fact that Mercury retrograde November 2019 is raging on through the majority of November, aka prime cuff-up time. Does this mean that any zodiac signs dating during Mercury retrograde will end in disaster? Well, here's the deal: Mercury began its final retrograde jaunt of the year on Halloween, and won't go direct again until Nov. 20 (at which point we'll still have to suffer through it's post-shadow-period for two whole weeks more). While Mercury isn't necessarily one of the love and romance planets, it certainly affects dating and relationships — so yes, if you're single, its retrograde antics have the potential to throw a major wrench in your cuffing season plans.

In astrology, the planet Mercury rules over things like intellect, communication, scheduling and timing, and technology, so when the planet embarks on one of its dreaded retrograde periods (as it does 3-4 times per year), it turns our ability to properly function in those areas into the mental equivalent of a spilled pumpkin spice latte: Useless and a major bummer. Things like sending a text to the wrong person, mishearing where or when you're supposed to meet a date, accidentally swiping right on Tinder when you definitely meant to swipe left, and overall struggling to communicate your thoughts and feelings clearly are just a few of the to-be-expected types of mishaps that could go down during this transit.

But not all hope of an autumnal romance is lost, lovebirds. Bustle chatted with astrologer Lisa Stardust to get the cuffing season scoop. "Mercury retrograde won’t interfere with some sun signs' cuffing season," she shares. "In fact, it will make them more aware of who and what they want to commit to." This Mercury retrograde is taking place in the intense, deep, and emotional sign of Scorpio — meaning our most private, personal, and intimate matters are on the chopping block. While this could result in some difficult truths and personal crises surfacing for some, for others, it may simply help them cut through the B.S. to more clearly see what type of person they feel safe being more vulnerable with.

Since we're talking about ~love and romance~ through the remainder of this Mercury retrograde period, I'd be remiss to not cover what Miss Venus is up to. Venus, planet of love, will be in Sagittarius for the rest of the time that Mercury is retrograde (and then some) — which, despite Mercury's current antics, is actually great for your dating life (or for spicing up an already-cuffed-up relationship). Venus in Sag wants love to feel like an adventure and may not be satisfied with the typical cuffing season Netflix and chill sessions. This means that now's a great time to date people from different walks of life, say yes to spontaneous adventures, and come up with interesting new date ideas. Think going out to eat at exotic restaurants, visiting art museums or community lectures, driving out of town for the night to catch an event, or doing a fun activity like riding go-karts, hitting an amusement park, or trying an outdoor sport.

There are definitely a few signs who should avoid cuffing season during Mercury retrograde this year, as they're more likely to run into astrological snags — but that's certainly not the case for everyone. There are actually some zodiac signs who should date during this Mercury retrograde cuffing season, as their charts won't be hit as hard in the love department with the current Mercurial drama.

Communication has a tendency to get really messy during retrograde periods — and with this one taking place in emotional Scorpio, it's easy for things to get intense really quickly if you find yourself clicking with a new boo. "As long as you create boundaries, and stick to them, you will be able to partner up easily with someone new," shares Stardust. Emotional closeness doesn't pair well with poor communication, so as long as you're firm in your boundaries and remain able to state your needs, you'll have a successful season of cuffing.

Retrogrades are notorious for bringing exes and other ghosts from your past out of the woodwork — and in your case, Cancer, a former lover is likely to attempt to enter the picture. "An old flame may come back your way," warns Stardust. But just cause someone you once loved comes knockin' doesn't mean you need to answer the door. If you've got your eye on someone new, take a chance and pursue it, as Stardust encourages: "You can also ask out a person you’ve had a crush on — they will say yes!"

OK, Libra, we know how much you love to be in love, but that doesn't mean you should throw caution to the wind and dump your most intimate secrets and emotions into the hands of someone unworthy of the honor. "It’s important you don’t settle for scrubs now," warns Stardust. "If you keep your standards high, you’ll fall madly in love without a hitch." Mercury retrograde can easily cloud our thinking (and with Mercury rolling all the way back into your sign for a brief period this month, you'll feel it) — but stay focused on attaining the high-quality love you deserve.

While Mercury retrograde doesn't generally tip the odds in our favor when it comes to games of chance, your love life could benefit from a little adventure this season, Cap. "Ask your crew to set you up with a mutual friend," suggests Stardust. "Who knows? They may pick a winner for you!" Blind dates may not be your style, but with lovely Venus in happy-go-lucky Sagittarius all month, you'll feel inspired to overrule the retrograde drama with trust that a little risk-taking might offer a worthy pay-off.