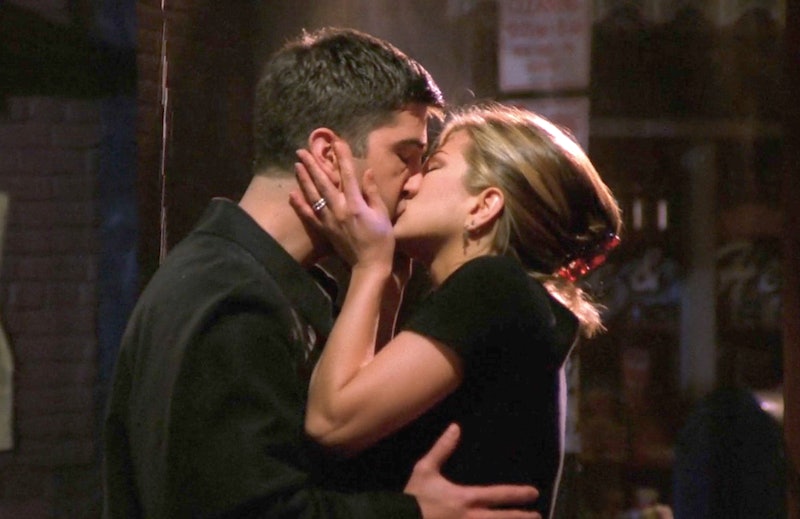 It's time to discuss all of the Friends moments no true fan will forget. "True fan" obviously refers to the viewers who reminisce often about the series as a whole, can quote an episode off the top of their head without error, and remember the smallest details. You know, as opposed to someone who has only seen the long-running comedy a handful of times — or happens to catch a rerun here and there on TBS.

But whether you're a huge fan or a casual fan, it's hard to believe it's been 23 years since Ross, Rachel, Chandler, Monica, Joey, and Phoebe first appeared on the small screen. Believe it or not, but, when it debuted, the comedy didn't exactly strike a chord with audiences or critics. It's always hard to predict how a series will fare, but, with Friends, well, it didn't have the greatest reviews initially. And now? The comedy is considered a fan-favorite and one of the best in the history of television. There is no discussing '90s pop culture without mentioning the group of six friends who seemed to spend more time drinking more coffee at Central Perk than actually working.

It's that one series many can relate to and rarely get sick of, so why not take a moment to walk down memory lane?

Not only is Joey's reaction unforgettable upon discovering Chandler and Monica's secret relationship, but the fact that it was the "stupid friend" who figured it out first made it all the more better.

2. Who Peed On Monica

Who knew Monica would one day end up marrying the man who peed on her in order to relieve the pain from her jellyfish sting?

There was a glimmer of hope for Ross and Rachel 'shippers when they went to the beach and shared a kiss. But it was Rachel's 18-page letter (front and back, mind you) and Ross' inability to admit he was wrong when they "were on a break" that dashed those dreams.

4. The Introduction Of Kip

No one ever wants to be a Kip, aka get "phased out" of their friend group.

A moment nobody could've predicted that turned out to be the right move for both Chandler and Monica.

Go ahead and try to pretend you don't say "gum would be perfection" every time someone asks if you'd like a piece or that you don't try to talk like Chandler on the phone when he's trying to be all coy about Jill Goodacre.

7. Ross Under The Influence

As most die-hard fans know, this is the first time Ross confesses his feelings for Rachel to Rachel.

Even though they didn't play their ER characters, George Clooney and Noah Wyle's cameos were on point.

Lobsters were never seen the same way again after this episode that finally put Ross and Rachel together.

Ross and Rachel's first time having sex was made memorable thanks to that juice box. Yeah, you know what that means.

"Could I be wearing anymore clothes?" is something every Friends fan now says whenever they bundle up during cold weather.

The one episode most viewers dread watching — or just skip over.

Basically the best "three-fold" punishment ever.

Forget about Phoebe getting pregnant in this episode, because Monica and Rachel losing their apartment to Joey and Chandler is all that really matters.

Further footage of Ross trying so hard to impress a woman in a ridiculous way. But how can you not find pleasure in his poor rugby skills?

An awful moment for Emily, but, really, did anyone want Ross to end up with her?

Do you remember why Phoebe chose Chandler as the name for one of Frank and Alice's triplets? Basically, Chandler's a genius and convinced everyone he hated his name, which made Phoebe feel so bad she chose his name over Joey's.

19. Everyone Finds Out, Minus Ross

To sum it up: "They don't know that we know they know we know."

There's nothing better than whenever they all tattled on one another.

Ross proved just how bad he was at flirting when he started talking about why gas smells the way it does.

Only Joey would try to save his sandwich over an actual friend during what he thought was a gunshot, but was actually a car backfiring.

Yeah, it's too bad Joey didn't make it big in Vegas when he found his "identical hand twin." He had a song ready and everything.

The only way anyone should ever run.

Yeah, they're both pretty bad.

They always did know how to reveal each other's secrets.

You almost don't want to watch because it's so embarrassing, but how can you not?

Chandler is basically anyone who thinks they take bad pictures.

Raise your hand if, whenever you make chocolate chip cookies, you pronounce it in "French" like Phoebe? Same.

31. Cheesecake Off The Floor

Six words: When Joey pulled out a fork.

It's totally OK for two guys to take a nap together, even if Joey and Ross (who totally loved every minute of it) didn't think it was.

Rachel definitely played it cool when Phoebe found a pregnancy test and automatically assumed it was Monica who was pregnant.

It was an ugly sweater, but it also unmasked the father of Rachel's baby.

Has anybody tried this, and, if so, does it work?

They may no longer be married, but Brad Pitt's guest appearance next to his then wife, Aniston, made for all kinds of very funny moments.

A ridiculously confusing game that Joey somewhat made sense of.

Let's be honest, anyone who is nervous about playing Pyramid could easily end up answering like Joey.

Some might think Joey and Rachel made more sense than Ross and Rachel, but Ross being "fine" so wasn't "fine".

Phoebe once mugging Ross may have been traumatic for Ross, but it was entertaining for viewers.

Yep, his middle name was Muriel.

42. Monica & Chandler Get The Call

When Monica and Chandler finally learned they were going to adopt a baby in the middle of their disastrous Thanksgiving, well, it was hard not to be happy.

This moment is self-explanatory.

It may have turned out to be the worst birthday party ever, but Emma's cake made up for it all.

Monica learning her "first kiss ever" was with her brother is so awful, but oh so funny.

Ross' bagpipes are pretty memorable, but it's Jennifer Aniston holding back laughter that fans will never forget.

It was something when Rachel learned about Ross' feelings for her, but when Ross discovered Rachel also had feelings for him? Best. Moment. Ever.

Whether you wanted them to be together or not, there's no denying that they had an epic first kiss.

The one moment everyone didn't want to come, but couldn't avoid.

These were only just a few of the many, many great moments that you discover as you watch and re-watch one of the best comedies to ever air on television.