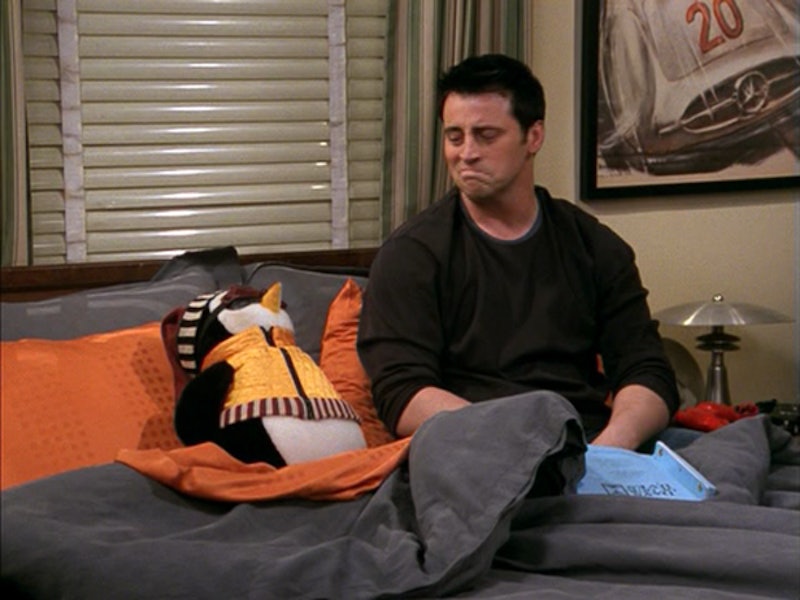 Having Friends on Netflix is the gift from the TV gods that just keeps on giving. Since the show landed on the streaming site, fans have been discovering all kinds of cool things, like the beloved orange couch boasting a reserved sign. Now a sharp-eyed fan named Casey has uncovered another Friends moment you missed: the time Matt LeBlanc completely broke character and had a giggle fit.

The episode in question is Season 4's "The One With the Worst Best Man Ever." You remember, Ross chooses Joey to be his best man and then instantly regrets his decision when his wedding ring goes missing at the raucous bachelor party Joey throws. Ross believes the stripper Joey hired stole the ring and he confronts her in a scene that is both funny and The Office level awkward. If you watch the scene closely, LeBlanc cannot keep it together and he dives behind Matthew Perry in an attempt to hide his laughter. Watch the moment in all of its glory below.

If you love older sitcoms like I Love Lucy, you have no doubt seen an actor completely break character because whatever was going on around them was too perfect not to laugh. These moments are always fun, and let's be real, one of the best reasons to watch SNL. It is way more rare to see actors break character on modern sitcoms because the episodes are thoroughly edited before they air, but it still happens sometimes. Knowing it happened on Friends just adds to the show's awesomeness.

And I know I am not alone in thinking "Joey" diving behind "Chandler" to hide his giggles makes the whole scene even better. What are best friends for if not to keep you from ruining a scene? This little moment of genuine hilarity is just one more easter egg to add to Friends ' legacy as one of TV's best sitcoms.

Having Friends on Netflix has allowed fans to see so many things they missed the first (or third) time around. From the mysterious case of the impostor Rachel to Joey's unscripted giggles, Friends still has so many secrets. Joey's laugh attack is just further proof that this show will never get old.

More like this
David Schwimmer Doesn't Remember This Classic 'Friends' Episode
By Sam Ramsden
The 'Hocus Pocus' Sequel Finally Has A Release Date & It Makes Total Sense
By Shannon Barbour and Radhika Menon
Hayden Panettiere Will Return For 'Scream 6': "We F*cking Won, Scream Fam"
By Jack Irvin and Jake Viswanath
'Derry Girls' Sister Michael Isn’t As Fictional As You Might Think
By Olivia-Anne Cleary
Get Even More From Bustle — Sign Up For The Newsletter