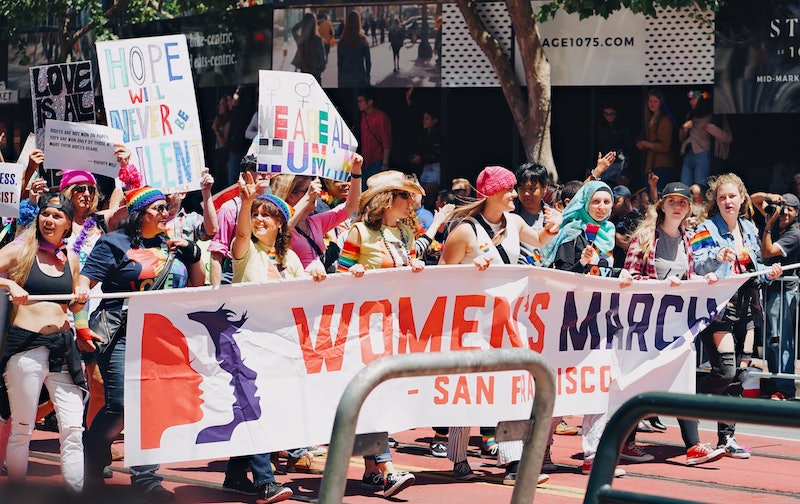 I think it’s fair to say, in general, that feminists like to talk about feminism — because, when your advocating for equal rights for all and trying to dismantle centuries of systemic gender inequality, there’s an awful lot to say. But there are some arguments that feminists are tired of having. Or at least that I, as a feminist individual, am tired of having. More than tired. Exhausted.

These arguments have been happening for decades and they should keep happening because, to put it mildly, this sh*t is complicated. The object of feminism is simple (the “economic, political, and social equality of the sexes,” thanks Merriam Webster), but the execution of that goal is anything but. There needs to be ongoing, attentive conversation about how feminism approaches the complexity of human identity and experience and how to move forward in ways that are inclusive and effective.

But then there are other arguments that inevitably pop up over and over and over that make me think, “This again?” Often rooted in false stereotypes and misreadings of the basic meaning of feminism, these are debates that will not die. I can’t speak for all feminists (nor do I want to), but these are a few of the debates about feminism that I, a feminist human, am tired of having:

1. Being a feminist does not mean you hate men.

“Feminism is anti-men” is probably the most prevalent stereotype of feminism there is, and it’s false. As Bustle’s JR Thorpe has described, the stereotype that feminism is anti-male comes from a long history of anti-feminist activism bent on discrediting the women’s movement by portraying its supporters as unnatural, angry, hysterical, and ugly.

Are there feminists out there who hate men? Yes. I certainly don’t hate men (and, as far as I know, I’ve never met any feminists who do), but this is a big, crowded world we’re living in, and I’m sure there are people who both describe themselves as feminists and who claim to hate the entire male gender. And that sucks. But that bias against men isn’t embedded in feminism, which is about equality and improving women’s lives so that they can achieve equal rights and opportunities — not punishing or denigrating men.

2. Feminists are not campaigning for female supremacy or “special treatment” for women.

The point of feminism is not to create a matriarchal society in which men are servants to a female overlord (although... I would watch that movie). Feminism strives for equality — as in equal, as in the same amount — not more for one group of people and less for another. Trying to change a system that inherently privileges (white) (heterosexual) men to give other people equal rights doesn’t amount to “special treatment.” If women receiving equal pay, or women having an equal voice in government, or women having equal representation on screen signify “special treatment” to you, you might want to check your dictionary for the word “special.”

3. Feminists are not all the same, and they don’t all believe the same things.

In general, feminists agree on two things: 1) All people should have equal rights, regardless of gender. 2) Gender equality does not currently exist. Beyond that, feminists can disagree about… a lot of stuff, TBH. No one feminist speaks for all feminists.

All too often in internet debates about feminism (dangerous territory, I know), I see someone trot out a statement made by a person claiming to be a feminist that is anti-male, or hateful, or simply bizarre, and then the internet commenter says, “See?! This proves that I am right, and feminism hates men/hates women who shave their legs/hates stay-at-home-moms/hates puppies/etc. etc.” Nope. Being a feminist does not require that you agree with everything that every other feminist has ever said.

Men can be feminists. Of course they can. Being a feminist means supporting the equal rights and opportunities of everyone, regardless of gender, and there’s nothing to say that you have to be a woman to do that. Feminism benefits everyone — because everyone’s lives are better when people have full rights and opportunities — and it benefits men particularly by dismantling harmful social pressures that dictate that men and boys conform to extremely limited stereotypes of masculinity. Feminist men are able to recognize the ways that gender constructs impact their lives, acknowledge their own privilege in a system that has historically favored men, and listen — really listen — to what women have to say about their lives and experiences.

5. The idea that sexism is dead and now everything is perfect and we don’t need feminism anymore.

Look, not everyone has to embrace the word “feminist,” but to suggest that the fight for gender equality is simply unnecessary because sexism is gone and everyone is now on an even playing field, with equal rights and opportunities, is to ignore basic facts about the world we’re living in.

Women make up half of the population of the United States, and yet they sit in only 20 percent of the seats in Congress. Women make approximately 77 cents to every man’s dollar (and that number drops significantly for women of color). One in six women is a victim of sexual violence. Women make up less than a third of speaking roles on film, and less than a quarter of film industry positions. Women make up less than a quarter of U.S. STEM jobs. That’s only a few examples, and they don’t even begin to take into account the oppression and violence that many women face in other parts of the world. Conditions for women have improved greatly in the last century, but there’s still a long way to go before gender equality actually exists.