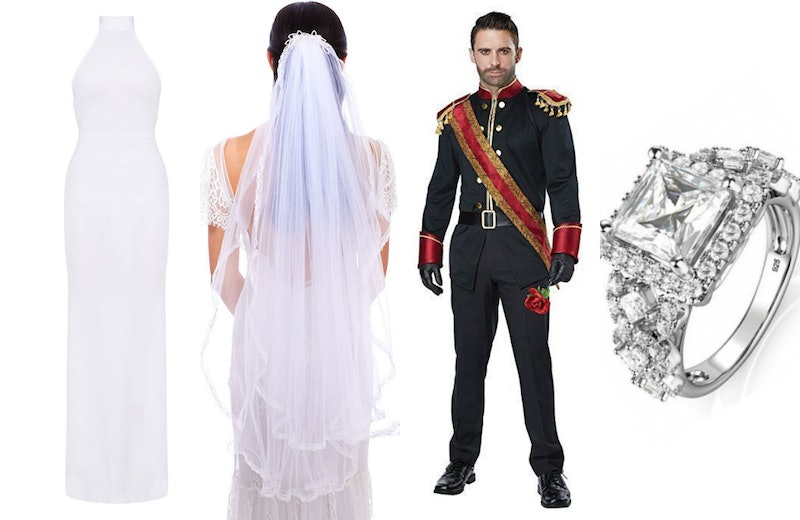 If you and your significant other are going for a couple's costume this Halloween, one very dignified option is to make things royal AF and dress as power couple Prince Harry and Meghan Markle, the now-Duke and Duchess of Sussex, respectively. The couple's royal wedding that took place in May 2018 was one of this year's major pop culture highlights, making a Meghan Markle and Prince Harry wedding Halloween couple costume a perfect and highly-relevant choice for any duo looking for an iconic and timely Halloween look.

Prince Harry and Markle's union was iconic in so many ways, and their royal wedding was one of the most unique the world has seen, as they combined longstanding traditions with their own personal and more modern views. For example, the wedding was multi-cultural, funny at moments, and the couple held hands throughout the ceremony (which typically isn't done). So it's no surprise that this royal union wasn't just an English obsession — 29 million Americans also reportedly watched the couple take their vows in May, so it was very much a transcontinental and iconic moment that translates perfectly to a couple's costume.

From the couple's official engagement announcement to their first appearance as a wedded couple, there is plenty of DIY Halloween costume inspiration to pull from. Here are a few easy-to-DIY Meghan Markle and Prince Harry wedding moments that will make amazing Halloween costumes for any couple.

An alternative to the above look: Make your Halloween costume a little more fun and whimsical with a slightly less formal twist on their classic outfits. A cute dress in a shorter cut for your Markle look plus a slightly-less-officially Prince Harry ensemble makes for a fun and cute twist on this classic moment.

After the party there's the after party — and after the royal wedding there's, well, the royal reception! Ditch the veil and military garb and prepare to let loose by replicating the couple's classy wedding reception looks.

The happy couple's first post-wedding appearance took place just three days after the royal festivities, where they reportedly attended a garden party at Buckingham Palace. Markle — who at this point was officially the Duchess of Sussex — donned a dusty pink pencil dress instead of her white wedding garb, and Prince Harry sported a bright blue tie. If the royal wedding was overplayed for you, capture the couple's post-wedding glow with royal garden party costumes instead.