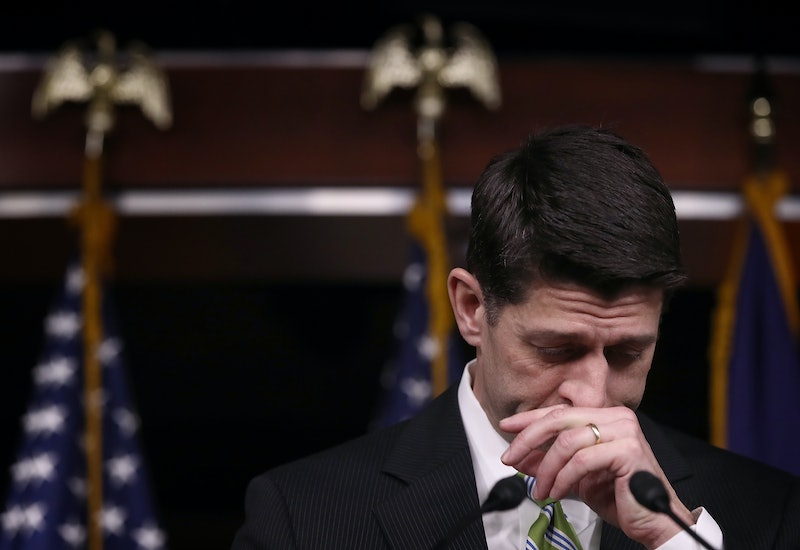 Throughout most of his campaign, Donald Trump vowed to repeal and replace Obamacare, and on Friday, March 24, the new proposed bill was schedule to be up for a vote in the House of Representatives at 3:30 p.m. But, it became clear that the bill was not going to pass and Trump directed House Republicans to kill the American Health Care Act before it had a chance to properly fail. While it is perfectly fine to celebrate this victory, this is hardly the end when it comes to resisting the Trump administration and their actions. To keep the fire burning, here are five ways that you can keep the momentum going after the AHCA was killed.

While, yes, the news of the AHCA failing is exciting now, there are still many opportunities for the Trump administration to impede on Americans' rights, and particularly, women's' reproductive rights. Unfortunately, we are all only in the first few months of a four-year presidency and these victories should also mark the start of further resistance and action.

Here are some ways that you can continue the fight in your day-to-day life, because no voice is too small.

1. Continue To Reach Out To State Representatives

It is state representative and senators' duties to listen to their constituents' voices. You can find your House representative's contact number here and your Senator's number here, or you can call 202-224-3121 and ask the operator to put you through to whoever you need to reach.

2. Make Sure To Refill & Get Any Contraceptive You Need

While the AHCA bill being struck down might keep women's reproductive rights safe for a while longer, women are still vulnerable to attacks on affordable birth control options. If you've been thinking about getting an IUD, for instance, now could be a great time. A great way to keep resisting is to get your sexual health care from Planned Parenthood, so you can support the organization, yourself, and women around the country all at once.

3. Donate To Opposition Groups You Believe In

You might feel overwhelmed at the idea of standing up to a president whose ideals you don't believe, but you can support and donate to organizations that you do believe in. Some organizations to begin with could include Planned Parenthood, the ACLU, NAACP, GLAAD, RAINN, and the Southern Poverty Law Center. Additional organizations can be viewed here.

The Women's March proved that millions of Americans are willing to take a stand against what they believe in, and it was largely against actions of the Trump administration. There are many upcoming marches planned, such as the March for Science and the Immigrants March, and even if you're not in a major city, you can partake in sister marches around the country.

Being that the AHCA bill would have been especially catastrophic for women across the country, now is the moment to really rally behind women's causes. Because Trump and his administration have proven to be a threat to freedom of press, it is important to uphold women's voices in media by supporting women-friendly outlets. As reported by Bustle previously, some options include, Bitch, Bust, Ms. Magazine and Top Rank Magazine.

While there are literally hundreds of other ways to continue the resistance, it's nice to know that just a series of small steps will undoubtedly lead you to be a part of something much larger than yourself.