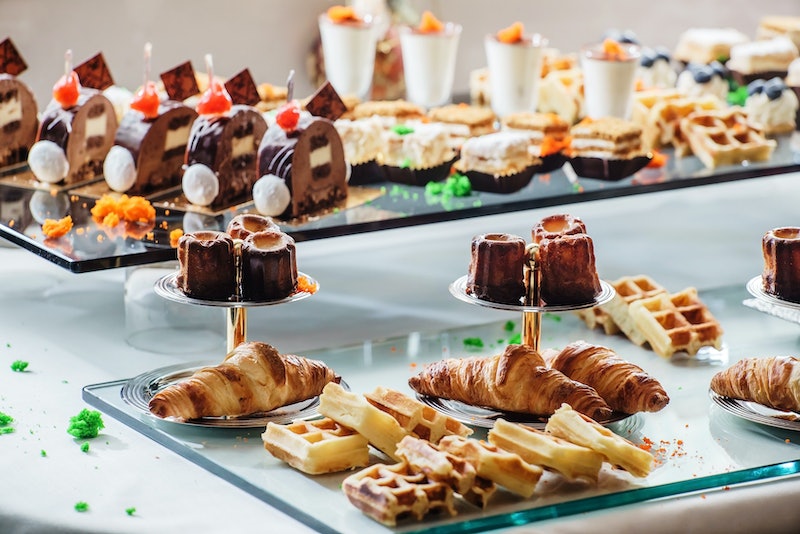 The sweaty armpits, frizzy hair, and overheated guests of the traditional summer wedding can kindly step aside — fall has taken over as *the* time to get married. In fact, according to a study by WeddingWire, 43% of weddings take place in late September through November, with the two most popular dates being in October. Considering the popularity of autumn nuptials, WeddingWire compiled the hottest fall wedding trends. It's safe to say cookie cutter weddings have waved bye-bye in favor of bouncy houses and breakfast instead of wedding cake.

Bear with me. We'll talk about it.

To be clear, there's nothing wrong with traditional. Your wedding is about what makes you and your partner happy, period. Here's the thing, though: we're learning that there's no one way to do a wedding. In fact, some people don't even want a wedding. Glamour said that for millennials in particular, eloping is the new wedding.

And then there's this: A 2015 article from Reuters referenced The Wedding Report and said that as of that year, three to four percent of marriages were courthouse and city hall ceremonies — up from two to three percent a couple years prior. I would bet a nickel that number is even higher now, and I am not the gambling type.

If you're planning on tying the knot when the leaves are crunchy and pumpkin spice is in the air, here are the wedding trends everyone is going crazy for, according to WeddingWire.

Orange You Glad It Isn't Pink?

It looks like millennial pink might have enjoyed its 15 minutes of fame, because orange has taken center stage. What better color to show off in fall weddings? Its popping up everywhere from wedding fashion to invites and florals — like this bouquet from ExpressionsByDecor on Etsy. Doesn't it remind you of the changing autumn foliage? Me too.

Forget brinner! We're talking about... bressert? Dreakfast? What's the breakfast/dessert hybrid name? Anywho, wedding cake alternatives have been a thing for a while, but newlyweds are taking it one step further — with mini breakfast treats, says WeddingWire. Think tiny pancakes and waffles on a stick that wedding guests can grab and go. Seriously delicious, and let's talk about how good these will look on Instagram.

We first discovered that bouncy castles were catching on back in May, probably a result of the royal wedding and us average peasants being like, "Well jeez, I want to have a royal wedding and become a duchess and have tea with the queen and make royal babies too." And then we had bouncy castles. They remind us of our childhoods and also serve as consolation because none of our children will ever be in line for the throne.

They're cheaper than flowers but just as versatile. That must be why balloons are turning up in flower walls (take that, Kim Kardashian), backdrops, and even floral arrangements. Plus, when the wedding is over, you can untie them and pinch the ends, and they make that funny whistling sound as they deflate.

WeddingWire points to parasols as the hot new wedding installation, and there's more where that came from. Fluorescent overhead lighting just doesn't cut it anymore, and people are starting to get extra daring with extreme ceiling florals. In fact, floral chandeliers started catching on toward the end of 2017.

Tradition has us throw rice at the newlyweds, and sparklers are also a common (and photogenic) choice. But WeddingWire says things are getting more personalized these days — like throwing paper airplanes for couples who dated long-distance, or ringing bicycle bells for lovebirds who are cyclists.

Trends aside, weddings are an expression of the couple getting hitched. Whether you embrace the season or head to the courthouse, make your special day about you. Cheers!