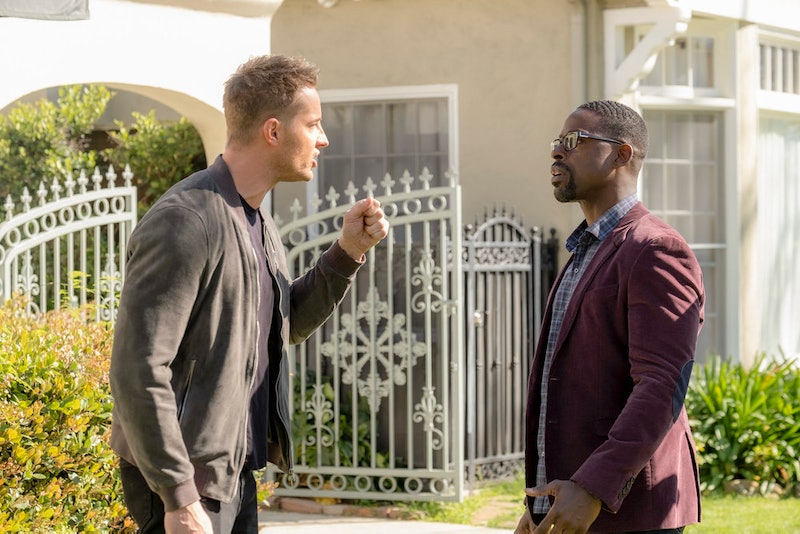 Warning: This Is Us Season 4 finale spoilers ahead! This Is Us fans may have finally discovered who becomes pregnant with Kevin's child (or rather, children — plural) as well as the cause behind Kevin and Randall's epic feud in the Season 4 finale. However, there are still plenty of questions that This Is Us Season 5 needs to answer in order to properly fill in the blanks of this complicated family dynamic. After all, it wouldn't be a true This Is Us finale without a couple of noteworthy cliffhangers to keep us theorizing all summer long.

For the most part, the hit series likes to play things pretty close to the vest, making a point to not ever give too much away or answering one question only to have five more pop up in its place. And while the coronavirus outbreak leaves the fate of This Is Us Season 5, and fall TV in general, somewhat up in the air — depending upon how soon production crews are able to get back to work safely — there were plenty of surprises throughout the Season 4 finale that are sure to keep fans busy until the Pearsons return.

Luckily, This Is Us has already been renewed for a fifth (and sixth) season, so this won't be the last we see of the show. But when it returns, This Is Us will have some serious explaining to do.

1. Do Kevin & Madison Get Married?

Madison may be the mother of Kevin's twins, but that doesn't necessarily mean she's the one he's engaged to and ultimately marries later on. (Future Kevin is shown rocking a wedding band, so wedding bells are definitely in his future.) When asked about Kevin's mystery fiancée, series creator Dan Fogelman told reporters, per The Hollywood Reporter, that "there's an immediate answer coming to all of that," though he also noted that there's "many more chapters in Kevin's romantic story."

Marrying Madison seems to make the most sense right now, given that they're about to share children together, but Fogelman's comments suggest Kevin's life could take yet another unexpected twist.

2. Why Is Nicky Wearing A Wedding Ring In The Flash-Forward?

In the last few moments of the finale, Nicky was shown once again at Rebecca's bedside several years into the future. But as he went to hug Kevin and Randall, fans caught a glimpse of a wedding ring on his finger. Is it possible that he's married to Rebecca in the future? Has her Alzheimer's caused her to think Nicky is actually Jack, and he's playing along so as to not make her relive the pain of Jack's death? It's a small detail, but one that could prove to be very significant down the line.

3. Why Is Madison's Doctor Important?

Throughout the episode, fans were shown a glimpse into the life of Madison's doctor. We know very little about him other than that he has a daughter named Sadie who shares his interest in training horses. So why include so much of his backstory? Fogelman told Deadline during a recent interview that the OBGYN will serve as a prominent part to the story going forward.

"The doctor becomes an important character next season to Kevin — he’s having twins with a virtual stranger, not a normal birth experience," Fogelman teased. "It’s no coincidence he was introduced in the same episode that Dr. K returned." Though in what way he proves to be important remains to be seen.

4. Where Is Kate In The Flash-Forward?

Toby has appeared prominently in the flash-forward (sans wedding ring) multiple times; however, Kate is nowhere to be found. Does this signify that she and Toby are divorced or at the very least separated? These two have already been through so much, it would be a shame to see their love story end in heartache.

Miguel is also absent in the flash-forward, and given Rebecca's declining health condition, that definitely raises some red flags. Did he die prior to this point in time? Did he and Rebecca end up separating? Is he keeping his distance in order to play along with the whole "Nicky is Jack" charade? We need answers ASAP!

The flash-forward showed Kevin tentatively placing his hand on Randall's shoulder, indicating that despite the hostile words that were spoken between the two of them in the present day timeline, they ultimately are able to mend their relationship. But how long does it take them to get there? That's a journey This Is Us is bound to explore next season, but considering the harsh words they exchanged, it's going to be a long road to recovery.

Fogelman has already written the Season 5 This Is Us premiere, so answers are sure to come, even if it takes a bit longer than usual.

More like this
Everything To Know About 'Only Murders In The Building' Season 3
By Gretchen Smail and Kadin Burnett
9 Time Catherine Cawood Was An Absolute Badass In Happy Valley
By Sophie McEvoy
'GoT' Star Emilia Clarke Says She "Just Can't" Watch 'House Of The Dragon'
By Brad Witter
This Dark 'Happy Valley' Theory Is Staring You Right In The Face
By Sophie McEvoy
Get Even More From Bustle — Sign Up For The Newsletter
From hair trends to relationship advice, our daily newsletter has everything you need to sound like a person who’s on TikTok, even if you aren’t.