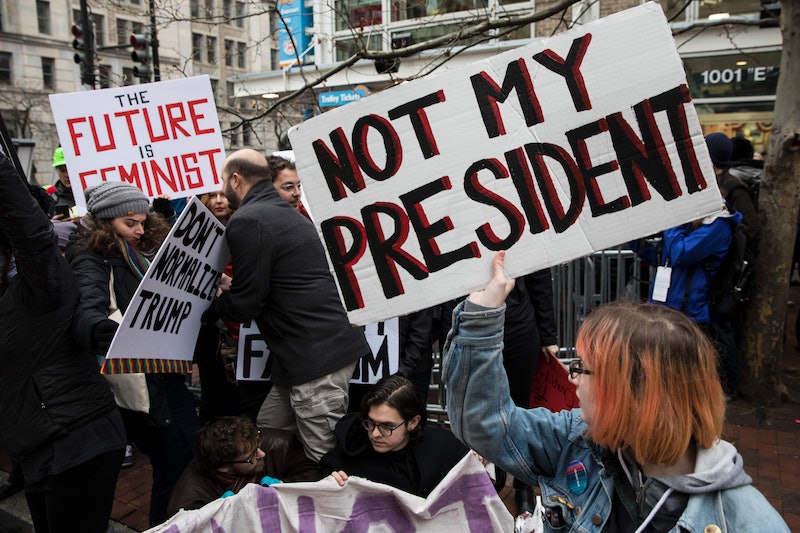 The time has come to march. Now that Donald Trump has been sworn in as the 45th President of the United States, people all over the country — and all over the world — are marching to make sure their voices are heard. If you've made the last-minute decision to attend the Women's March on Washington or one of the sister marches, you don't need an elaborate sign. These easy Women's March sign ideas still make an impact, and include a concise, yet powerful message.

You will see a vast array of signage and attire at every single march. Take it all in, because it will no doubt fuel your stamina throughout the long hours spent on your feet. And when you question your ability to keep going, keep in mind the actions of Hillary Clinton. Her stamina is unmatched. Her poise is unwavering. She is made of steel. But guess what? So are you.

I personally believe that we should continue this fight in her honor. She took us as far as she could, to make sure we have what we need, that our safety is valued, and that our neighbors of every race, ethnicity, and sexual orientation are protected. It's our turn now. Here are seven easy Women's March sign ideas you can make at the last minute.

For the people in the back, this is not locker room talk. A man who is now the leader of the free world once bragged about grabbing women "by the pussy." We should never forget that. And just because he's earned this prestigious title does not mean we'll allow that kind of predatory mindset to be normalized. We will fight back — with our voices, and our pussies.

We need to remind the world that equality for all does not mean oppression for those who were previously in power. It simply means equality for all. It's important, and we need to keep shouting it as loud as we can.

This is clearly a play on the legendary Regina George quote from Mean Girls, in which she chastises Gretchen for her use of "fetch." And you know what? It's perfect. Because as a nation, we are too progressive, too free-thinking, and too open-minded to allow hate to win this time.

So, Donald. Stop trying to make hate happen. It's not going to happen.

4. Refusal to Give Up

Remind the world that when it comes to injustice, you're not about to "get over it." Rebel against that notion with a sign that says you never, ever will.

She said this incredible line in 1995. It's still true today. And the fact that so many people still don't understand it is why we need to keep saying it.

When Trump stops threatening the safety and healthcare of over half the nation, maybe then we'll stop trying to stop him. But when he fails to protect his own people, he should be stopped.

This is where it all begins. This is the revolution, and it begins today. None of this has been normal, and the minute we start to normalize the things we've seen and heard from the new administration, that's the minute we lose the fight. Resist. And keep on resisting.