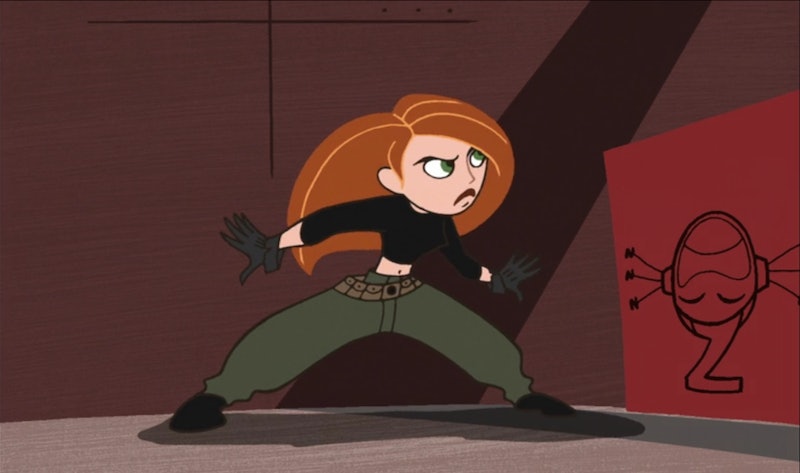 Never before has the theme song: "Call me, Beep me, If you want to reach me" been more relevant. And that's just one of the reasons Kim Possible is the Disney+ show you should be marathoning this week. With its perfect mix of teenage drama and crime-fighting shenanigans, there is no better distraction.

Kim Possible followed a teenage spy, as she balances high school and super secret missions with her far-less competent sidekick, Ron Stoppable, his pet naked mole-rat Rufus, and their computer scientist pal Wade. The show ran for four seasons from 2002-2007, and over the years Kim and Ron encounter super villains Dr. Drakken and Shego many times, as well as countless other enemies, foiling their plans to overtake the fictional town of Middleton, Colorado.

Millions of people are currently at home due to the coronavirus pandemic, and for anyone social-distancing for the past couple of weeks, boredom might be setting in. It seems like everyone is looking for the perfect show to escape into, and for most, the more nostalgic the better. There has literally never been a better time to catch up with Team Possible. Not only does the show send the characters on a unique, absurd mission every episode — from a mind-switching device to mutant camp counselors — it also has plenty of comedy and romance. Kim Possible has something to offer any viewer, new or old, so here's 7 of the biggest reasons to revisit this iconic series.

The Disney theme songs of the early aughts were unparalleled in their catchiness. It doesn't matter where or when there's trouble — the Kim Possible theme will put you in a better mood. Not to mention the fact that "Call Me, Beep Me" was performed by early 2000s pop darling, Christina Milian. So, what's the sitch?

2. Ron Stoppable Thinks You Should

Even this voice-actor from Kim Possible think fans should revisit the show. On Monday, Will Friedle, who voiced Ron Stoppable, tweeted his characters' catchphrase from Kim Possible, writing, "#KimPossible is trending? Boo-ya!" Clearly, he's sending us a coded message to log onto Disney+ stat!

Never forget that Ron Stoppable invented a perfect food — the naco. Served at the Bueno Nacho in Middleton, the "naco" was a combination of nachos and a taco. It is created by taking nachos, mixing them with taco filling, placing the whole thing in a tortilla, and lifting the food up like an edible bag. Basically, Ron made the perfect quarantine snack before it was cool.

4. 'Kim Possible' Was Ahead of Its Time

Kim Possible creators reportedly pitched the show in response to the lack of women-led action shows at the time. The fact that Kim Possible was the action-hero, and Ron Stoppable the bewildered sidekick, was meant to flip the script on conventional spy-thriller tropes, such as stories like James Bond. Christy Carlson Romano, who voiced Kim Possible, credited the character for inspiring and empowering her throughout her twenties, according to MTV.

Everyone loves an animal sidekick, but while other shows might have gone with a beloved dog or cat, in Kim Possible, it was a naked mole-rat. Even though he's unconventional, Rufus is undeniably adorable, and yet another reason to revisit the show. In fact, Kim Possible creators loved Rufus so much, they gave him his own theme song.

Even though Kim Possible was a great hero, many fans couldn't help but root for villain Shego, just a little bit. Not only was Shego a formidable foe for Kim, she was also kind of a fashion icon. From the green-jumpsuit to multiple turtle-neck moments, there's no Shego look that wasn't worth copying.

The most underrated member of Team Possible was Wade, resident computer scientist. Most people who grew up watching the show might remember Ron as a reliable sidekick. But Wade was the one who could "patch through an elite scientific team" for a satellite briefing, or who could give Kim some real talk about her bank account balance. Also, Wade was social-distancing before it was in, so he's never been more relevant.

The current moment likely has many viewers who grew up watching Disney wishing there was a Kim Possible to call or beep. Even though there isn't, catching up on Kim Possible on Disney+ this week might still make fans feel better.

More like this
The Banned 'Friends' Ad Shows Monica As You’ve Never Seen Her Before
By Sam Ramsden
Netflix Shut Down 'Bridgerton' S3 Rumours About A “Very Dark” Storyline
By Bustle
Ashton Kutcher Wants Danny Masterson “To Be Found Innocent” In Rape Retrial
By Jake Viswanath
All The ’70s Easter Eggs You Missed In 'That ’90s Show'
By Grace Wehniainen
Get Even More From Bustle — Sign Up For The Newsletter
From hair trends to relationship advice, our daily newsletter has everything you need to sound like a person who’s on TikTok, even if you aren’t.