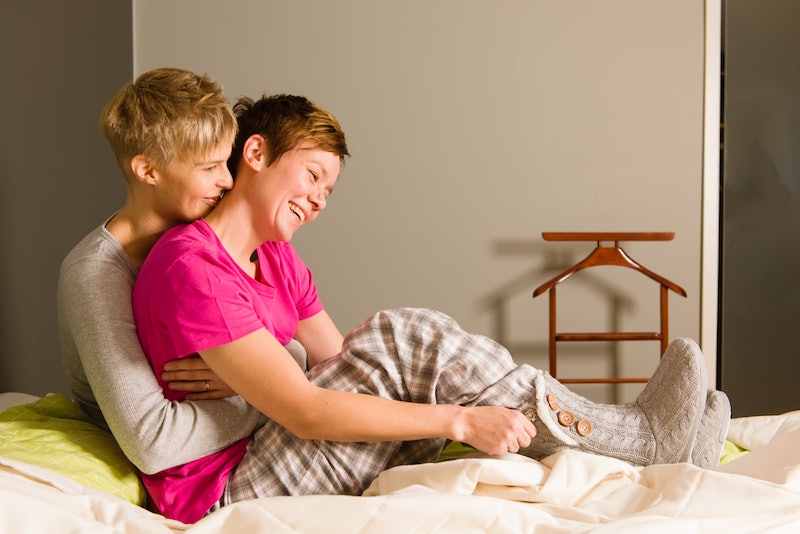 When it comes to saying those three little worlds, it's hard to pinpoint an exact, ideal timeframe. A 2011 study found that it takes people about 97 days, or three and a half months, on average to say “I love you" for the first time. But whether or not you fit into that window, it's safe to say that saying those words for the very first time can be a pretty big deal.

“The first person to say 'I love you' is putting themselves in a highly vulnerable position," matchmaker Joann Cohen, tells Bustle. "Even if you think for sure someone feels the same way, there is always the potential that they don’t." But what does it mean for your relationship if you're not the first one to say "I love you"?

Some experts say that the one who expresses their feelings first is seen as courageous for being vulnerable. According to Cohen, saying it first can give the other partner who hasn't said "I love you" the "power" in the relationship.

"Even if their partner feels the same, there is a chance that they aren’t ready to give their heart back," she says. "Those three words open up your heart and give the other person a key. Once you've said it, you can’t un-say it."

So here's what it means for your relationship if you weren't the first one to say "I love you," according to experts.

More like this
Are Quality Time & Physical Touch Love Languages Compatible?
By Lexi Inks
Is It A Rebound Relationship Or The Real Thing?
By Carolyn Steber and Lexi Inks
Cookie Jarring Is The Dating Term You Need To Know
By Sophie McEvoy
The Best Time To Date After A Breakup, According To Experts
By Bustle Editors
Get Even More From Bustle — Sign Up For The Newsletter