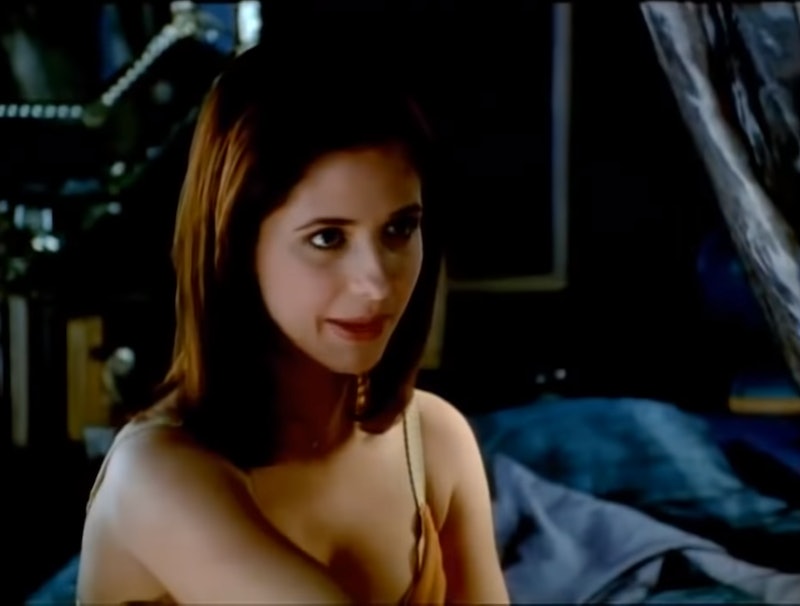 The year is 2019, but you probably still can't get over Sarah Michelle Gellar's epicness. From her countless roles as butt-kicking heroes, to her rare comedic turns, she's a multi-faceted actor with multiple iconic roles. Basically, she's done it all, but one of her best roles is still Cruel Intentions villainous Kathryn Merteuil. On March 5, the twisted tale of rich New York teens will turn 20 (yes, 20), and to celebrate, you need to revisit some of the greatest hits from Gellar's career so far.

The Cruel Intentions star has had a lot of roles, so it can be overwhelming to know where to start if you want your SMG fix. It's okay, though, I'm here to help. Figuring out what to watch if you love Sarah Michelle Gellar isn't as hard as it sounds. Odds are, you haven't seen everything she's been in, and you might not even know what's out there on all of your favorite streaming platforms. Allow me to be your all-knowing guide.

For those of you who know Gellar best from Cruel Intentions, she got her start in commercials before joining the soap opera All My Children, where she won an Emmy for the role of Kendall. Sadly, she never received an Emmy nomination for her role unforgettable role in Buffy The Vampire Slayer, but what's past is past. Speaking of Buffy, the vampire slayer is still her biggest and most recognizable part.

Gellar has been in numerous movies and two big TV shows since then, but it's still hard not think about her character's devious machinations in Cruel Intentions. If you're ready to take a walk down memory lane in celebration of the movie's anniversary, then look no further than this list of SMG content worthy of a marathon.

There's no better place to start than with the birthday movie itself. As the picture-perfect mean girl, Gellar's role as Kathryn in Cruel Intentions is a delight to watch. Kathryn Merteuil is one of New York City's elite teens, and her world is filled with drugs, sex, and seduction. The premise revolves around a bet she makes with her stepbrother Sebastian (Ryan Phillippe), where the goal is for him to sleep with Annette (Reese Witherspoon), who has sworn off sex until she's married. It's obviously a little outrageous, but Gellar is delightfully brilliant at playing such an unapologetic villain.

A great Scooby-Doo movie and sequel, this live-action film is silly and expertly cast — especially Gellar as Daphne. Her real-life husband, Freddie Prinze Jr. plays Fred in the film. The best part of the movie is Gellar's version of Daphne. It's a nice, new take on the beloved cartoon character.

Another project that Gellar and Prinze Jr. came together for is Happily N'Ever After, a modern re-telling of classic fairytales. Gellar plays Cinderella, and Prinze plays her unlikely crush, Rick, a servant. It's set in a version of the tale where an all-knowing wizard is in charge of keeping the happy endings happy. But Cinderella's evil stepmother, voiced by Sigourney Weaver, has other ideas.

Watch On: Hulu or Amazon Prime

4. I Know What You Did Last Summer

One of the most well-known horror-slasher films, I Know What You Did Last Summer is all about reaping what you sow. Four teens do something terrible one summer night, and then try to forget about it once they cover their tracks. But of course, karma is not too kind, and it also knows what they did. Gellar plays pageant queen Helen Shivers, who is one of the best part of the film. The movie's also notable for being the first time the Buffy actor teamed up with future Cruel Intentions co-star Phillippe, and the film where she met Prinze Jr.

In this more recent heart-pounding drama, Gellar plays the title character Veronika, a depressed woman who attempts suicide only to wake up in an asylum with a fatal health condition. Viewers soon discover that her doctor is actually running an unorthodox institution, and it doesn't take long for all hell to break loose. The fast-paced movie is especially enjoyable if you love twists.

Gellar's Jess is a successful lawyer preparing for her first wedding anniversary with her husband, Ryan. However, his brother Roman is staying with them, and he's a bit of a bad dude. One day, the two brothers get in a car accident, leading to them both being in a coma. Roman wakes up, but claims he's Ryan in Roman's body. He urges Jess to believe him, knowing things that only Ryan could. This twisty film is definitely one of Gellar's most underrated.

Buffy needs no introduction. Gellar's turn as the vampire slayer who fights evil with the help of her Scooby Gang remains a classic.

Go forth and stream your hearts out, Cruel Intentions fans.