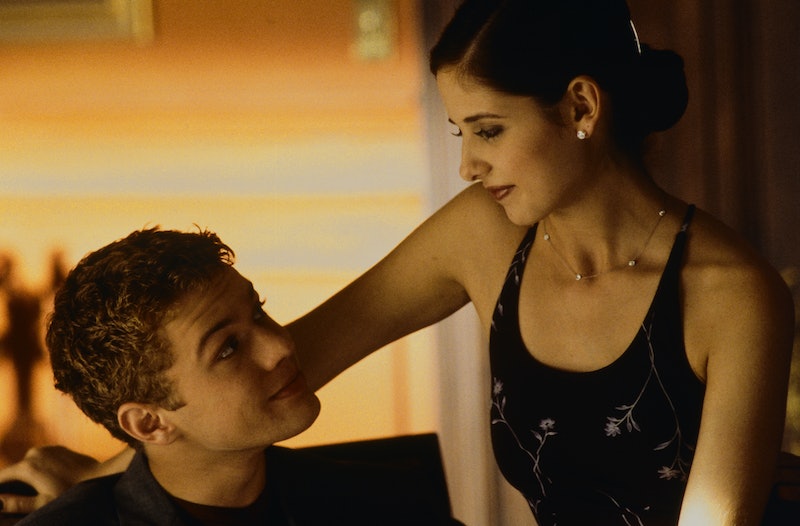 After months of teasing fans with extended contracts on the actors and shopping the project around to other outlets, the Cruel Intentions series is reportedly dead. Deadline confirmed Sarah Michelle Gellar's vicious villain Kathryn won't be stirring up trouble on the small screen anytime soon. While Sony is entertaining the idea of approaching the story from a different angle, the series focusing on Kathryn luring Sabastian's son Bash into the world of wealth and debauchery will never be — and it's definitely disappointing.

The TV reboot trend finally appears to be cooling, and for the most part, that's not a bad thing. Unless there is a compelling reason to adapt a classic film for TV or bring a beloved series back from the dead, the TV industry should opt for original ideas like 2016 hits The Good Place and Stranger Things. But in the case of Cruel Intentions, a story of corruption in the upper echelons of society was one worthy of being explored in 2017.

With a billionaire with no political experience about to ascend to the highest office in the land alongside a cadre of his wealthiest allies, a small-screen look inside the cutthroat policies of the elite would have been downright prescient. What is Kathryn if not a searing and fascinating indictment of the havoc unchecked power can wreak?

More than that, Gellar is long overdue for a TV comeback worthy of her talents. Failed series Ringer and The Crazy Ones never quite played to her strengths, but Cruel Intentions' Kathryn is a character she perfected long ago. Seeing her bring back the ferocious character that made Cruel Intentions a '90s classic would have been a highlight of 2017.

There is no way to know if the Cruel Intentions pilot was creatively sound or not, but there is no denying the promise inherent in the story's premise. If Cruel Intentions ever does make it to the small screen, I imagine it will be a straight remake of the movie, making the story more accessible to potential viewers. As it was imagined, the TV series was going to be a followup to the film, and there is certainly a case to be made as to why that is not the most profitable angle for Sony to take.

Nostalgia is not the reason I believe the original pilot idea taking place 15 years after the events of the film would have been a genius move, though. It's all about the timing, and the involvement of Gellar. If the pilot had moved forward, Cruel Intentions would have been in a position to offer brutal commentary on the current state of the world with a feminist bent.

Kathryn exists in a society dominated by white men with deep pockets. She sees the twisted games they play to stay on top, and she can play them all better and in heels. In Trump's America, Kathryn could have taken viewers inside the Machiavellian politics of business, and reminded everyone why even when it seems like the world has them down, women find a way to fight their way back to the top.

Real-life events turned the idea of a Cruel Intentions series into something more than novel. The story almost feels necessary now, and it is disappointing the story brimming with potential for sharp social commentary and feminist themes couldn't find a home. Cruel Intentions is the rare reboot that would have actually added something new to the television landscape.