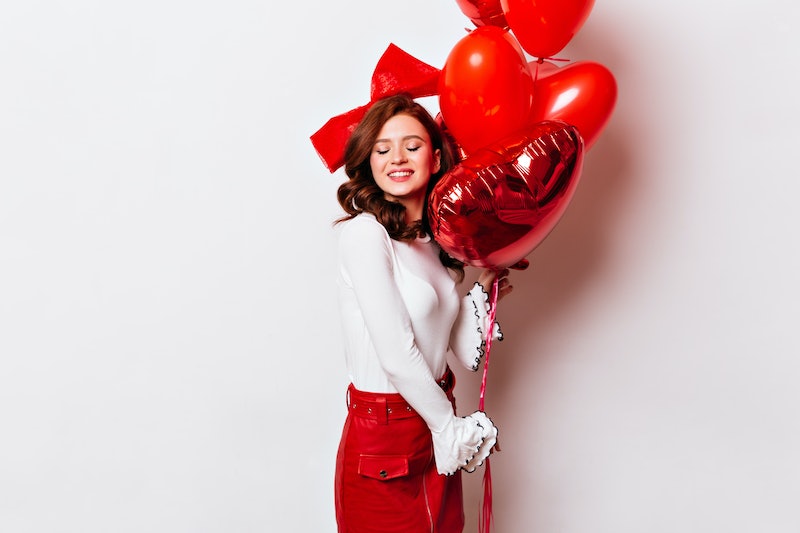 Mercury retrogrades are known to cause all kinds of issues and upsets when it comes to the Mercury-ruled areas of our lives. This includes communication, transportation, technology devices, scheduling, and rational thinking. Classic Mercury retrograde and retroshade mishaps include sending texts to the wrong person, missing a date due to traffic, showing up to wrong bar for happy hour, or hitting an annoying glitch in your dating app.

Clearly, this transit bodes poorly when it comes to clear communication and making plans with your partner come Valentine's Day — but there are plenty of precautions you can take to avoid some of the usual retroshade pitfalls. Bustle chatted with a few astrologers who gave us their tips on what every zodiac sign should and shouldn't do during Mercury retroshade Valentine's Day.

DO: Revisit, Review & Revise Your Relationships

Retrogrades aren't here to ruin your life. What they are here for is to get you to slow down and review the path you're on to be sure you're headed in the right direction. "Mercury Rx times are powerful revisiting and reintegration times," says astrologer Nura Rachelle. "The retrograde between Pisces to Aquarius brings in the component of discrimination and knowing the truth of your needs." In other words, view your relationship through a new and more discerning lens. Be confident you're giving your energy to the right person, or move on.

"With Mercury in Pisces in its shadow period (preparing to retrograde) and making a conjunction to Neptune in Pisces, [take] it slow when it comes to dating and commitment," says astrologer Six. "Take your time while getting to know and understand others." Pisces and its ruling planet Neptune have a tendency to obscure the truth, so be sure you're not projecting an idealized version of the truth onto your reality by rushing into something head first.

DO: Be Direct & Clear In Your Communication

As much as you may be tempted to wax poetic for Valentine's Day, don't. Beating around the bush and speaking in metaphors might feel romantic, but it isn't a good idea during Mercury retroshade. "This is when we can have communication mishaps, so be sure to say what you mean when speaking to your loved ones. Be direct," says tarot reader Sarah Potter. "And if you get a weird text from your sweetheart, ask for clarification before flying off the handle."

Pisces, the sign in which Mercury will begin its retrograde, has a tendency to live in a bit of a fantasy. If we lean too much into this energy during the retroshade, though, it could lead us straight into deception and heartbreak. "Don’t over idolize people, and if someone seems too good to be true, keep your eyes open," Six says. Don't let yourself get carried away in a wave of candy-and-flowers-induced emotion.

DO: Maintain Your Boundaries In Love

Maintaining your boundaries in love is a must under this retro-shady transit. "This is not the time for loose boundaries around love," Rachelle says. "Rather, it's time to look objectively at what is between you and the truth of unconditional love." Step back and ensure you're protecting your truth and your energy, and not giving it away to someone else.

DON'T: Expect To Get Places On Time

Mercury retrogrades and retroshades are notorious for throwing wrenches in your schedule. "Whether you’re going on a date with a new beau, an old friend, or your long time partner, give yourself plenty of time to get there so you aren’t late due to travel snafus," Potter says.

DO: Lean On Your Intellect & Journal Out Your Feelings

Planet Mercury is all about rational thinking. But as we approach this retrograde, we're likely to feel a sense of confusion. Journaling can help track and make sense of your feelings. "Writing is always a recommendation during Mercury retrograde times, especially in the Sun season of Fixed Air sign Aquarius, where [your] thought energy is stronger than usual," Rachelle says. "Using your intellect to help you align with the true needs of your heart can be the best strategy and step forward, in all kinds of relationship dynamics."

DON'T: Fall For A Case Of The Retrograde Ex

Retrogrades tend to make people want to revisit past relationships. "The retroshade is a notorious time for exes to come back around," Potter says. "So before you jump on that merry go round again, give yourself some time and space to check in and see if this person is worth a second chance."

More like this
The Top Mistakes Scorpios Make In Relationships (& How To Avoid Them)
By Nina Kahn
Why Virgo & Libra Can Make A Great Couple, According To Astrologers
By Kristine Fellizar
Your Daily Horoscope August 11, 2022
By Mecca Woods
Your Daily Horoscope For August 10, 2022
By Mecca Woods
Get Even More From Bustle — Sign Up For The Newsletter