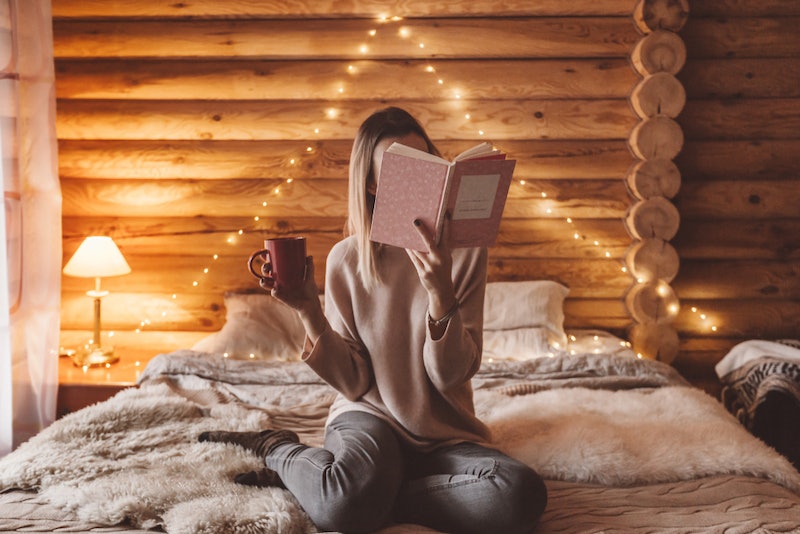 Mercury retrograde is over, they said. It will be fun, they said. Just when you thought the cosmos were lifting the curse known as Mercury retrograde, here comes its post-shadow period. Mercury retroshade Fall 2019 is here just in time for the holidays, and that can make for an additional messy couple weeks in several different ways. Mercury went direct and simultaneously entered its retroshade on Nov. 20, and will continue on its shady way through Dec. 7, when we'll finally have cleared it. 'Tis the season, y'all.

Before we get into the nitty gritty of what astrology has in store for us now, let me break down exactly what a retrograde shadow period is in the first place. For about two weeks before and after a planetary retrograde, we experience what's referred to as the pre- and post-retrograde shadow periods (or retroshades, for short). The pre-shadow period is when we first begin to feel the retrograde antics stirring, and it prepares us for the slowdown. The post-shadow period, on the other hand (which we'll be experiencing through the first week of December) is a time to integrate the lessons we've learned during the retrograde (and yes, we still feel the retrograde's effects here, too). If we jump straight back into our daily grinds without some retro-reflection, all the slow-down energy of the retrograde will have been for naught, so use this time wisely. We'll still be feeling the funky retrograde effects during the retroshade, so TBH, we'll sort of be forced take things slow and process what we've learned before moving forward again.

The majority of this particular retrograde (and its subsequent retroshade) takes place in the dark, intense water sign Scorpio. "Scorpio is the claw of justice," explains astrologer Lisa Stardust, who spoke with Bustle about the retroshade's effect on our lives. Scorpio energy is all about honesty and revenge, and it deals in private matters such as intimacy, sexuality, and finances. "This is why it’s important to be honest — no matter what," warns Stardust.

Anyway, it's not lost on any of us that this retroshade is taking place (rather inconveniently) right smack in the middle of the 2019 holiday season, when so many of us are traveling more, trying to pack more social events into our schedules, spending more money on holiday shopping, and overall feeling extra stress. It's annoying, to say the least. So when it comes to how Mercury retroshade will affect holiday activities like traveling, making holiday party plans, and gift shopping, there's a lot to keep in mind. "With Mercury Rx still affecting us until the 7th of December, 2019 — thanks to its shadow phase — celebrations like Thanksgiving, Black Friday, or trips for the holidays will be influenced by this phenomenon," explained astrologer Didi Daze in an interview with Bustle.

Take the usual retrograde precautions: quadruple-check your travel itineraries, make sure your phone is fully charged while on-the-go (and print copies of your boarding passes, if possible), save all receipts while gift shopping, read the fine print regarding return policies — and please, do your best to keep things light conversation-wise during family gatherings or Thanksgiving dinners. Communication is still cloudy during the retroshade, so the chances of a misunderstanding or words just coming out wrong are still higher than usual.

The retrograde may have also served up issues in the workplace — whether it's unfinished projects coming back to haunt you, major delays in current projects, or communication issues and drama with your coworkers. This retroshade is a time to consider why these issues happened, question if you're taking the right steps, and then start remedying the issues slowly. "The second Mercury retrograde shadow is all about integration and processing," wrote the AstroTwins on AstroStyle. "Sure, Mercury retrograde might throw our lives into a total tailspin, but what are the golden lessons to glean? What necessary losses and changes did Mercury retrograde prompt?" If you're looking to clean up messes at work, start new projects, or even switch careers, now's a time to start planting seeds and slowly begin picking up speed agin.

When it comes to relationships — whether love or friendship — we hope you took steps to prepare for Mercury retrograde fall 2019 by facing your affairs with honesty, even if it was difficult. Because TBH, this Scorpio-ruled retroshade is here to purge the truth out of us at all costs. "If people used the retrograde to heal and mend fences — or to come clean — then [the retroshade] will have a minimal effect," explains Stardust. "If not, then their shady acts will be exposed with even deeper repercussions." Consider this your official warning when it comes to dating and relationships during the retroshade. Don't be surprised if something you, your partner, or your friends have been hiding ends up coming out dramatically (the retroshade is shady like that). If it does, handle it with honesty — more lies will only complicate matters further.

But even if your relationships did take a hit during Mercury retrograde, there's still hope in using the shadow period's energy to fix them — perhaps you'll even make them stronger. "Use the time Mercury turns direct to the end of its shadow to make big, bold changes," shared the AstroTwins on AstroStyle. "For example, maybe you realize that your jerk of a boyfriend was actually just responding to YOU being subtly critical of his every move." The retroshade is a time you should spend reflecting on everything that came up during the retrograde, facing it with honesty and integrity, and making the necessary changes. If major miscommunications, malfunctions, or drama went down, don't wallow in your stress — do something about it. "The second half of the shadow is when you could practice a new, empowering way of speaking to [partners] and address conflicts," continued the AstroTwins. "This could be the relationship rescue remedy you need."