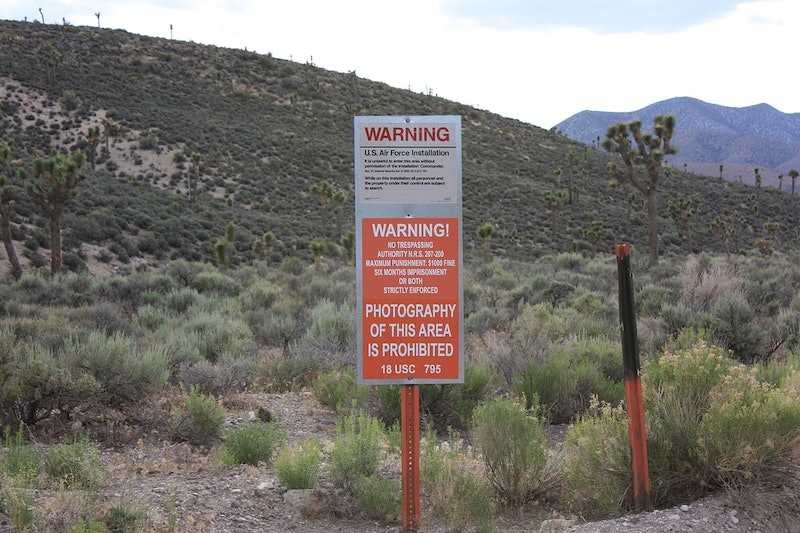 Unless you’ve been living under a rock, you’ve no doubt noticed that Area 51 has been back in the news again lately. However, it’s not because of anything weird going on there; it’s because a Facebook event encouraging people to “Storm Area 51” went viral recently. But although the whole thing is just a joke that got quite a bit out of hand, it does make you realize that there’s still a lot we don’t know about Area 51 — mostly because the government has never answered the vast number of questions that have been floating around about it for years. The silence doesn’t necessarily mean that there are, y’know, alien autopsies or whatever going on at the facility (in all likelihood, there probably aren’t) — but it does kind of make you… wonder. Just a little bit. Doesn’t it?

Located in the desert of Lincoln County, Nevada near the extremely tiny town of Rachel, the military facility frequently referred to as Area 51 is a part of the Nevada Test and Training Range, which is itself a part of the Nellis Air Force Base. Area 51's official names include Homey Airport and Groom Lake; in the past, it’s also been referred to as “Watertown Strip,” “Paradise Ranch,” and simply “the Ranch.” Very little is known about the base, though — and even though that’s to be expected of a military facility, the secrecy surrounding the place that has stoked conspiracy theories about it for decades.

The mildest of these theories suggest that the base has been used for the development of advanced technology and air crafts that have never been proven to exist — like, for example, the so-called “Aurora” aircraft. The more outlandish theories frequently have to do with ideas surrounding the existence of extraterrestrial life: That aliens have been traveling to Earth for years; that material from alien crafts crash landing on Earth have been taken to Area 51 for study; that autopsies of actual aliens have been carried out at the facility; and so on and so forth. Again, none of these theories has ever been proven to be true — but they persist all the same.

The U.S. government did finally acknowledge the existence of Area 51 in 2013; that’s when a report written in 1992 about the development of the U-2 spy plane — which was carried out at Area 51 — was declassified thanks to a FOIA request and released to the public. Many, many questions about the place still remain, though, a lot of which might continue to go unsolved for the foreseeable future. Here are just a few of the questions we still have about Area 51 the government has never directly answered:

More like this
Ashamed Of Your Screen Time Stats? Here's How To Change That
By Alexis Morillo
Learning To Love, Not Judge, The Lunchbox Wives Of TikTok
By Esther Zuckerman
How To Turn Off TikTok Profile Views So You Can Stalk Other Accounts In Secret
By Alexis Morillo
Pret & Costa’s Coffee Is The Strongest On The High Street, According To Which?
By Sam Ramsden
Get Even More From Bustle — Sign Up For The Newsletter
From hair trends to relationship advice, our daily newsletter has everything you need to sound like a person who’s on TikTok, even if you aren’t.